In the News: Case Keenum

God is in Control 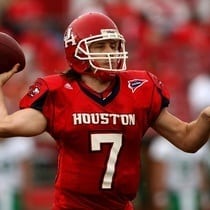 After only two seasons, University of Houston quarterback Case Keenum is already one of the most prolific passers in school history. He’s also the nation’s returning leader in total offense and considered one of the top returning players in 2009 by several national sports publications.

Keenum is a viable Heisman Trophy candidate, along with Sam Bradford (2008 winner), Tim Tebow (2007 winner) and Colt McCoy (2008 runner-up), as well as a candidate for the Maxwell Award.

And, while many college football experts are talking about a possible Heisman Trophy now, Keenum will be the first to tell you that God was also showing him patience during his first two seasons with the Cougars.

“As a redshirt freshman, it was a difficult situation because I was sharing time with another quarterback and we were competing for the starting quarterback position,” Keenum says. “It was tough because it seemed like, during practice, every mistake was magnified because we had a situation in Houston where we had two guys who were very capable and very competitive, and both of us wanted to be the starter. So when I’d throw an interception or make a bad read or make a bad play, I’d really beat myself up about it. I was finding that it was hard to sleep because I was so concerned about it.”

But soon Keenum began to realize that a starting position on a college football team, or anything else for that matter, was out of his hands.

“I realized that God was the one in control, not me,” he says. “I just decided that I was just going to do the very best I could and let God control the situation.”

And it wasn’t long before Keenum’s patience and preparation began to pay off as he competed in all 13 games, with seven starts, during his redshirt freshman year.  He was the team leader in passing yards and touchdown passes and ranked second on the team with nine rushing touchdowns and third with 414 rushing yards.

In his first collegiate appearance at Oregon, he threw for a game-high 179 yards and was 14-of-27 including a touchdown.

Now in his third full season, he’s ready to take the helm of the Cougars as their top quarterback.

“It’s a lot different situation now that I’ve established myself as the starter,” he says. “I can relax in the sense that I’m not worried about whether I’ll be the starter or not.  Now that that is settled, I can focus in on just helping our team win games and being the best we can be.”

Keenum added that, while it hasn’t been easy, he knows that the Lord has always been by his side whether he’s on the sidelines or on the field.

“One of my favorite Bible verses is Isaiah 40:31 which says ‘those who hope in the Lord will renew their strength. They will soar on wings like eagles they will run and not grow weary, they will walk and not be faint.’ To me, that’s a great verse to apply not just to sports, but to life off the field as well.”

Keenum added that pressures off the field can often be as great as those on it.

“There’s a lot of pressures that the game puts on you and I’ve certainly gone through every young man’s battle in regard to dating and other temptations that the world is always throwing at you,” he said. “As an athlete, you always have a bullseye on your back. People are always wanting things from you and it seems that there’s always temptations around the corner. And I know that those temptations will always be around. I’ll have them now and even after I’m older and married and out of football.”

This story was published in our Fall 2009 issue.