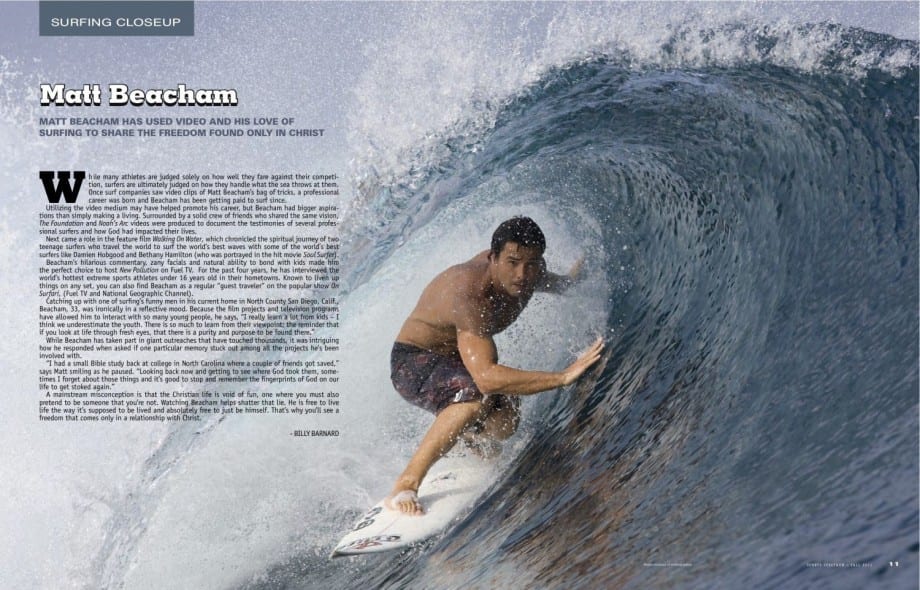 While many athletes are judged solely on how well they fare against their competition, surfers are ultimately judged on how they handle what the sea throws at them. Once surf companies saw video clips of Matt Beacham’s bag of tricks, a professional career was born and Beacham has been getting paid to surf since.

Utilizing the video medium may have helped promote his career, but Beacham had bigger aspirations than simply making a living. Surrounded by a solid crew of friends who shared the same vision, The Foundation and Noah’s Arc videos were produced to document the testimonies of several professional surfers and how God had impacted their lives.

Next came a role in the feature film Walking On Water, which chronicled the spiritual journey of two teenage surfers who travel the world to surf the world’s best waves with some of the world’s best surfers like Damien Hobgood and Bethany Hamilton (who was portrayed in the hit movie Soul Surfer).

Beacham’s hilarious commentary, zany facials and natural ability to bond with kids made him the perfect choice to host New Pollution on Fuel TV. For the past four years, he has interviewed the world’s hottest extreme sports athletes under 16 years old in their hometowns. Known to liven up things on any set, you can also find Beacham as a regular “guest traveler” on the popular show On Surfari, (Fuel TV and National Geographic Channel).

Catching up with one of surfing’s funny men in his current home in North County San Diego, Calif., Beacham, 33, was ironically in a reflective mood. Because the film projects and television programs have allowed him to interact with so many young people, he says, “I really learn a lot from kids – I think we underestimate the youth. There is so much to learn from their viewpoint; the reminder that if you look at life through fresh eyes, that there is a purity and purpose to be found there.”

While Beacham has taken part in giant outreaches that have touched thousands, it was intriguing how he responded when asked if one particular memory stuck out among all the projects he’s been involved with.

“I had a small Bible study back at college in North Carolina where a couple of friends got saved,” says Matt smiling as he paused. “Looking back now and getting to see where God took them, some- times I forget about those things and it’s good to stop and remember the fingerprints of God on our life to get stoked again.”

A mainstream misconception is that the Christian life is void of fun, one where you must also pretend to be someone that you’re not. Watching Beacham helps shatter that lie. He is free to live life the way it’s supposed to be lived and absolutely free to just be himself. That’s why you’ll see a freedom that comes only in a relationship with Christ.

Matt Beacham’s story was published in our current Fall 2011 issue. If you are a subscriber, you should be receiving your issue within the next two weeks. To become a subscriber or order this issue, call 1-866-821-2971 or click here.