In the News: Andy Dalton 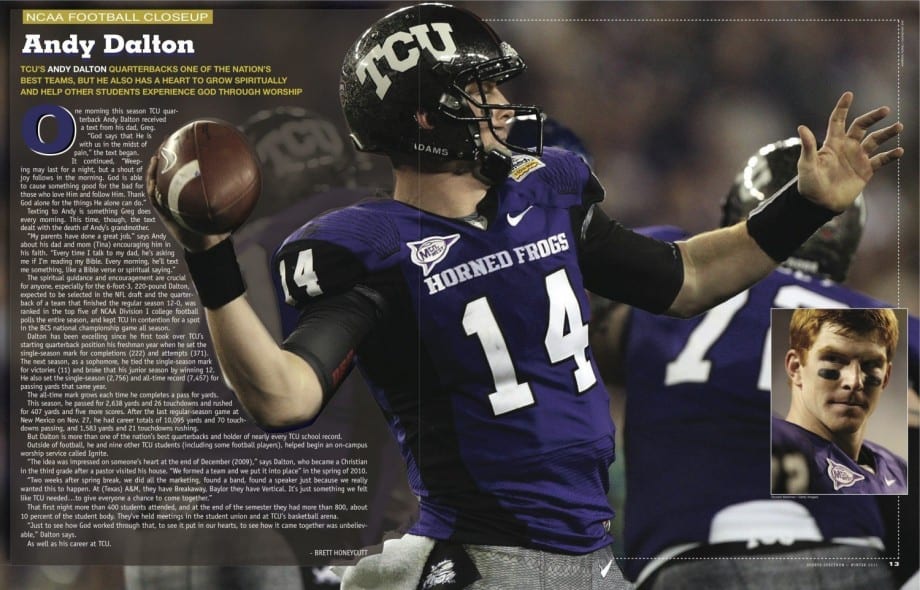 One morning this season TCU quarterback Andy Dalton received a text from his dad, Greg.

“God says that He is with us in the midst of pain,” the text began.

It continued, “Weeping may last for a night, but a shout of joy follows in the morning. God is able to cause something good for the bad for those who love Him and follow Him. Thank God alone for the things He alone can do.”

Texting to Andy is something Greg does every morning. This time, though, the text dealt with the death of Andy’s grandmother.

“My parents have done a great job,” says Andy about his dad and mom (Tina) encouraging him in his faith. “Every time I talk to my dad, he’s asking me if I’m reading my Bible. Every morning, he’ll text me something, like a Bible verse or spiritual saying.”

The spiritual guidance and encouragement are crucial for anyone, especially for the 6-foot-3, 220-pound Dalton, expected to be selected in the NFL draft and the quarterback of a team that finished the regular season 12-0, was ranked in the top five of NCAA Division I college football polls the entire season, and kept TCU in contention for a spot in the BCS national championship game all season.

The all-time mark grows each time he completes a pass for yards.

This season, he passed for 2,638 yards and 26 touchdowns and rushed for 407 yards and five more scores. After the last regular-season game at New Mexico on Nov. 27, he had career totals of 10,095 yards and 70 touchdowns passing, and 1,583 yards and 21 touchdowns rushing.

But Dalton is more than one of the nation’s best quarterbacks and holder of nearly every TCU school record.

Outside of football, he and nine other TCU students (including some football players), helped begin an on-campus worship service called Ignite.

“The idea was impressed on someone’s heart at the end of December (2009),” says Dalton, who became a Christian in the third grade after a pastor visited his house. “We formed a team and we put it into place” in the spring of 2010.

“Two weeks after spring break, we did all the marketing, found a band, found a speaker just because we really wanted this to happen. At (Texas) A&M, they have Breakaway, Baylor they have Vertical. It’s just something we felt like TCU needed…to give everyone a chance to come together.”

That first night more than 400 students attended, and at the end of the semester they had more than 800, about 10 percent of the student body. They’ve held meetings in the student union and at TCU’s basketball arena.

“Just to see how God worked through that, to see it put in our hearts, to see how it came together was unbelievable,” Dalton says.

As well as his career at TCU.

Top QB prospect Cade Klubnik picks Clemson, thanks parents for helping him be 'man of Christ'