From the Archives: Aaron Rodgers 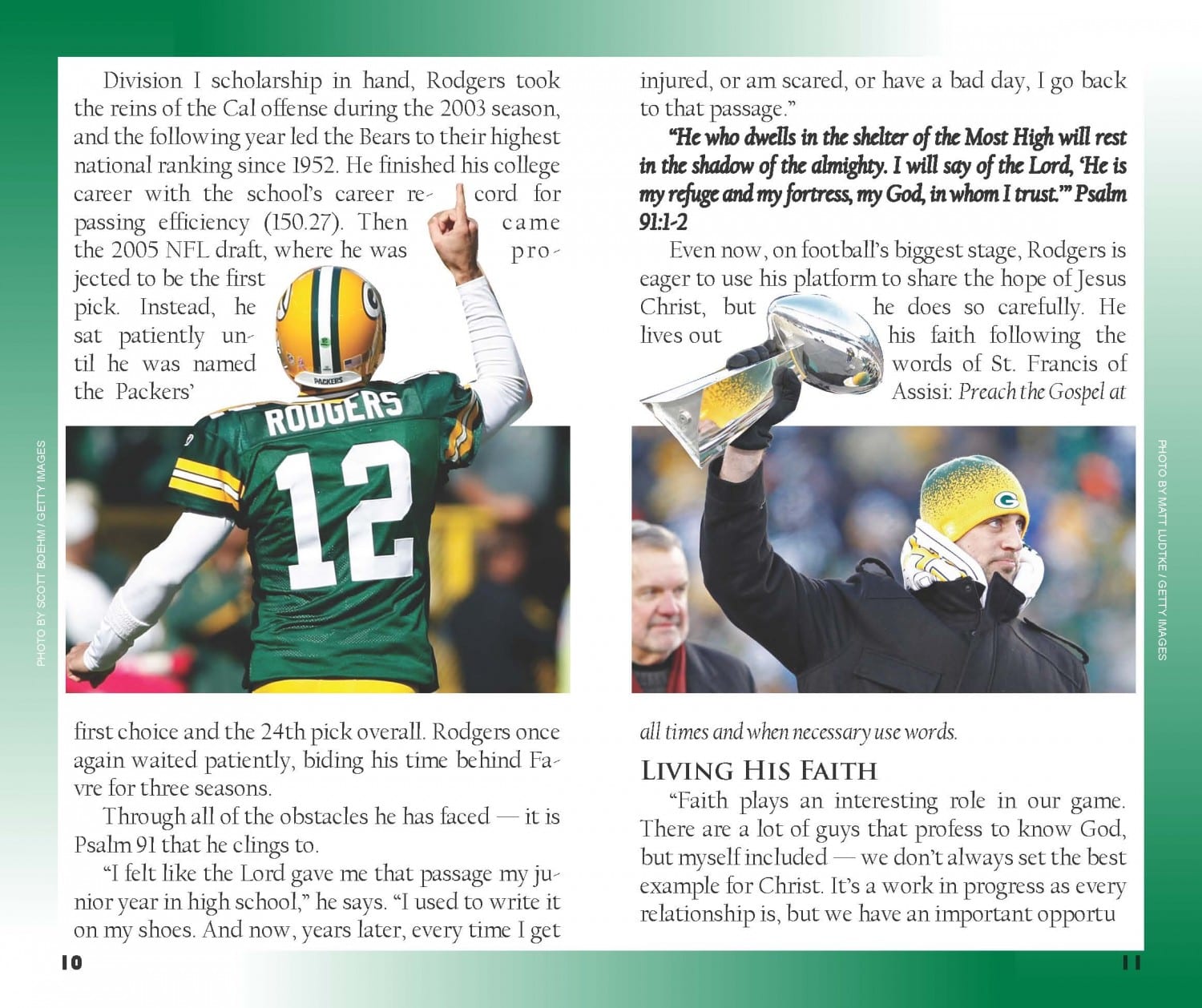 Green Bay Packers quarterback Aaron Rodgers may not have the Hall of Fame numbers that predecessor Brett Favre has, but he has succeeded in winning over diehard fans who mourned Brett Favre’s controversial exit prior to the start of the 2008 season.

These aren’t typical football fans either. Packers fans actually own their hometown team, boasting more than 112,000 local shareholders, and enthusiastically endure sub-zero temperatures in the stands at Lambeau Field. They also wear their game gear to church on Sundays — and leave early if the pastor has mistakenly preached past noon.

“Aaron had big shoes to fill when he stepped in, and we think he has done very well proving himself on the field and leading the team, despite the situation he was in,” says one local shop clerk.

He proved himself in a big way on Feb. 6, 2011, when he led Green Bay to a 31-25 victory against the Pittsburgh Steelers in Super Bowl XLV at Cowboys Stadium in Arlington, Texas.

Rodgers earned MVP of the game after completing 24 of 39 passes for 304 yards and three touchdowns.

As sports commentators said early in Rodgers’ first season after succeeding Favre, no young player had ever faced more pressure than Rodgers, and no other young quarterback had ever been in the situation he faced — the legend retiring, then wanting to return after Rodgers had been named the starter, and the friction that ensued between the team management and Favre prior to his release.

“The best part was that it was an opportunity for me to speak honestly and openly in the midst of strong adversity and a difficult situation,” says Rodgers, who routinely had 50 cameras at his locker after practice. “Either myself or Brett was the leading story on SportsCenter every day, and I knew that the way I handled the situation would be remembered for a long time. The way I handled it hopefully said a lot to my teammates, the fans, my family members and my friends back home.”

It spoke volumes about his character, as well as his confidence as a leader on the field. In his first NFL start, he earned a spot in the record books with an 81.1 percent completion rate, beginning a pattern of consistency successful signal callers possess. And according to Rodgers, the key to that consistency is confidence by way of preparation.

“The way I prepare each week, the film I watch, how hard I practice, the notes I take in meetings — all of those things allow me to have a lot of confidence when I go into the game,” says Rodgers, who earned a spot on the Pro Bowl team in 2009 and was the 2010 FedEx NFL Player of the Year. “I’m going through reps I’ve already done and looks I’ve already seen on film or in practice. My confidence level is so high when I get in the game that I expect to play well.”

Rodgers, who has passed for nearly 12,500 yards and 90 touchdowns, and has rushed for almost 1,000 yards and 13 touchdowns since taking over for Favre, relishes being a leader on the field.

“Any sport I’ve played, I’ve always wanted to be in the position where you can have a great impact on the game,” he says. “I’m not saying the quarterback is the only position in football, but it’s a very important one.”

Growing up as a middle child in a household of boys, Rodgers credits his even-keeled temperament and his ability to be a peacemaker as an invaluable leadership asset for his day job. “You have to help the older brother and younger brother get along. Likewise, on the field you have to be able to get everyone on the same page, and have your confidence filter out to those guys.”

To understand that confidence, you have to take a closer look down the road that brought the California native to the place he is today. Rodgers grew up in a Christian home, but it wasn’t until the spring of his junior year of high school that he faced a crossroads about the path he would follow in life.

“Before that point, I went to church because my parents went to church,” he admits. “But when I was 17, I realized I had to make a choice because I was starting to do some things that my buddies were doing, and I knew deep down that it wasn’t right. I rededicated my life to the Lord. Ever since then I fall on my face and get back up, get on my knees and confess, and keep on trying to live for Jesus. It’s not easy. It’s daily dying to yourself and prioritizing your time.”

It was after that decision that Rodgers’ journey to the NFL began. His senior year of high school came to an end without a college scholarship in sight, and it was while quarterbacking at a junior college that he caught the eye of California Berkley head coach Jeff Tedford, who noticed Rodgers on a scouting tape featuring one of his Butte College teammates.

Division I scholarship in hand, Rodgers took the reins of the Cal offense during the 2003 season, and the following year led the Bears to their highest national ranking since 1952. He finished his college career with the school’s career record for passing efficiency (150.27). Then came the 2005 NFL draft, where he was projected to be the first pick. Instead, he sat patiently until he was named the Packers’ first choice and the 24th pick overall. Rodgers once again waited patiently, biding his time behind Favre for three seasons.

Through all of the obstacles he has faced — it is Psalm 91 that he clings to.

“I felt like the Lord gave me that passage my junior year in high school,” he says. “I used to write it on my shoes. And now, years later, every time I get injured, or am scared, or have a bad day, I go back to that passage.”

He who dwells in the shelter of the Most High will rest in the shadow of the almighty. I will say of the Lord, ‘He is my refuge and my fortress, my God, in whom I trust.’ Psalm 91:1-2

Even now, on football’s biggest stage, Rodgers is eager to use his platform to share the hope of Jesus Christ, but he does so carefully. He lives out his faith following the words of St. Francis of Assisi: Preach the Gospel at all times and when necessary use words.

“Faith plays an interesting role in our game. There are a lot of guys that profess to know God, but myself included — we don’t always set the best example for Christ. It’s a work in progress as every relationship is, but we have an important opportunity as Christians in the NFL to use that platform to glorify God and I don’t think you have to be the most vocal guy in the media.”

“He has handled himself with great character, and character is the key to being the voice box he wants to be without saying a word,” says assistant team chaplain Troy Murphy. “You can tell that he genuinely cares for people, and that’s very evident in his life.”

Rodgers acknowledges that NFL players have so many things within their grasp — including money, fame, and opportunity. But there is something decidedly different about guys who are content with what they’ve been given and are living their lives for Christ.

“There are so many of us that are trying to fill that God-shaped hole in our heart with different things,” Rodgers says. “We realize that there has to be something more.”

And what does he say to athletes who believe that playing sports is their sole purpose in life?

“You’re gonna get let down because sports aren’t forever,” he replies. “Every practice or game could be your last. You have to put your hope in something that’s more stable. And God’s proven that He’s stable and is going to last a lot longer than your sport. You can’t take your records, stats and money with you into the next life, so you need to plan for that as well as life after football.”

“If I’m lucky to play 10 (years) — and I live to be 70 — I better have something to do the next 40 years of my life that fulfills me outside of sports and can give me a purpose.”

The near future, though, is certain for the young quarterback, whose contract with the Packers runs through the 2014 season.

“Just to be able to play the way I did starting the season definitely helped, but [the extension] was still a little unexpected,” Rodgers said at the time. “This definitely means a lot to me that they are saying I am going to be the guy for the future.”

Rodgers has clearly emerged from the shadow of a legend, and is now casting his own.