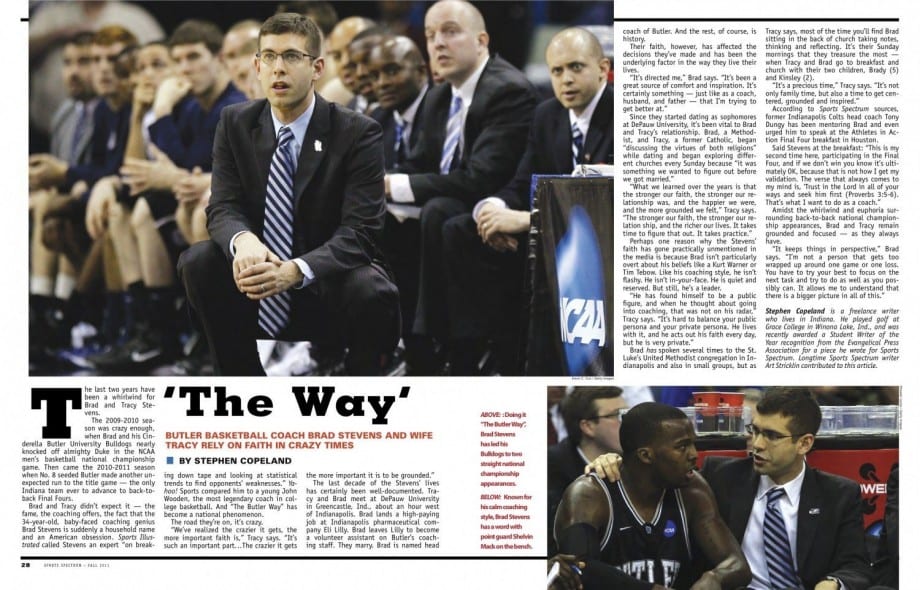 The last two years have been a whirlwind for Brad and Tracy Stevens.

The 2009-2010 season was crazy enough, when Brad and his Cinderella Butler University Bulldogs nearly knocked off almighty Duke in the NCAA men’s basketball national championship game. Then came the 2010-2011 season when No. 8 seeded Butler made another unexpected run to the title game—the only Indiana team ever to advance to back-to- back Final Fours.

Brad and Tracy didn’t expect it—the fame, the coaching offers, the fact that the 34-year-old, baby-faced coaching genius Brad Stevens is suddenly a household name and an American obsession. Sports Illustrated called Stevens an expert “on breaking down tape and looking at statistical trends to find opponents’ weaknesses.” Yahoo! Sports compared him to a young John Wooden, the most legendary coach in college basketball. And “The Butler Way” has become a national phenomenon.

The road they’re on, it’s crazy.

“We’ve realized the crazier it gets, the more important faith is,” Tracy says. “It’s such an important part…The crazier it gets the more important it is to be grounded.” The last decade of the Stevens’ lives has certainly been well-documented. Tracy and Brad meet at DePauw University in Greencastle, Ind., about an hour west of Indianapolis. Brad lands a high- paying job at Indianapolis pharmaceutical company Eli Lilly. Brad leaves Lilly to become a volunteer assistant on Butler’s coaching staff. They marry. Brad is named head coach of Butler. And the rest, of course, is history.

Their faith, however, has affected the decisions they’ve made and has been the underlying factor in the way they live their lives.

“It’s directed me,” Brad says. “It’s been a great source of comfort and inspiration. It’s certainly something—just like as a coach, husband and father—that I’m trying to get better at.”

Since they started dating as sophomores at DePauw University, it’s been vital to Brad and Tracy’s relationship. Brad, a Methodist, and Tracy, a former Catholic, began “discussing the virtues of both religions” while dating and began exploring different churches every Sunday because “it was something we wanted to figure out before we got married.”

Perhaps one reason why the Stevens’ faith has gone practically unmentioned in the media is because Brad isn’t particularly overt about his beliefs like a Kurt Warner or Tim Tebow. Like his coaching style, he isn’t flashy. He isn’t in-your-face. He is quiet and reserved. But still, he’s a leader.

“He has found himself to be a public figure, and when he thought about going into coaching, that was not on his radar,” Tracy says. “It’s hard to balance your public persona and your private persona. He lives with it, and he acts out his faith every day, but he is very private.”

Brad has spoken several times to the St. Luke’s United Methodist congregation in Indianapolis and also in small groups, but as Tracy says, most of the time you’ll find Brad sitting in the back of church taking notes, thinking and reflecting. It’s their Sunday mornings that they treasure the most—when Tracy and Brad go to breakfast and church with their two children, Brady (5) and Kinsley (2).

“It’s a precious time,” Tracy says. “It’s not only family time, but also a time to get centered, grounded and inspired.”

According to Sports Spectrum sources, former Indianapolis Colts head coach Tony Dungy has been mentoring Brad and even urged him to speak at the Athletes in Action Final Four breakfast in Houston.

Said Stevens at the breakfast: “This is my second time here, participating in the Final Four, and if we don’t win you know it’s ultimately OK, because that is not how I get my validation. The verse that always comes to my mind is, ‘Trust in the Lord in all of your ways and seek him first (Proverbs 3:5-6). That’s what I want to do as a coach.”

Amidst the whirlwind and euphoria surrounding back-to-back national championship appearances, Brad and Tracy remain grounded and focused — as they always have.

“It keeps things in perspective,” Brad says. “I’m not a person that gets too wrapped up around one game or one loss. You have to try your best to focus on the next task and try to do as well as you possibly can. It allows me to understand that there is a bigger picture in all of this.”

THE INCREASE: Unfazed by the Unexpected - Nick Ahmed