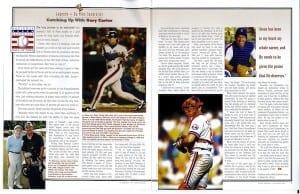 Baseball Hall of Famer Gary Carter passed away last week, succumbing to his battle with brain cancer at the age of 57. Carter, an 11-time All-Star, had a .264 career batting average, hit 324 career home runs, drove in 1,225 RBIs and had three Gold Gloves. Carter played for the Montreal Expos, and with the New York Mets, the latter of which he won a World Series with in 1986. He also played for the Los Angeles Dodgers and San Francisco Giants in the later stages of his career before finishing back in Montreal.

Below is a quote taken from Carter’s website about his heavenly Hall of Fame inclusion:

“The Baseball Hall of Fame is something every player dreams about, but being a member of God’s Hall of Fame is the greatest achievement of all. God offers each of us the gift of eternal life through Jesus Christ. When we accept God’s gift of salvation, our name is written in The Book of Life, guaranteeing us a place in heaven forever.”

“I made that decision during spring training in 1973, and prayed asking Jesus to come into my heart as Lord and Savior. It was then that I first realized that when Jesus died on the cross, he died for me and paid for my sins.  Accepting his payment was all I needed to do.  I couldn’t earn my way into heaven. You can become a member of God’s Hall of Fame too, by making the same decision today.”

Here is Gary Carter’s final MLB at-bat with the Expos. It ended up being a game-winner.

Over the weekend, ESPN Mobile published a headline with a racial slur in regards to Jeremy Lin. ESPN has fired that editor who claimed that it was an “honest mistake” and had used that headline “at least 100 times” in other headlines. The editor apologized for the headline and said he is a big fan of Lin, especially because Lin is outspoken about his Christian faith, like himself.

Josh Hamilton appeared on Glenn Beck TV last week in an interview with pastor Dr. James Robison to talk about his relapse with alcohol, battling demons, and how he is undergoing a makeover with the help of Christian counseling. Watch the interview below:

THE INCREASE: Laughter is the Best Medicine - Steven Souza

Chiefs owner Clark Hunt after 2nd AFC title: 'The Lord has blessed our family in so many ways'