Nored's journey at Butler near complete 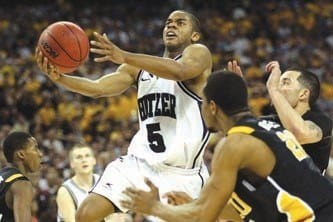 Fearing the future can be like a small flame that ignites into a fire.

But that’s a barbecue Butler University senior co-captain Ronald Nored would rather forgo. And it’s an inferno he’d rather extinguish with the lessons of his past.

After all, what’s to fear when you bask in your blessings? When you’re overcome by the divine direction of your story?

Ronald Nored says he was 85 percent certain he was going to leave Butler following his freshman year.

That was before the spotlight. Before the national championship appearances. Before Indianapolis Star beat reporter David Woods wrote “Underdawgs” and before live mascot Blue II became the most popular canine in the country with nearly 9,000 Twitter followers. (Seriously.)

“I didn’t know if Butler was the place I wanted to be,” says Nored, the Bulldogs’ floor general. “I just felt like there was nothing there for me. Though I enjoyed my basketball season, I really missed home. And I was just at rock bottom.”

He wanted to be back in Birmingham with his mother, Linda, and brother, Randall. Five years prior, his father, Ronald Nored Sr., had died of pancreatic cancer. And the move to Butler—even though he was close to his grandparents’ Indianapolis home—made it feel as if his mother and brother had been stripped away, too.

Not to mention his commitment to Butler was late and unexpected. His senior year of high school, he signed with Western Kentucky University. It was only three hours away, he was guaranteed to play, and it seemed like a perfect fit—that is, until Nored picked up a newspaper at an airport in April and read that Western Kentucky’s head coach, Darrin Horn, had accepted the head coaching position at the University of South Carolina.

Thanks for the notification.

“It was devastating because no one called him and told him,” Linda says. “That’s tough for an 18-year-old kid.”

All of those factors contributed to Nored’s insecurity during his freshman season at Butler. He committed late to the program to begin with. And he pined for sweet home Alabama.

It was during those times, however, that his high school coach, Tim Shepler, told Nored to stay strong. “Don’t be so quick to jump,” Shepler told him. “When Moses was in the desert, God spoke to him. God taught him how to be a leader.”

Whenever Nored visited his grandparents as a kid, he rode his bike around Butler’s campus. His mother even remembers taking him to Hinkle Fieldhouse to shoot around while he was in high school, only to be kicked off the floor one time by none other than Butler coach Brad Stevens because the Bulldogs were about to have practice.

“What?!? I did that?!?” Stevens exclaimed when Nored reminded him of it.

But there’d be no more kicking him off the floor once Nored committed to Butler. He wasn’t just a part of one national champion runner-up team but two of them—the most prestigious era in Butler basketball.

“God’s almost funny,” Nored laughs. “It’s like he was saying, ‘You see what would have happened if you left?’”

Linda remembers her son “turning the corner” when he returned to Birmingham for a school break his sophomore season. When it was about time to fly back to Indianapolis, he said, “Well, I better get my stuff packed to go back home.”

“Oh my gosh,” Linda thought to herself, admittedly being a little jealous. “He just called Indianapolis home.”

A year before, he wanted out of Indy. He didn’t understand why he was eight hours north of Alabama when he says God could just as easily use him down in Birmingham. But he listened to his mother when she told him, “We can’t put God in a box.”

If he would’ve put God in a box, he wouldn’t have experienced two national championship games. Who knows if Butler would have even made it? Shepler was right, too. It was in the desert that Nored became a leader.

After the national championship loss to Duke at Lucas Oil Stadium in Indianapolis, 25 of his family members and friends, including Shepler, gathered back at Nored’s grandparents’ home.

Nored walked into the house and found his mother. “I’d like to say something,” he said, merely hours after one of the most heart-breaking losses in national championship history—when Gordon Hayward’s half court heave rattled out as the Bulldogs lost in their hometown.

Nored stood up. Everyone listened. “I want to thank everyone for coming to see us play,” his mother recalls Nored saying. “All of you don’t even know each other. But here we are…in this room…and basketball brought us together. And that’s why I know God is using basketball in my life…so that I can spread His word.”

“That’s when I knew Ronald was becoming a man,” Shepler told Linda.

He was a leader.

Perhaps success is where the true nature of a man and leader is exposed. Though Nored has enjoyed his unexpected ride at Butler, it’s also come with a whole new set of challenges.

“It’s a lot harder when you are making two runs to the Final Four to depend on God through all of it,” he says. “When you are on the complete opposite side (of the desert)—when everything is going right, when everybody loves you, when there is literally nothing that can go wrong—you have to think, ‘Are you starting to depend on yourself? Or are you still at that point where you’re still depending completely on God?’”

As a young college kid, Nored could’ve had the world. He was known by college basketball fans across the country. He was recognized wherever he went. People wanted autographs. They wanted a piece of the guy who was a staple to Butler’s back-to-back national championship teams.

When people experience success, Nored believes they can go one of two ways. They can either become consumed in the world, or they can allow their platform to grow and impact others. He’s chosen the latter.

Nored’s father, by the way, was also a preacher.

Following Butler’s 69-44 victory against University of Illinois-Chicago on Feb. 21, Nored stands in front of a packed-out Hinkle Fieldhouse. He loves them, and they love him. It’s Senior Night, and he’s home.

But in three months, come graduation, he may have a new home. Nored—though a talented player who could probably play overseas and a skilled teacher who has made a vast impact while student-teaching in Indianapolis the last year—plans on doing something he’s never done before. He wants to enter college coaching.

And unlike four years ago, this time, it’s okay. The unknown is no longer a desert. Instead, there’s a fire and an excitement for the future because he believes someone else is in control.

“I’m ready to see what God has next,” Nored says. “For me, changing into a new phase is exciting because the possibilities are endless. As long as we are faithful to Christ and living a life that reflects that of Jesus, God will use us wherever we are. Regardless of where I am, God is going to use me.”