Around the Net - March Madness with the Zeller Bros. 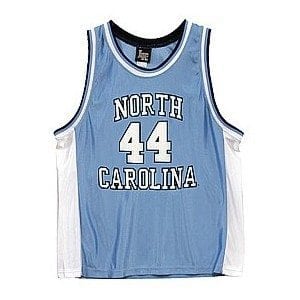 The Zeller brothers have fired up their hometown of Washington, Ind. for March Madness. People throughout the town have been seen wearing Tar Heel blue or Indiana crimson in support of Washington’s favorite sons. Zeller jerseys have been flying off the racks as places like Hibbett Sporting Goods can’t keep enough IU and UNC gear in stock.

”We can’t keep the Cody Zeller jerseys in stock,“ said Hibbett assistant manager Brenda Dillon. ”We sell so much Indiana stuff it is unbelievable, and definitely North Carolina stuff is our second best seller.“ (Courier Journal)

Tyler Zeller has been named Second-Team All-America by the U.S. Basketball Writers Association (USBWA). Tyler is also this year’s ACC Player of the Year, an award a North Carolina senior has not won since Phil Ford in 1978.

Tyler and the North Carolina Tar Heels earned a No. 1 seed in the upcoming NCAA tournament and will face the No. 16 (winner between Lamar and Vermont in the First Four). Tyler, who was featured in the Fall 2012 issue of Sports Spectrum, looks to lead the Tar Heels to their sixth NCAA Championship, which would be their third in the past decade.

“He’s maybe not quite as flamboyant as some people would be, or outrageous,” Tar Heels Coach Roy Williams said.

Though he does get vocal when needed:

“When he’s out on the court in practice and something’s not going well, he’ll say something in a definitive tone,” Williams said. (New York Times)

About the college life, Tyler told Sports Spectrum, “It can be difficult to stay active in your faith as a college student. It’s easy to get busy with studies and basketball.”

“I’ve just never done the party scene, and you just have to trust the Lord to help you stay away from certain influences. I know He has helped me a lot in that respect and He will never give you a situation you cannot handle.”

Cody is the Big Ten Freshman of the Year and appears in the current Winter 2012 DigiMag issue of Sports Spectrum. A four-page feature on Cody is also in our upcoming Spring 2012 issue. Click here to subscribe.

Tom Crean: It’s a big deal to have this day (insidethehall.com)