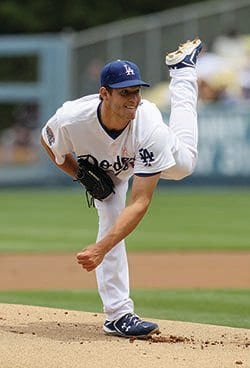 Los Angeles Dodgers ace Clayton Kershaw is unhappy with the way he has thrown his slider during Spring Training. Kershaw and pitching coach Rick Honeycutt feel that it has been inconsistent.

Despite the struggles with one of his best “out” pitches, Kershaw is ready for the start of the season, and is thrilled with the new ownership group that just bought the Dodgers for a record 2 billion dollars, which includes legendary LA Laker, Magic Johnson.

“I didn’t expect to hear for a couple days, so I was surprised to hear so soon,” Kershaw said. “But I’m glad it’s over. I’m glad we have an owner now.” (LA Times)

Kershaw is second on our list of the top five Christians to watch in Major League Baseball this season in our 2012 MLB Preview DigiMag, which you can read below:

Tyler Zeller’s North Carolina Tar Heels fell short of their quest for an NCAA Championship this season with a loss to Kansas in the Elite 8. North Carolina was forced to play without starting point guard Kendall Marshall, who had a broken wrist.

Zeller, a senior, has played his final game for North Carolina.

“It all comes back to my faith. My faith has got me through a lot of things,” Zeller said. “I think my faith is the reason I am who I am today.”

“Everything happens for a reason. I don’t know why it is. I don’t. I may question why God put us in this situation, but at the same time, he has a reason for everything. So you just got to accept it. And unfortunately, it hurts extremely bad right now. Maybe I’ll understand it later. Maybe I won’t. But you just got to go with it.” (The News and Observer)

That didn’t take long did it? Butler’s senior point guard Ronald Nored, who just played in his final game for the Bulldogs last week, has been named the head coach of Brownsburg High School, where former Butler teammate and Utah Jazz forward Gordon Hayward attended.

“Of course, we were invested in Hayward, but what made many of us fall in love with the Butler program is the character demonstrated by the team and coach (Brad) Stevens through their culture described as the Butler Way,” said Greg Hill, the Brownsburg athletic director. “Ronald Nored exemplifies that culture.” (Indianapolis Star)

Nored is featured in the Spring issue of Sports Spectrum and his extended story can be read online, right here: Nored’s journey at Butler near complete

Tim Tebow at center of lawsuit by Nike filed against Reebok (NJ.com)