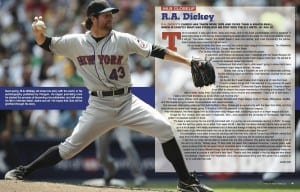 R.A. Dickey stays in the headlines

Though R.A. Dickey’s scoreless inning streak came to an end and he looked ordinary in the Mets’ loss to the Yankees on Sunday, his breakout season remains one of the top sports stories in 2012. Like Tim Tebow and Jeremy Lin, Dickey–Sports Spectrum‘s May DigiMag cover boy–is another Christian athlete who has captivated the nation and dominated the headlines.

Six years ago, he was a 30-something career minor leaguer who’d latched on to the knuckleball in a final, desperate last attempt to make the show. In his first start with the Texas Rangers in ‘06, he gave up six homers before he was sent back to the minors. He then spent time with three different organizations before the Mets took a flier on him in 2010 and signed him to a minor-league deal.

Two years later, he’s the best starting pitcher in the majors and he’s putting up numbers that beggar belief. Before last night’s outing against the Yankees, he was 11-1, tied for the major-league lead with a 2.00 ERA and third with 103 strikeouts.

Did we mention his breakout season came when he was 37?

But there’s so much more to his story. A survivor of sexual abuse, he climbed Mt. Kilimanjaro this summer to raise funds and awareness about sex-trade trafficking in India. He is literate (he calls the knuckler, “an inherently untrustworthy pitch”), funny, compassionate and courageous; in short, the kind of athlete who should be held up as a role model for all.

In this case, it would also be fully deserving.

On the 18th tee at the Travelers Championship on Sunday, Hunter Mahan’s caddie, John Wood, spotted John Finn and his family behind the tee box. Wood pushed Finn in his wheelchair down the fairway as Mahan went on to birdie the 18th hole. (Mahan has never been featured in Sports Spectrum but is part of the “Golf Boys” with Bubba Watson and Ben Crane, whom Sports Spectrum has featured.) Watch the video here.

And as Mahan, en route to the round of his life, walked down the middle of fairway, Finn and his wheelchair was right there next to him, being pushed by Wood, who exorted the crowd to cheer this inspiring young man.

David Finn first met Mahan about five years ago and ever since, has made it a point to go to and cheer on Mahan whenever he’s playing in the region. And it seems every time Finn comes to a tournament to root for his friend, good things happen.

After barely missing the Olympic diving team in 2004, Brittany Viola secured her trip to London with a dominant performance on Sunday in the Olympic Trials.

In 2006, I went to an eating disorder facility in Arizona called Remuda Ranch with bulimia. It was there that I accepted Jesus into my heart and life, prayed out loud for the first time, and experienced what real, honest, and sincere relationships were. As I started college at the University of Miami that summer, I fell right back into my old struggles. As my sophomore year began, a diving teammate, Heather Bounds, invested her time, wisdom, and love in my life. Transformation took root. In all that I did, I had purpose to work with all my heart, soul, mind, and strength. Better yet, I did not have to go after my pursuits alone. I became more involved in school and my diving took off to another level. How I used my free time also started to change. I attended University Baptist Church in Coral Gables and served as a middle school small group leader. I also joined weekly bible studies and went to Athletes in Action’s Ultimate Training Camp.
(A conversation with U.S. Olympian Brittany Viola, blog.beliefnet.com)

@aaronbadds: Even though few may stand &proclaim Your great Name its the life I want to live cause Im convinced there none like You! #Jesus @jeremycamp

@RashadJennings: I have realized I haven’t been following Christ in areas which I thought I had it together. Thank you God for forgiveness. Keep me in humility.

@ATolliver44: Church always picks me up…but also let’s me know I have a looong ways to go! #iJnip #2blessed2Bstressed

Around the Net is your online hub for faith and sports.

Raiders QB Derek Carr: 'Today is the day to get it right' with God

THE INCREASE: Refocus and Step Up - Nate Augspurger