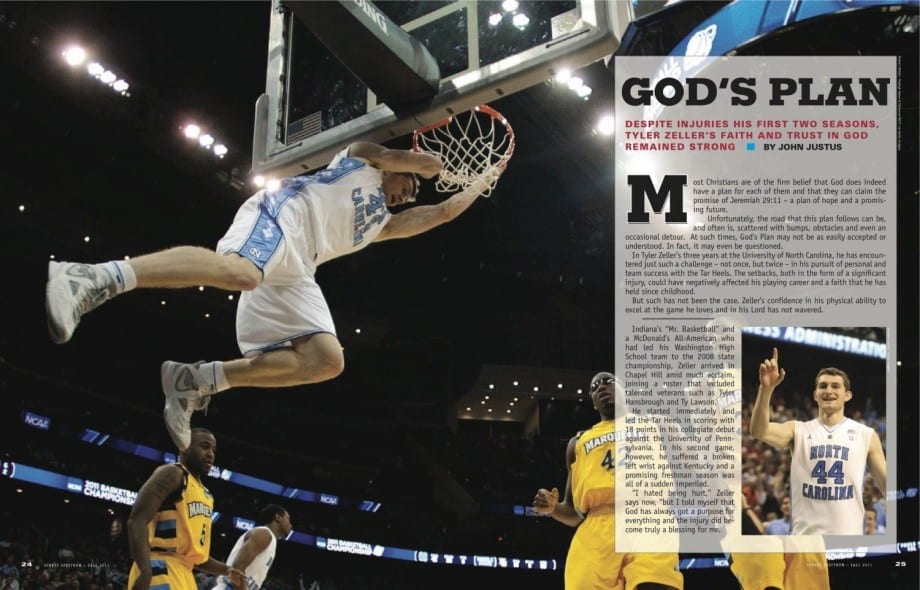 Despite injuries his first two seasons, Tyler Zeller’s faith and trust in God remained strong, and on Thursday, the middle Zeller was selected 17th overall in the NBA Draft by the Dallas Mavericks. Sports Spectrum’s feature on Tyler was published in the Fall 2011 issue.

Most Christians are of the firm belief that God does indeed have a plan for each of them and that they can claim the promise of Jeremiah 29:11 – a plan of hope and a promising future.

Unfortunately, the road that this plan follows can be, and often is, scattered with bumps, obstacles and even an occasional detour. At such times, God’s Plan may not be as easily accepted or understood. In fact, it may even be questioned.

In Tyler Zeller’s three years at the University of North Carolina, he has encountered just such a challenge – not once, but twice – in his pursuit of personal and team success with the Tar Heels. The setbacks, both in the form of a significant injury, could have negatively affected his playing career and a faith that he has held since childhood.

But such has not been the case. Zeller’s confidence in his physical ability to excel at the game he loves and in his Lord has not wavered.

Indiana’s “Mr. Basketball” and a McDonald’s All-American who had led his Washington High School team to the 2008 state championship, Zeller arrived in Chapel Hill amid much acclaim, joining a roster that included talented veterans such as Tyler Hansbrough and Ty Lawson.

He started immediately and led the Tar Heels in scoring with 18 points in his collegiate debut against the University of Pennsylvania. In his second game, however, he suffered a broken left wrist against Kentucky and a promising freshman season was all of a sudden imperiled.

“I hated being hurt,” Zeller says now, “but I told myself that God has always got a purpose for everything and the injury did become truly a blessing for me.

“Two weeks later I was working out with our strength coach and was able to add 15-to-20 pounds of much-needed muscle that allowed me to hold my own in the low post much better. I actually got stronger while I was out.”

There was some question whether or not Zeller, who would have qualified for a medical redshirt season after appearing in only two games, would return that year. But he did and filled a valuable reserve role on a North Carolina team that was destined to win the 2009 national championship.

“I wanted to help (win the NCAA title) and wanted to be a part of that team,” he explains. “Plus, I felt I could gain a lot by coming back. The experience, particularly learning how physical and intense the games are in the NCAA Tournament, was invaluable.”

With that injury-plagued rookie year behind him, and the corps of the national championship team departing, Zeller was primed to assume a more prominent role as a sophomore. Yet after scoring in double figures eight times, including 16 points at Texas and 18 in a home victory against Marshall, he was diagnosed in mid-January with a stress fracture in his right foot.

It probably wasn’t a coincidence that a youthful Tar Heel team would win just two of the next 10 games with Zeller sidelined. 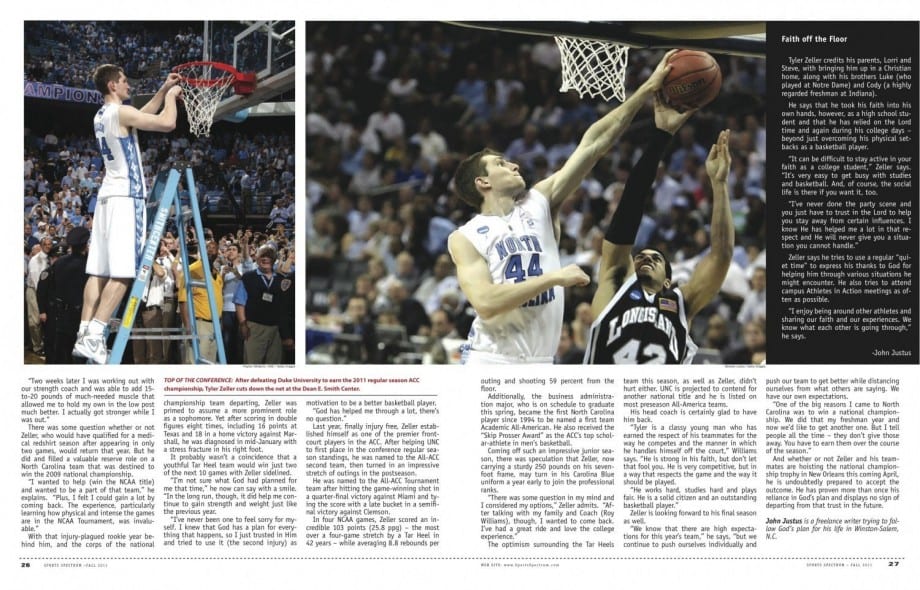 “I’m not sure what God had planned for me that time,” he now can say with a smile. “In the long run, though, it did help me continue to gain strength and weight just like the previous year.

“I’ve never been one to feel sorry for myself. I knew that God has a plan for everything that happens, so I just trusted in Him and tried to use it (the second injury) as motivation to be a better basketball player.

“God has helped me through a lot, there’s no question.”

Last year, finally injury free, Zeller established himself as one of the premier frontcourt players in the ACC. After helping UNC to first place in the conference regular season standings, he was named to the All-ACC second team, then turned in an impressive stretch of outings in the postseason.

In four NCAA games, Zeller scored an incredible 103 points (25.8 ppg) – the most over a four-game stretch by a Tar Heel in 42 years – while averaging 8.8 rebounds per outing and shooting 59 percent from the floor.

Additionally, the business administration major, who is on schedule to graduate this spring, became the first North Carolina player since 1994 to be named a first team Academic All-American. He also received the “Skip Prosser Award” as the ACC’s top scholar-athlete in men’s basketball.

Coming off such an impressive junior season, there was speculation that Zeller, now carrying a sturdy 250 pounds on his seven-foot frame, may turn in his Carolina Blue uniform a year early to join the professional ranks.

“There was some question in my mind and I considered my options,” Zeller admits. “After talking with my family and Coach (Roy Williams), though, I wanted to come back. I’ve had a great ride and love the college experience.”

The optimism surrounding the Tar Heels team this season, as well as Zeller, didn’t hurt either. UNC is projected to contend for another national title and he is listed on most preseason All-America teams.

His head coach is certainly glad to have him back.

“Tyler is a classy young man who has earned the respect of his teammates for the way he competes and the manner in which he handles himself off the court,” Williams says. “He is strong in his faith, but don’t let that fool you. He is very competitive, but in a way that respects the game and the way it should be played.

“He works hard, studies hard and plays fair. He is a solid citizen and an outstanding basketball player.”

Zeller is looking forward to his final season as well.

“We know that there are high expectations for this year’s team,” he says, “but we continue to push ourselves individually and push our team to get better while distancing ourselves from what others are saying. We have our own expectations.

“One of the big reasons I came to North Carolina was to win a national championship. We did that my freshman year and now we’d like to get another one. But I tell people all the time – they don’t give those away. You have to earn them over the course of the season.”
And whether or not Zeller and his teammates are hoisting the national championship trophy in New Orleans this coming April, he is undoubtedly prepared to accept the outcome. He has proven more than once his reliance in God’s plan and displays no sign of departing from that trust in the future.

John Justus is a freelance writer trying to follow God’s plan for his life in Winston-Salem, N.C.