From the Archives -- Betty Cuthbert 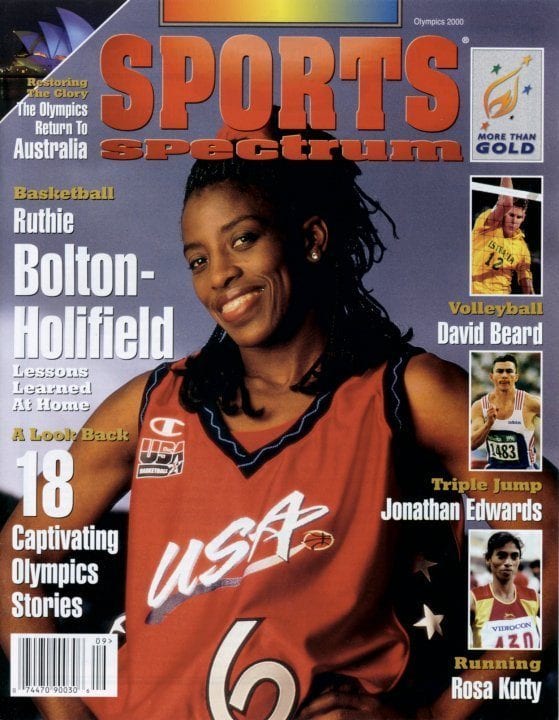 She was born (along with twin sister) in 1938 at Merrylands, Sydney, no more than 10 kilometers from the site of the 2000 Olympic Games.

As a child, she would win all her school races, even beating the boys—and her teacher encouraged her to join an athletics club.

From 13 on, she was winning New South Wales state championships, yet without the fuss and hype that would accompany such success today. In fact, a hallmark of Cuthbert’s career has been her loathing of publicity.

She set her first Australian record at the age of 15 and went on to break 16 world records.

Despite her success, Betty did not give herself a chance of competing at the 1956 Olympics in Melbourne. Eighteen months before the Games, she spent most of her life savings to buy a spectator ticket, believing that her ranking outside the world’s Top 15 for the 100 meters would preclude her from competing.

Then, at the Australian titles just two months before the Games, Cuthbert stunned the nation by breaking Marjorie Jackson’s 200-meter world record, guaranteeing herself Olympic selection.

In one of the greatest Olympics accomplishments ever, she won three gold medals, capturing the 100-meter and the 200-meter races, and bringing home the 4×100-meter relay in a photo finish.

By the 1960 Rome Olympics, more medals looked certain, but a torn hamstring forced Betty to withdraw.

Betty returned to compete in the 1962 Perth Commonwealth Games and again brought Australia from behind to win gold in the 4×100 relay.

Soon, she began to hear a voice she recognized as God, calling her back to full training. For two months she resisted the urging until she found it impossible to sleep.

It was a long haul back to fitness, but Betty gained selection to the 1964 Tokyo Olympics in a new event for women, the 400 meters. She employed her familiar tactic of starting fast, slowing down during the middle of the race, and then sprinting on the home stretch.

Cuthbert won the final and the gold medal, despite losing her heat and semi, defeating English champion Ann Packer by one meter. This put her in a rare class of athletes who have won gold in four different track events.

Packer later commented, “Betty had an inner understanding of herself. She had a stronger belief in herself than I had.”

But what Betty believed in was much more than herself—it was God. Ever since she was 8, she knew that God had given her a gift of running fast, and growing up in a Christian home she held a strong belief in God.

At her fourth and final Olympic victory in Tokyo, she thanked God secretly after crossing the line.

Much later, at the age of 47, she discovered that she needed more. She learned the reality of having a personal relationship with God.

“I received Jesus as my Lord and Savior,” Cuthbert says. “I always believed in God, but (trusting) Jesus was the key to entering into an eternal relationship with God. Jesus said He is the way, the truth, and the life—no one comes to God our Father but through Him.

“Receiving Jesus was the greatest experience of my life…far greater than all my medals. And the other great thing was I didn’t have to work for it. It was a free gift from God.”

Betty now encourages everyone shemeets to be born again. “The same free gift I received can be yours, too.” she says.

In 1969, Betty was diagnosed with multiple sclerosis. Today, the “Golden Girl” of Australian athletics uses a wheelchair to get around and has lost the use of her right hand.

It would be understandable to think that one so blessed with speed would be tortured with frustration at her lack of mobility.

“I have never questioned God or asked, ‘Why me, Lord?’ because I love God so much. I continue to trust Him.”

Note: After this story was written for Sports Spectrum’s 2000 Olympics issue, Betty Cuthbert had a street and also a rose named in her honor. The naming of the rose was because of her work for people with multiple sclerosis and to raise awareness for the disease in Australia. Cuthbert was also inducted into the IAAF Hall of Fame in 2012 as part of its inaugural track and field class.

This story appeared in Sports Spectrum’s 2000 Olympics issue. To order a copy of this issue, please call 866-821-2971 and mention that you saw this offer on our website. The cost is $5.95, plus postage and handling.