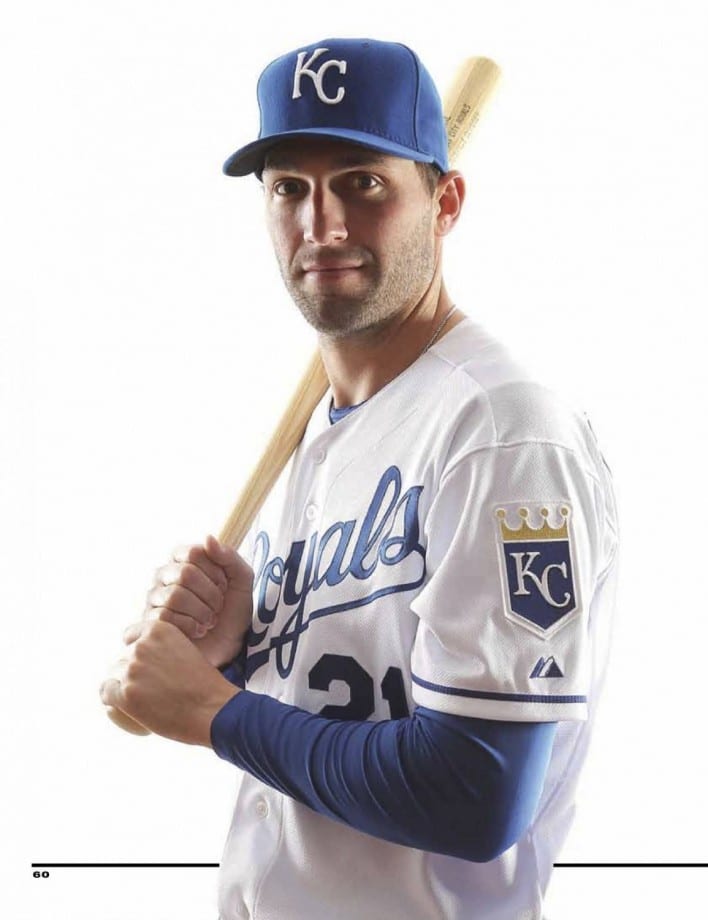 Kansas City Royals right fielder Jeff Francoeur experienced that life might not go as planned, which is why he understands the importance of a love that satisfies.

When Sports Spectrum reached Jeff Francoeur for a scheduled telephone interview, the Kansas City Royals right fielder asked that we call back in a few minutes.

“I’m about to go through the take-out window at Chick-fil-A,” Francoeur explained. The picture of a well-paid Major League Baseball star waiting in line for a $2.99 chicken sandwich is amusing, but completely in character for the seven-year veteran. Francoeur wears celebrity casually and is one of the most approachable ballplayers in the game today.

“Being from Atlanta, I’m a Chick-fil-A nut!” Francoeur enthused when we finally connected. “It’s kind of funny, but when I’m done playing baseball I want to own and operate a Chick-fil-A.”

It will probably be awhile before Francoeur waits on you at his Chick-fil-A restaurant though, as the 27-year-old looks to have a few years left in his career on the diamond. Though he’s had setbacks and low spots the past few seasons, he inked a free agent contract through 2012 with the Royals, and a strong 2011, where he hit .285, had 20 homers, 87 RBIs and 22 stolen bases, suggesting he is back on track in a career that began spectacularly.

Francoeur homered in his first major league game in 2005, finished third in NL Rookie of the Year voting and found himself on the cover of Sports Illustrated with the label “Mr. Natural” during his inaugural season. It was heady stuff for a 21-year-old, made all the more magical in that he was playing for the Atlanta Braves, his hometown team.

“I grew up as the biggest Braves fan,” Francoeur confesses. “And to play for the team I grew up rooting for was awesome. I couldn’t have asked for anything better.”

During the next two years, Francoeur established himself as a force in the Braves lineup, playing every game and batting in more than 100 runs each season. In 2007 his fielding prowess was recognized, as well, as he earned a Gold Glove as one of the three best outfielders in the National League.

Then, just as Francoeur was about to take his place as one of the premier players in baseball, the storyline changed. Francoeur struggled, and his trademark aggressiveness at the plate became a liability as he flailed at pitches outside the strike zone. His productivity suffered, and at one point in 2008 he briefly found himself back in the minor leagues.

But the hardest pill for Francoeur to swallow took place in May of 2009 when he was traded from his beloved Braves to the New York Mets.

Through it all, Francoeur stayed grounded in a firm faith that a wise and loving God was in control, and he stayed focused on Joshua 1:9, a Bible verse written on his batting gloves that he reflects upon regularly: “Have I not commanded you? Be strong and of good courage; do not be afraid, nor be dismayed. For the Lord your God is with you wherever you go.”

“When I was in Double-A ball, I got hit in the face,” Francoeur explains, “and I had six hours of surgery. For a week I was in the hospital and I thought I might never play again. My mom read that verse to me every day, and it reminds me of God’s grace and His mercy that I can continue to play this great game.”

Francoeur’s two seasons in New York were a roller coaster, with a strong 2009 batting average of .311 giving way to a weaker .237 through August of 2010. Then a late-season trade to the Texas Rangers shook up his story once again. Suddenly, frustration turned to exhilaration amidst the excitement of a pennant race and eventually an appearance in the 2010 World Series.

“I have to say the highlight of my career so far was playing in the World Series,” Francoeur says. “As a kid, that’s what you dream of. When you’re in the back yard with your dad and your brother, you’re dreaming about Game 7 of the World Series.”

After fulfilling his childhood World Series fantasy with the Rangers, he quickly transitioned to a new opportunity with the Kansas City Royals. While the Rangers were set with three starting outfielders, the Royals were offering Francoeur an opportunity to play every day. Francoeur packed his now well-worn suitcase and headed to Missouri, along with a clear and solid perspective on how baseball fits into his life.

“Baseball is temporary,” Francoeur says. “All this stuff, putting up numbers and such is temporary. If you invest your life into worldly things, you’re going to be left unhappy. As good as yesterday’s game was—two home runs and you’re on top of the world— three days later you might strike out three times and the game’s over. It’s a roller coaster. But God’s love is everlasting. That’s what I try to tell kids. That can never be taken away from you.

“You better invest your life into those kind of things if you truly want happiness,” Francoeur advises, “because you’re not going to find happiness in baseball or your job or anything else. God is the only One who will never let you down.”