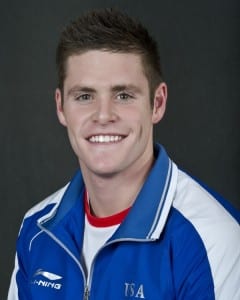 LONDON (BP) — When U.S. diver David Boudia looks at the bronze medal he won July 30 with his teammate Nick McCrory in the men’s synchronized 10-meter platform event, he sees change.

Boudia and McCrory put together six solid dives for a score of 463.47 points to finish third behind the teams from China (gold) and Mexico (silver) and ahead of the hometown team from Great Britain.

Boudia, making his second Olympics appearance, said at this year’s Games he has a “totally different mind frame” from what he did four years ago.

“Going into 2008, I was just excited to be on the team, and it was deer in the headlights,” Boudia said. “I was chasing after things that are temporary.”

But at Purdue University following the Olympics, Boudia’s diving coach Adam Soldati told Boudia about the ultimate fulfillment that comes in a relationship with Jesus Christ. Boudia became a Christian.

“Going into 2012, I knew the one main goal I had was to praise God and to love others while doing it,” he said.

Soldati said Boudia is a different diver this year than what he was in Beijing.

“He was holding onto diving like it was going to satisfy him,” Soldati said of Boudia. “Now as a Christian he realized that’s not going to bring ultimate satisfaction, and that just gives you a peace. We’re in a sport of movement where you need to be relaxed, so if you’re at peace, you’re probably going to perform better.”

Boudia said he has been greatly encouraged by the messages of support he’s received from his home congregation, Faith Church in Lafayette, Ind.

“I get so many messages, whether it’s Facebook or Twitter or text messages, letting me know that they’re praying for me,” Boudia said. “The coolest ones are that they’re not praying for the victories. They’re praying that God’s name would be revealed and lifted on high. Now I have a crazy opportunity. I’m going to be in front of thousands of media people and I get to speak the name of Jesus and praise Him for what He’s done.”