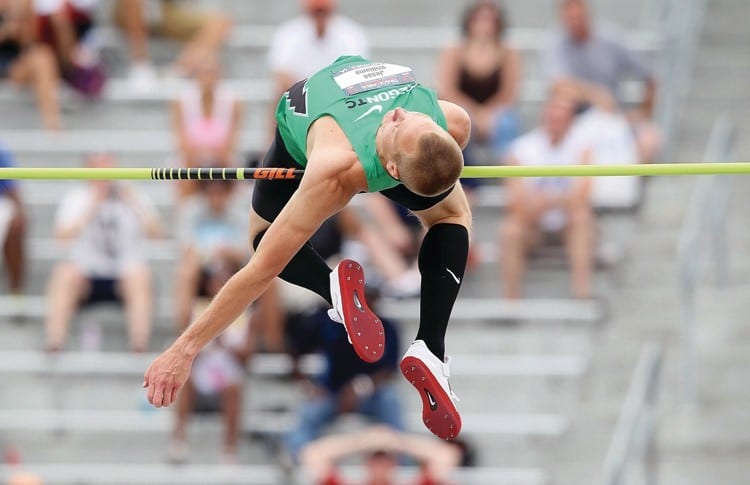 LONDON (BP) — The fact that Jesse Williams is even on the U.S. Olympic team may seem like a fluke to some.

The U.S. high jumper finished fourth in the Olympic trials earlier this summer, and only the top three qualify for the Olympics. But third-place finisher Nick Ross didn’t have the Olympic ‘A’ standard necessary, 7’7″, so Williams squeaked in.

“For me, I feel like this is my opportunity that God has given me to get things done,” Williams said of the Olympics. “But at the same time, I know that God has a plan for me. And I know that whatever happens is God’s plan.”

Williams attributed his poor showing in the Olympic trials to an ankle injury he suffered the week before while playing basketball. Though the ankle was fine while he was jumping, he said the incident affected his mental preparation.

“I’m motivated more than ever to show that that performance is not the typical Jesse Williams jumping,” he said. “I’m motivated to go out there and show everybody that I can do much better.”

Williams certainly has done better in the past. Though he didn’t medal in Beijing in 2008, he won gold at the 2011 World Outdoor Championships. He is considered one of the favorites to win the competition in London.

Jumping was an activity that always came easy for Williams, even as a child in North Carolina.

“No matter what sport I did, I could always out-leap anybody on whatever team it was,” Williams said. “Any game that I played with other kids around the block growing up, I always tried to change it into a jumping game, because I knew I could win.”

He set up obstacles to jump over to challenge himself and see what he could do. Sometimes he was successful. Sometimes he hurt himself with crazy stunts. Inspired by the athletes he saw as his family regularly watched the Olympics in his childhood, Williams knew he wanted to be an Olympian himself.

Jumping wasn’t the only thing that has been with Williams since childhood. His faith in the Lord also blossomed at an early age. He grew up in a home with Christian parents, attended church regularly and listened every night at bedtime as his mother read him a Bible story.

Williams began asking his mother questions, and she told him how he could have eternity with Christ in heaven. He made a profession of faith as a young boy.

“It may be, in a sense — compared to some people’s stories about how they met Christ -– kind of boring, but I find it as a complete blessing to be in that situation,” Williams said.

That trust in the Lord that Williams developed early has helped him throughout his life. As an athlete, especially an Olympian, that trust gives him a peace and a confidence. That’s important for Williams, because the Games come only once every four years and bring with them tremendous pressure to succeed.

“I kind of look at that pressure and see it, but at the same time, I know in the back of my head that it doesn’t matter,” Williams said. “I’m going out there and competing for the Lord. No matter what happens, I’m not going to get flustered. I’m going to go out and have a good time and just represent Him.”

He also learned another lesson along the way that he’s brought with him to London.

“I’m not going to play basketball before,” Williams said. “That’s going to be a big help.”