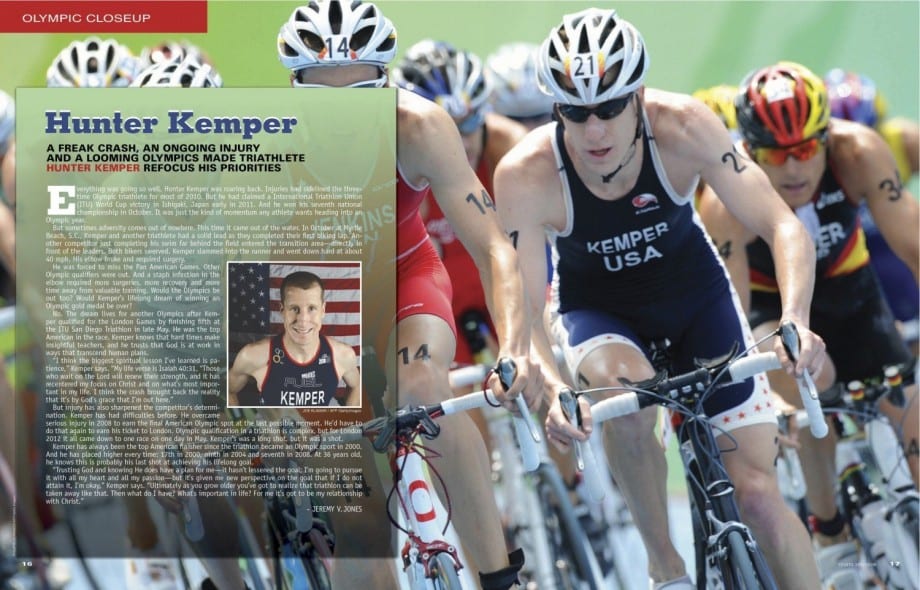 Triathlete Hunter Kemper finished 14th on Tuesday in the London 2012 men’s triathlon, becoming the top American men’s finisher in all four Olympic games since the triathlon made its debut 12 years ago. He covered the 1,500-meter swim, 43-kilometer bike, 10-kilometer run course in 1 hour, 48 minutes, 46 seconds. He was seventh in 2008 in Beijing, ninth in 2004 in Athens and 17th in 2000 in Sydney. Our story on Kemper was published in the Vol. 26, No. 3 issue of  Sports Spectrum magazine.

Everything was going so well. Hunter Kemper was roaring back. Injuries had sidelined the three-time Olympic triathlete for most of 2010. But he had claimed a International Triathlon Union (ITU) World Cup victory in Ishigaki, Japan early in 2011. And he won his seventh national championship in October. It was just the kind of momentum any athlete wants heading into an Olympic year.

But sometimes adversity comes out of nowhere. This time it came out of the water. In October at Myrtle Beach, S.C., Kemper and another triathlete had a solid lead as they completed their first biking lap. Another competitor just completing his swim far behind the field entered the transition area—directly in front of the leaders. Both bikers swerved.

Kemper slammed into the runner and went down hard at about 40 mph. His elbow broke and required surgery.

He was forced to miss the Pan American Games. Other Olympic qualifiers were out. And a staph infection in the elbow required more surgeries, more recovery and more time away from valuable training. Would the Olympics be out too? Would Kemper’s lifelong dream of winning an Olympic gold medal be over?

No. The dream lives for another Olympics after Kemper qualified for the London Games by finishing fifth at the ITU San Diego Triathlon in late May. He was the top American in the race. Kemper knows that hard times make insightful teachers, and he trusts that God is at work in ways that transcend human plans.

“I think the biggest spiritual lesson I’ve learned is patience,” Kemper says. “My life verse is Isaiah 40:31, “Those who wait on the Lord will renew their strength, and it has recentered my focus on Christ and on what’s most important in my life. I think the crash brought back the reality that it’s by God’s grace that I’m out here.”

But injury has also sharpened the competitor’s determination. Kemper has had difficulties before. He overcame serious injury in 2008 to earn the final American Olympic spot at the last possible moment. He’d have to do that again to earn his ticket to London.

Olympic qualification in a triathlon is complex, but for London 2012 it all came down to one race on one day in May. Kemper’s was a long shot, but it was a shot.

Kemper has always been the top American finisher since the triathlon became an Olympic sport in 2000. And he has placed higher every time: 17th in 2000, ninth in 2004 and seventh in 2008. At 36 years old, he knows this is probably his last shot at achieving his lifelong goal.

“Trusting God and knowing He does have a plan for me—it hasn’t lessened the goal; I’m going to pursue it with all my heart and all my passion—but it’s given me new perspective on the goal that if I do not attain it, I’m okay,” Kemper says. “Ultimately as you grow older you’ve got to realize that triathlon can be taken away like that. Then what do I have? What’s important in life? For me it’s got to be my relationship with Christ.”

This story was published in the Vol. 26, No. 3 issue of Sports Spectrum.