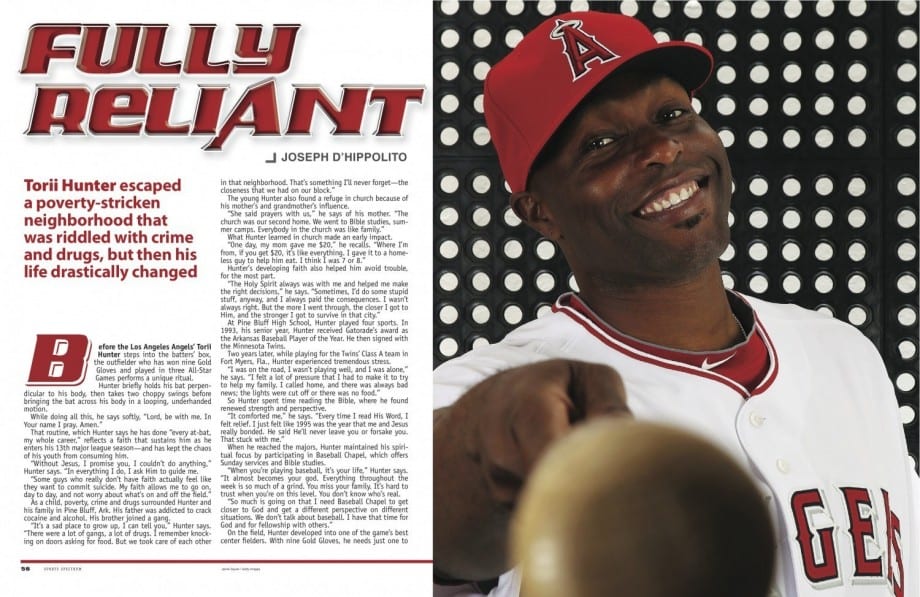 As the 2012 MLB season winds down, Torii Hunter and the Los Angeles Angels of Anaheim have found themselves in a furious race to win one the the two spots in the AL Wild Card. The Angels are currently 81-69 and 4.5 games back from a Wild Card spot with less than 2 weeks to play. We ran Torii’s story in the Spring 2012 issue of Sports Spectrum, and we found out about Torii’s rough childhood, how he’s found refuge in Christ through the mentally and physically demanding baseball schedule, and what he prays before every at-bat…

Before the Los Angeles Angels’ Torii Hunter steps into the batters’ box, the outfielder who has won nine Gold Gloves and played in three All-Star Games performs a unique ritual.

Hunter briefly holds his bat perpendicular to his body, then takes two choppy swings before bringing the bat across his body in a looping, underhanded motion.

While doing all this, he says softly, “Lord, be with me. In Your name I pray. Amen.”

That routine, which Hunter says he has done “every at-bat, my whole career,” reflects a faith that sustains him as he enters his 13th major league season—and has kept the chaos of his youth from consuming him.

“Without Jesus, I promise you, I couldn’t do anything,” Hunter says. “In everything I do, I ask Him to guide me.

“Some guys who really don’t have faith actually feel like they want to commit suicide. My faith allows me to go on, day to day, and not worry about what’s on and off the field.”

As a child, poverty, crime and drugs surrounded Hunter and his family in Pine Bluff, Ark. His father was addicted to crack cocaine and alcohol. His brother joined a gang.

“It’s a sad place to grow up, I can tell you,” Hunter says. “There were a lot of gangs, a lot of drugs. I remember knocking on doors asking for food. But we took care of each other in that neighborhood. That’s something I’ll never forget—the closeness that we had on our block.”

The young Hunter also found a refuge in church because of his mother’s and grandmother’s influence.

“She said prayers with us,” he says of his mother. “The church was our second home. We went to Bible studies, summer camps. Everybody in the church was like family.”

What Hunter learned in church made an early impact.

Hunter’s developing faith also helped him avoid trouble, for the most part.

“The Holy Spirit always was with me and helped me make the right decisions,” he says. “Sometimes, I’d do some stupid stuff, anyway, and I always paid the consequences. I wasn’t always right. But the more I went through, the closer I got to Him, and the stronger I got to survive in that city.”

At Pine Bluff High School, Hunter played four sports. In 1993, his senior year, Hunter received Gatorade’s award as the Arkansas Baseball Player of the Year. He then signed with the Minnesota Twins.

“I was on the road, I wasn’t playing well, and I was alone,” he says. “I felt a lot of pressure that I had to make it to try to help my family. I called home, and there was always bad news; the lights were cut off or there was no food.”

So Hunter spent time reading the Bible, where he found renewed strength and perspective.

“It comforted me,” he says. “Every time I read His Word, I felt relief. I just felt like 1995 was the year that me and Jesus really bonded. He said He’ll never leave you or forsake you. That stuck with me.”

When he reached the majors, Hunter maintained his spiritual focus by participating in Baseball Chapel, which offers Sunday services and Bible studies.

“When you’re playing baseball, it’s your life,” Hunter says. “It almost becomes your god. Everything throughout the week is so much of a grind. You miss your family. It’s hard to trust when you’re on this level. You don’t know who’s real.

“So much is going on that I need Baseball Chapel to get closer to God and get a different perspective on different situations. We don’t talk about baseball. I have that time for God and for fellowship with others.”

On the field, Hunter developed into one of the game’s best center fielders. With nine Gold Gloves, he needs just one to tie Ichiro Suzuki, Ken Griffey Jr. and Al Kaline for the most by any American League outfielder.

At the plate, Hunter has hit at least 20 home runs in 10 of the past 11 seasons. In 2009, he received the Silver Slugger Award as the American League’s best offensive center fielder.

“He loves what he does, he loves to compete, and he expects a lot out of himself,” Angels manager Mike Scioscia says. “He practices at an extraordinary pace. I think that’s why he’s maintained his skill set.”

But Hunter’s biggest contributions have nothing to do with personal performance.

“He’s become an incredible leader and a mentor,” Scioscia says. “Really, his presence is very, very strong every day you walk into that clubhouse. You can sense it in the way he relates with people.”

Peter Bourjos provided Hunter with a major leadership test late in the 2010 season. The Angels recalled Bourjos from the minor leagues to be their center fielder of the future. Hunter would move to right field.

“Center field was my life,” Hunter says. “It was everything, man. I had to sit and pray about it. I spoke to God many nights before I said, ‘yes.’”

Though Hunter would vacate his cherished spot, he provided his replacement with full support.

“He welcomed me with open arms and he’s been great,” Bourjos says. “He was just like a friend, like I’d known him since I was a little kid. Anything I need, he’s always there to help me out.”

When Hunter met outfielder Jeremy Moore in 2009 during a rehabilitation assignment in the minor leagues, the veteran came face to face with a younger version of himself. Like Hunter, Moore grew up amid poverty, crime and drugs. Like Hunter, Moore had a drug-addicted father.

“We just looked at each other and it’s like, ‘Dude, we have the same life. We grew up the same way,’” Hunter says. “I wanted to take him under my wing because I’ve been through what he’s going to go through. I want to show him some of the ways I got out.”

So for two months during that off-season, Moore stayed with Hunter, his wife and four children in their home in Texas. The two players worked out and discussed life.

“It was great,” Moore says. “It’s a big step in my career. I feel like family. I feel like I can go there any time and just fit right in.”

Hunter’s generosity extends beyond his teammates. He has established scholarships for underprivileged children, speaks to them about his past, helps repair urban baseball fields and has worked with such organizations as Athletes in Action, Boys and Girls Clubs and Big Brothers and Big Sisters.

As a result, his fellow major leaguers voted Hunter as the Marvin Miller Man of the Year in 2007; the award honors players who combine excellence in baseball and community service. Two years later, Hunter won the Branch Rickey Award from Denver’s Rotary Club for his work with children.

For Hunter, helping others makes the perfect intersection of his youth with his faith.

“Anytime I receive something, I try to give it back,” he says. “That is a blessing, to be a giver. Some people are just takers. I want to be a giver and not a receiver.

“It’s just about passing the torch. That’s what I want to do.”