Devotion of the Week - Scapegoats 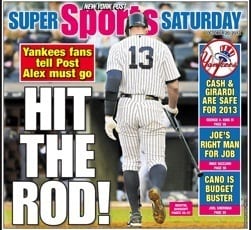 While the World Series is about to get underway, there is one storyline that is still sweeping Major League Baseball – at least in the New York City area. Last week, the New York Yankees were eliminated by the Detroit Tigers in a resounding sweep. The story around the nation wasn’t about the Tigers’ solid pitching, but the lack of offensive firepower throughout the postseason from the Bronx Bombers. The Yankees are set for an interesting offseason that could include many players being moved; but one player seems to be the one that the organization and its fans care about the most.

Third Baseman Alex Rodriguez is in the middle of a record 10-year, $275 million contract in New York, but Yankee fans have grown tired of his lack of postseason production since joining the team in 2004 (the 2009 postseason the lone exception). The tumultuous October for A-Rod began when manager Joe Girardi pinch-hit for him in Game 3 of the ALDS against the Baltimore Orioles for Raul Ibanez. Ibanez hit a game-tying and game-winning home run that night to give the Yankees the win. It continued on as Girardi benched A-Rod in Game 5 and throughout the ALCS against Detroit as Rodriguez was toggled in and out of the lineup. Yes, A-Rod could not hit a high 80’s fastball, but even the young second baseman, All-Star Robinson Cano, was only 3-for-40 in the postseason. Outfielders Nick Swisher and Curtis Granderson were also not living up to their numbers and were also benched in the Detroit series. Yet, all the blame was fully placed on the broad shoulders of the highest paid player in all of sports. 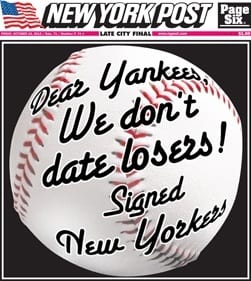 Living in New York, it is easy to realize that you get scrutinized and blamed for every small thing you do – such as Rodriguez throwing baseballs with a message into the stands to two women in Game 2 of the ALCS vs. the Tigers. With Alex, he doesn’t get the grace period that most athletes get because of the lucrative contract given to him by the Steinbrenner brothers and general manager Brian Cashman.

It got me wondering about all the pressure Our Savior went through on the night He was betrayed. In the Garden of Gethsemane, Jesus prayed to His Father that the cup of suffering would somehow pass over Him. He was going to be the proverbial Lamb who would suffer for the sins of the world, even as John the Baptist identified him, saying: “Behold! The Lamb of God who takes away the sin of the world!” (John 1:29)

The Jewish leaders were one of the groups that were not particularly kind to Jesus because of all the crowds He was stirring up in the community. In John’s gospel, he talks about a meeting the Pharisees had after Jesus raised His friend Lazarus from the dead. The main point of the Jewish argument is how we can make sure this Jesus does not incite the Romans to want to crush our people. This is where we first hear of the Jewish high priest, Caiaphas:

“If we let him go on like this, everyone will believe in him, and then the Romans will come and take away both our temple and our nation. Then one of them, named Caiaphas, who was high priest that year, spoke up, ‘You know nothing at all! You do not realize that it is better for you that one man die for the people than that the whole nation perish.’” (John11:48-50)

This passage shows that the Pharisees were looking for a scapegoat for the people. Little did they know that the scapegoat they wanted to provide would end up being the Savior for the whole world! Jesus knew He had to suffer and die in order to save us, especially in the Garden of Gethsemane when He asked His Father “if it is possible, may this cup be taken from me. Yet not as I will, but as you will.” (Matthew 26:39)

One of the more famous prophecies of Jesus being the scapegoat for our sins comes in Isaiah 53. This chapter of the Bible foreshadows the crucifixion of Jesus and talks about the transfer of our sins onto His shoulders. That is a major burden that we would never be able to endure!

“Surely he took up our pain

and bore our suffering,

yet we considered him punished by God,

stricken by him, and afflicted.

But he was pierced for our transgressions,

he was crushed for our iniquities;

the punishment that brought us peace was on him,

Whenever I read this passage, I just stop and say thank you to Jesus for taking on, and bearing, that punishment for me. Without that punishment, we would not be able to have any connection with the Father, nor would be able to receive the gifts of grace and eternal life.

Today, I exhort you to remember that when you feel that a situation is all your fault, although you may be guilty, or bear some measure of responsibility, you must at some point transfer the weight of that burden to the One you believe bore your guilt, the Lord Jesus Christ. This is even the case when we feel that the weight of the world is on our shoulders. We not only have a Savior who took upon Himself the burden of our sin, but He invites us to continuously cast our burdens upon Him!

I pray that you will continue to seek the Lord when you feel weighed down by various burdens and, in the midst of affliction, remember the punishment that Jesus took in your place and mine! Such was a burden none of us could bear.  May such reflection lead you to continually stand in awe of the Lord!

Ricky is a student at St. John’s University majoring in sports management and a freelance writer for Sports Spectrum. He maintains a faith and sports blog called JesusNSports. You can follow Ricky on Twitter @Rickinator555