From the Archives - George Foreman: Fighters No More 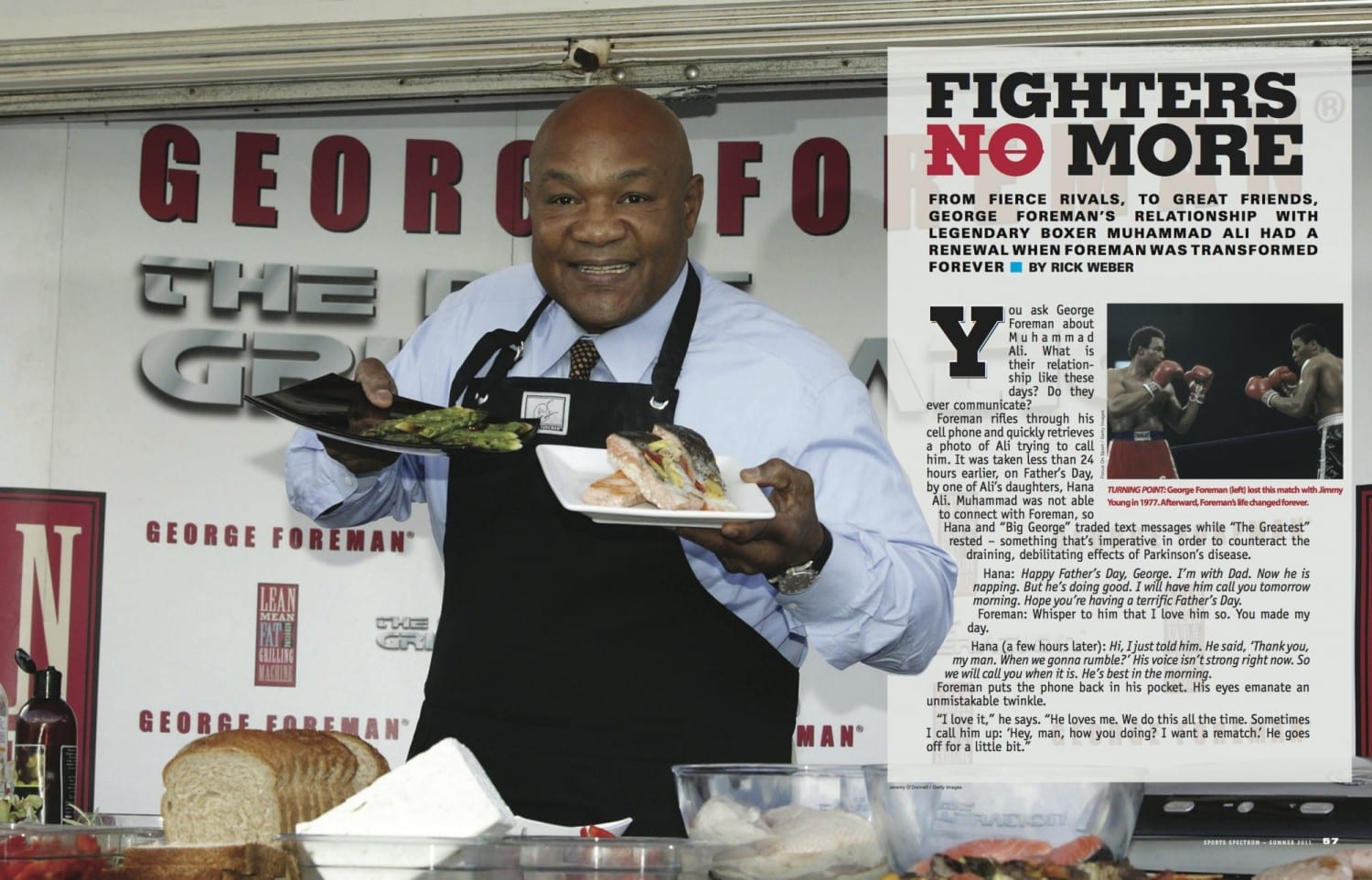 From fierce rivals, to great friends, George Foreman’s relationship with legendary boxer Muhammad Ali had a renewal when Foreman was transformed forever.

You ask George Foreman about Muhammad Ali. What is their relationship like these days? Do they ever communicate?

Foreman rifles through his cell phone and quickly retrieves a photo of Ali trying to call him. It was taken less than 24 hours earlier, on Father’s Day, by one of Ali’s daughters, Hana Ali. Muhammad was not able to connect with Foreman, so Hana and “Big George” traded text messages while “The Greatest” rested – something that’s imperative in order to counteract the draining, debilitating effects of Parkinson’s disease.

Hana: Happy Father’s Day, George. I’m with Dad. Now he is napping. But he’s doing good. I will have him call you tomorrow morning. Hope you’re having a terrific Father’s Day.

Foreman: Whisper to him that I love him so. You made my day.

Hana (a few hours later): Hi, I just told him. He said, ‘Thank you, my man. When we gonna rumble?’ His voice isn’t strong right now. So we will call you when it is. He’s best in the morning.

Foreman puts the phone back in his pocket. His eyes emanate an unmistakable twinkle.

This is a story about the unshakable power of forgiveness. This is a story about how Jesus Christ can soften the hardened heart of an irascible inner-city brawler who had dabbled with the idea of hiring a hitman to take out his enemies – until he realized it wouldn’t be possible because he had too many of them. Too many who had stolen from him. Too many who had impugned his toughness behind his back. Just too many.

For Foreman, life took a radical detour in a steamy locker room at Roberto Clemente Coliseum in San Juan, Puerto Rico, after he had lost a 12-round decision to Jimmy Young on March 17, 1977. With no air conditioning and no window for ventilation, Foreman became violently ill. I’m going to die, he thought.

He could hear a voice: If you believe in God, why are you afraid to die? Foreman recounts, “God, I believe in you – but not enough to die.”

Foreman collapsed onto the floor, and he could feel himself transported to a dark place, a bottomless pit that smelled horrible. Like death. He was filled with every sad thought he had ever had in his life, all jumbled together in an overwhelming cocktail of confusion. It was a vacuum without even a sliver of light, love or happiness.

He screamed, “I don’t care if this is death! I still believe there’s a God!”

Instantly, what seemed like a gigantic hand reached down and pulled him out of the darkness. He awoke to find himself on the training table, surrounded by his entourage, including sobbing masseur Perry Fuller and Foreman’s physician, Dr. Keith West, who was examining him.

“Dr. West, move your hand – the thorns on this head are making me bleed,” he said.

There was blood pouring down his forehead, but he hadn’t been cut in the fight.

“It’s bleeding where they crucified me,” he said. “Jesus Christ is coming alive in me.”

He jumped off the table, kissed everybody, told them he loved them and then bolted for the shower. While he lathered up, they could hear him shouting, “Hallelujah! I’m clean! I’m born again!” He started reciting Bible passages uncontrollably.

“Hold on,” somebody interjected, “because you don’t have any clothes on.” 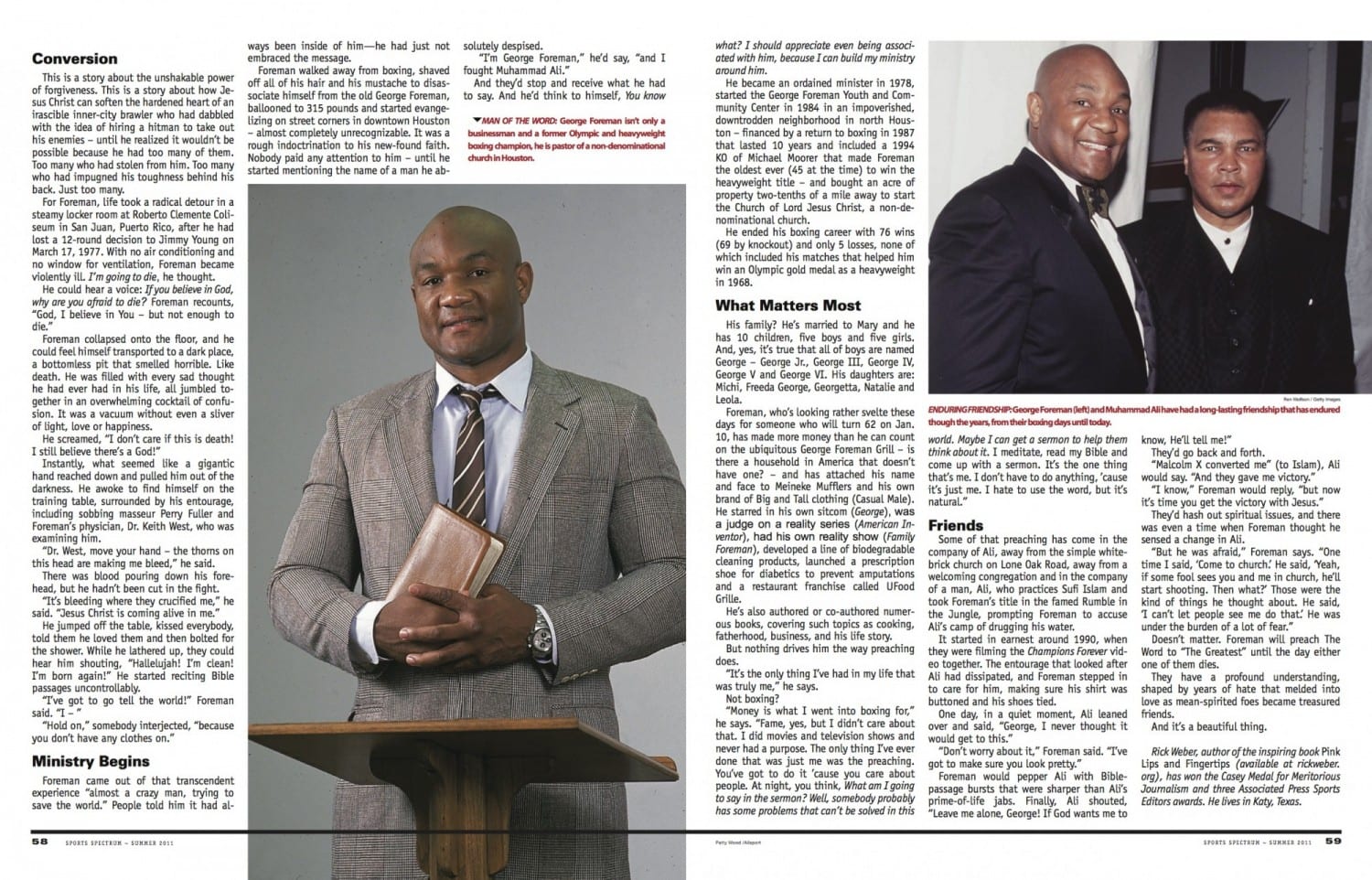 Foreman came out of that transcendent experience “almost a crazy man, trying to save the world.” People told him it had always been inside of him—he had just not embraced the message.

Foreman walked away from boxing, shaved off all of his hair and his mustache to disassociate himself from the old George Foreman, ballooned to 315 pounds and started evangelizing on street corners in downtown Houston – almost completely unrecognizable. It was a rough indoctrination to his new-found faith. Nobody paid any attention to him – until he started mentioning the name of a man he absolutely despised.

And they’d stop and receive what he had to say. And he’d think to himself, You know what? I should appreciate even being associated with him, because I can build my ministry around him.

He became an ordained minister in 1978, started the George Foreman Youth and Community Center in 1984 in an impoverished, downtrodden neighborhood in north Houston – financed by a return to boxing in 1987 that lasted 10 years and included a 1994 KO of Michael Moorer that made Foreman the oldest ever (45 at the time) to win the heavyweight title – and bought an acre of property two-tenths of a mile away to start the Church of Lord Jesus Christ, a non-denominational church.

He ended his boxing career with 76 wins (69 by knockout) and only 5 losses, none of which included his matches that helped him win an Olympic gold medal as a heavyweight in 1968.

His family? He’s married to Mary and he has 10 children, five boys and five girls. And, yes, it’s true that all of boys are named George – George Jr., George III, George IV, George V and George VI. His daughters are: Michi, Freeda George, Georgetta, Natalie and Leola.

Foreman, who’s looking rather svelte these days for someone who will turn 62 on Jan. 10, has made more money than he can count on the ubiquitous George Foreman Grill – is there a household in America that doesn’t have one? – and has attached his name and face to Meineke Mufflers and his own brand of Big and Tall clothing (Casual Male). He starred in his own sitcom (George), was a judge on a reality series (American Inventor), had his own reality show (Family Foreman), developed a line of biodegradable cleaning products, launched a prescription shoe for diabetics to prevent amputations and a restaurant franchise called UFood Grille.

But nothing drives him the way preaching does.

“It’s the only thing I’ve had in my life that was truly me,” he says.

“Money is what I went into boxing for,” he says. “Fame, yes, but I didn’t care about that. I did movies and television shows and never had a purpose. The only thing I’ve ever done that was just me was the preaching. You’ve got to do it ’cause you care about people. At night, you think, What am I going to say in the sermon? Well, somebody probably has some problems that can’t be solved in this world. Maybe I can get a sermon to help them think about it. I meditate, read my Bible and come up with a sermon. It’s the one thing that’s me. I don’t have to do anything, ’cause it’s just me. I hate to use the word, but it’s natural.”

Some of that preaching has come in the company of Ali, away from the simple white-brick church on Lone Oak Road, away from a welcoming congregation and in the company of a man, Ali, who practices Sufi Islam and took Foreman’s title in the famed Rumble in the Jungle, prompting Foreman to accuse Ali’s camp of drugging his water.

It started in earnest around 1990, when they were filming the Champions Forever video together. The entourage that looked after Ali had dissipated, and Foreman stepped in to care for him, making sure his shirt was buttoned and his shoes tied.

One day, in a quiet moment, Ali leaned over and said, “George, I never thought it would get to this.”

“Don’t worry about it,” Foreman said. “I’ve got to make sure you look pretty.”

Foreman would pepper Ali with Bible-passage bursts that were sharper than Ali’s prime-of-life jabs. Finally, Ali shouted, “Leave me alone, George! If God wants me to know, he’ll tell me!”

They’d go back and forth.

“Malcolm X converted me” (to Islam), Ali would say. “And they gave me victory.”

“I know,” Foreman would reply, “but now it’s time you get the victory with Jesus.”

They’d hash out spiritual issues, and there was even a time when Foreman thought he sensed a change in Ali.

“But he was afraid,” Foreman says. “One time I said, ‘Come to church.’ He said, ‘Yeah, if some fool sees you and me in church, he’ll start shooting. Then what?’ Those were the kind of things he thought about. He said, ‘I can’t let people see me do that.’ He was under the burden of a lot of fear.”

Doesn’t matter. Foreman will preach The Word to “The Greatest” until the day either one of them dies.

They have a profound understanding, shaped by years of hate that melded into love as mean-spirited foes became treasured friends.

And it’s a beautiful thing.

This story appeared in the Summer 2011 issue of Sports Spectrum

THE INCREASE: Tuning Out the Noise - Kelvin Beachum