Devotional of the Week -- Ask for directions 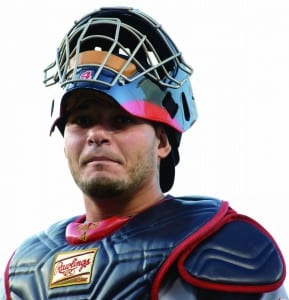 Yadier Molina is perhaps the best defensive catcher in baseball. His prowess at throwing out base-stealers (45 percent) is among the elite in the majors. His 41 pick offs rank first in the National League, “light years” ahead of second place.

He has five consecutive National League Gold Gloves and one Platinum Glove, given to the best among all Gold Glove recipients for that particular season.

Yet many times while watching games, I’ve seen him look over to his manager (formerly Tony LaRussa, now Mike Matheny) and ask what pitch to call for his pitcher. Here’s a guy who is as “baseball smart” as they come, but isn’t too proud to depend on his manager for advice.

David was one of the greatest warriors in the Bible. He defeated Goliath, an undefeated military champion, with just a slingshot. He defeated the Philistines, Amalekites, Jebusites, Moabites, Ammonites, Edomites and Syrians before and during his career as King of Judah and Israel.

Yet 12 times in I and II Samuel, it’s recorded that David “inquired of the Lord”, mostly for combat advice. Here’s a guy who defeated every military enemy he ever faced, but wasn’t too proud to depend on the Lord for guidance. Maybe I should strive to be more dependent on the Lord in my daily life. No request is too big (or too small), and God will hear them. He answered David 12 times out of 12.

Are you dependent on the Lord? He’s reliable and He cares. He’ll hear you when you ask Him, and He’ll answer you in His wisdom.

By Stanley A. Tucker

Stanley A. Tucker is a freelance writer for Sports Spectrum magazine. This devotional is taken from our most recent Training Table, a compilation of sports-related devotionals included in each print magazine. Log in here to access the March 2013/Volume 27, Number 2 Training Table.