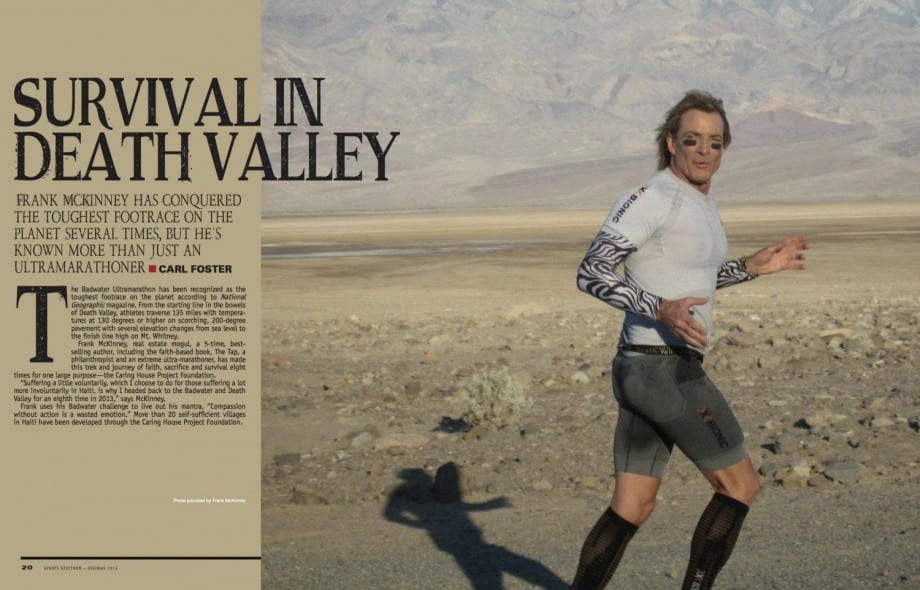 The Badwater Ultramarathon has been recognized as the toughest footrace on the planet according to National Geographic magazine. From the starting line in the bowels of Death Valley, athletes traverse 135 miles with temperatures at 130 degrees or higher on scorching, 200-degree pavement with several elevation changes from sea level to the finish line high on Mt. Whitney.

Frank McKinney, real estate mogul, a 5-time, best-selling author, including the faith-based book, The Tap, a philanthropist and an extreme ultra-marathoner, has made this trek and journey of faith, sacrifice and survival eight times for one large purpose—the Caring House Project Foundation.

“Suffering a little voluntarily, which I choose to do for those suffering a lot more involuntarily in Haiti, is why I headed back to the Badwater and Death Valley for an eighth time in 2013,” says McKinney.

Frank uses his Badwater challenge to live out his mantra, “Compassion without action is a wasted emotion.” More than 20 self-sufficient villages in Haiti have been developed through the Caring House Project Foundation.

There are only 300 athletes in the world who have finished this grueling, madman march through the summer, where temperatures are closing in on the 1913 all-time world record of 134 degrees this year. One hundred runners, by invitation only, are accepted each year, and 2013 featured 20 countries and at least two dozen states represented, with men and women of all ages like veteran Frank McKinney (8-times) and 45-50 rookies. The time limit to finish is now 48 hours; it was 60 in Frank’s rookie year of 2004.

What’s the grand reward? It’s a custom, Badwater belt buckle that Frank describes for sports fans as the equivalent of trophies given by the NFL (Lombardi), Major League Baseball (World Series), NBA (Larry O’Brien), or the NHL (Stanley Cup). “When you walk into a room with runners wearing a Badwater belt buckle, you get the ultimate respect. People even get down on their knees,” laughs Frank.

If you never heard of Badwater and ultramarathons before, Frank never had either before his summer vacation to Death Valley with wife Nilsa in 2004. Being a casual jogger in Delray Beach, Fla., Frank decided to go out for a short, six-mile jaunt in the desert. He would run three miles from their hotel and three miles back to check out the beauty of Death Valley. He barely made it back to the hotel, running out of water halfway out and suffering from heat exhaustion. He had a purple glaze when Nilsa opened the door of his hotel on his return; she knew something wasn’t right.

After an ice bath, they rushed down to a general store to get some electrolytes in Frank’s body and more water. A grizzly, desert-beaten-looking, old prospector at the counter started yelling at Frank to get back out there, because, he thought, Frank was in the Badwater race and was in dead last and wouldn’t finish. Frank was confused because he had never heard of Badwater at that time. As fate would have it, he stumbled into what would become an integral part of his families’ life and mission from God during the next decade. He immediately researched the race, watched a video documentary, “Running in the Sun,” more than 50 times, and became infatuated with the challenge for the human body and human spirit to complete this grueling race. He had to give it a try.

One year to the date of that Death Valley vacation, Frank finished his first Badwater race in 48 hours, 49 minutes, after working with a veteran, Badwater trainer for a year. His wife, Nilsa, also went into research mode, learning all the aspects of being a crew chief while building a team of five to figure out the needs to help Frank get to the finish line.

“Badwater has become a special place for our family, making many lifelong friends and seeing how God has blessed us with the privilege to do this race over and over to benefit those less fortunate with our Caring House Foundation initiative of building self-sufficient villages in Haiti,” adds Nilsa.

Frank, armed with his rock star looks and his willingness to attempt things others only dream about, has raced dirt bikes on a track in his back yard and performed illusions, unveiling his million-dollar, masterpiece houses that he has built and sold. In the real estate world, he is known as a daredevil developer and real estate, rock czar. He has published several best-selling, real estate books and is called on to speak nationwide on how he has applied his Badwater lessons of life. He uses the metaphor of Badwater as challenges to help people overcome fear and failures in their business or personal lives. He shares that everyone has their own Badwater and tells people how to overcome the obstacles that often get in the way.

One might think that surviving one Badwater Ultramarathon would suffice for the “bucket list” of accomplishments, but that wasn’t the reason Frank has returned to the desert year after year. The first event was selfish, he admits, as he wanted the macho bragging rights of being in that select few in the world who finish the world’s toughest race.

“Usually five or so runners actually go to win the race, a small percentage want to improve on their personal best times, but most of us just want to survive,” continues McKinney.

When he missed getting the belt buckle in year one, by just 49 minutes, it didn’t take long for Nilsa and Frank to sit down and start planning a return to Badwater to break the 48-hour mark. God had also “tapped” Frank to open his heart to serve. The Caring House Project Foundation kicked into high gear to start building self-sufficient villages all over Haiti. After the devastating earthquake in Haiti, Frank deployed a team of medics and support personnel, chartered a cargo plane to Haiti and led a team of the first Americans on the scene that pulled people out of the ruins and devastation.

Team McKinney was up for the challenge in 2006, and Frank reduced his finish time by six full hours, to 43, earning him his first Badwater belt buckle.

Just how much do faith, Bible verses and a relationship with Jesus work into the survival of the mountains, the wind, the extreme heat, the various elevations all together in one race?

“If you’re a true Christian, we get tested all the time and sometimes the faith just isn’t where it should be,” Frank says. “I look at Badwater as a microcosm of life and what our faith can go through. What I’ve learned is a three-word mantra, ‘Relentless, Forward, Motion.’ So in life, with our faith, we must always be moving forward with Christ, regardless of setbacks, challenges, doubts, anger and disappointments. We have to relentlessly be moving forward for that eternal prize.”

“While reading the Bible cover to cover, I realized why so much was written about the desert, as there is a spiritual cleansing that takes place in that Death Valley race across the desert. It’s like running on the moon at times, and although stunningly beautiful, I do have so much time to be alone with my thoughts and Christ.

“The perfect verse for Badwater that is prominently displayed on the side of our crew vehicle is Psalm 121:5-6; I rely on these words year after year after coming across them training for my first Badwater in 2004. “The Lord is your guardian, the Lord is your shade, He is beside you at your right hand. The sun will not harm you by day nor the moon by night.” I reach out my right hand many times on that 200-degree blacktop for the Lord to strengthen me and protect me from the sun. The moon by night I relate to the sleep deprivation I encounter over the 48 hours.

Growing Up With Badwater

Frank’s daughter, Laura, who turned 14 years old on July 15 during this year’s Badwater race, has had a chance to grow up watching her dad persevere and traverse across Death Valley the past eight years. It’s been special for her because her birthday always falls during Badwater. Her best memory of the race was a few years back when it actually rained for the first time in the desert during the race.

“It was a fun time being part of the joy and laughter splashing on the streets with my dad,” she says. “It’s also always a special, happy time celebrating with him at the finish line. He’s my hero.”

Badwater 2013 was extra special for Frank, Nilsa and Laura McKinney because his daughter, for the first time, was certified to be an official crew member for the 48-hour endurance run. Crew chief and wife, Nilsa, takes charge every step of the way as she always has to make sure Frank crosses the finish line one more time.

“His goal is my goal. His happiness is my happiness, and as a wife that’s what I feel marriage is all about,” she says. “Support your spouse in what’s important to him and now that’s also important to me.”

As we anticipated Frank returning to Badwater to attempt to do the “undone” of not finishing in 2012, God had another plan, and the desert’s heat literally took the feet out from under him at mile 91.

Frank posted to his fans and followers on his website from Death Valley, “I have some heartbreaking news regarding my Death Valley Badwater 135-mile Ultramarathon. I developed severe blisters covering the bottom of both feet and all ten toes beginning at mile 35. After having my feet tended to by Denise Jones the ‘Blister Queen,’ by mile 91 I was only able to move forward downhill at 2 mph. Each passing hour I was slowing more. It became clear that I would not make the 48-hour cutoff, and I made the agonizing decision to drop out just after mile 91. I want to thank all of you for your support and well wishes. Today was a very tough day, but I accept His will…”

Is there another Badwater race in Frank’s and his family’s future?

The final chapter may not be written yet.

Carl Foster is a veteran sportswriter/sportscaster who has interviewed Frank McKinney numerous times for his Good Sports Magazine Radio Show over the past eight years. Carl also traveled to Haiti with Frank’s Caring House Foundation and ran through the streets of Port-au-Prince with Frank visiting several of the 20 self-sufficient villages he’s built. To listen to Carl’s weekly Good Sports Magazine Radio Show, go to www.gracenetradio.com. Fla.