From the Archives -- What Drives David Carr? 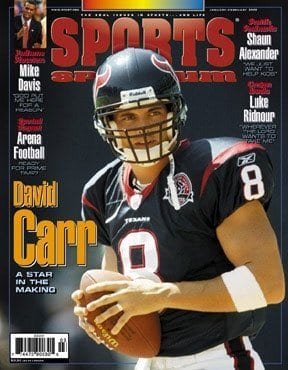 A decade ago, we featured David Carr, the No. 1 draft pick in the 2002 NFL Draft, on the cover of our magazine. This week, we released our August 2013 DigiMag, which features David’s younger brother, Fresno State University quarterback Derek Carr, on the cover. It’s the first time two brothers have graced the cover of Sports Spectrum in its 30-year history. Here is a look back at the January/February 2003 cover story on David Carr…

You look at David Carr and you see a star in the making.

You see a 23-year-old man with chiseled good looks that have put him in a GQ pictorial. You see a blossoming Houston Texans quarterback with a 7-year contract worth $46.2 million.

You don’t see a 21-year-old student living with his wife and newborn son in a cramped two-bedroom apartment filled with thrift-store-quality furniture near the Fresno State University campus.

You don’t see someone who says he graduated with a master’s degree in “surviving with two dependents on $595 a month” and occasionally could afford only Top Ramen for lunch.

You don’t see someone who, after two years of near inactivity as a backup at Fresno State, was asked to redshirt. You don’t see the frustration and despair that churned inside his soul and nearly led him to transfer, a decision that could have taken him down an entirely different path and dramatically altered the course of his life.

Rick Weber is a freelance writer who lives in Houston, Texas. This story was published in the January/February 2003 issue of Sports Spectrum. Print and digital subscribers, log in here to view. Not a subscriber to Sports Spectrum? Subscribe here.