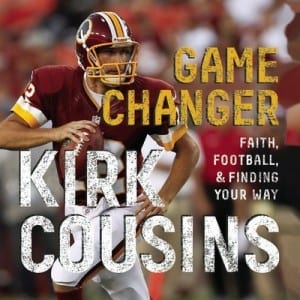 Today on the show, quarterback Kirk Cousins joins Bryce. He was a star at Michigan State before being drafted in 2012 by the Washington Redskins. He has a new book out called “Game Changer – Faith, Football, and Finding Your Way.” Kirk tells Bryce how his mindset is different going into this season, how his faith grew during his rookie year, and what music he listens to before games. Plus, Kirk shares a couple key chapters in his book about friendships and role models. Click here to listen to Bryce’s full interview with Kirk Cousins.

BRYCE JOHNSON: What has your transition been like from Michigan St. to Washington?
KIRK COUSINS: One of the tough things about the job is the fact that you never really have a permanent home. With the off-season being so long you end up staying quite a bit back where home is, back in Michigan, but then obviously for the season you have to be in Washington and end up doing a lot of traveling for different events. So, I feel like I’m living out of a suitcase more often than not. But that’s part of the job and I’m hoping that I can make Washington home in the near future.’

BRYCE JOHNSON: Last year you were heading into your Rookie season, so how has your mindset changed from last summer to this year going into your second season?
KIRK COUSINS: Well, last year I was coming in just trying to get a feel for everything. I didn’t know what to expect, didn’t quite know how things were run, and now I have a much better understanding. I now understand from an offensive perspective what I need to be doing. Also, from off the field I have a better feel for everything. Just the experience factor going into my year two is going to help me quite a bit. That’s why I’m so excited for year two and hopefully take a step forward from year one.

BRYCE JOHNSON: What areas of your life, and most importantly in your faith, did you grow during that first season in the NFL?
KIRK COUSINS: Because of the nature of being a rookie, it’s your first time out there…you’re in a new part of the country…you’re all by yourself…you have a job where you could easily be cut or traded at anytime, it’s not the most stable career. As a result, you end up looking outside of yourself for help. I found myself looking up quite a bit and on my knees praying – just asking God for guidance and direction. I felt like the Holy Spirit was faithful to me all last season and guided me through what was a very tough transition from college to pros.

BRYCE JOHNSON: You wrote a chapter in your new book (Game Changer) with the title, “Friends are a Big Deal.” Why did you feel led to include a chapter about friends?
KIRK COUSINS: I believe that so much of the time when young people start to drift away from where they should be it’s usually because people around them drag them into things. And also on the flip side, I look at myself and some of the success I’ve been able to have I think a large part of it is simply because of the people I hung around with. And whether by choice or by chance, I was able to hang around with some really good people who steered me in the right direction. So I really believe that who you choose to hang with, especially in the middle school and high school years, are going to really impact the direction that your life takes. I want people to be very conscious of the friends they surround themselves with, and where they choose to spend their time and who they choose to spend that time with, because ultimately the Bible makes it very clear that ‘bad company corrupts good morals’ and your friends are going to affect the way you think and the way you act.”

Book: The Ultimate Conversation, Charles Stanley
Charles Stanley’s wisdom and understanding of walking daily with God is so profound and his new book is fantastic.  Prayer is vital to our daily relationship with God, and Charles Stanley provides practical advice and his own experiences on how we can understand the role of prayer even better because we can have an ultimate conversation with the Creator of the universe. I’m always encouraged and challenged after reading one of Charles Stanley’s books, and this one is no different.

Honeymoon spot: Jamaica
I recently got back from my honeymoon in Jamaica, and I had a wonderful time with my new wife. The country is amazing and the people are so nice and easy-going.  They always answer “no problem” and I’ve tried to take that mentality back to my day-to-day life.  I also had a wonderful conversation with a coconut painter who loves Jesus. It’s so much fun to hear how God is working, even while at a resort on the beaches of Jamaica.