Cutch in the Clutch 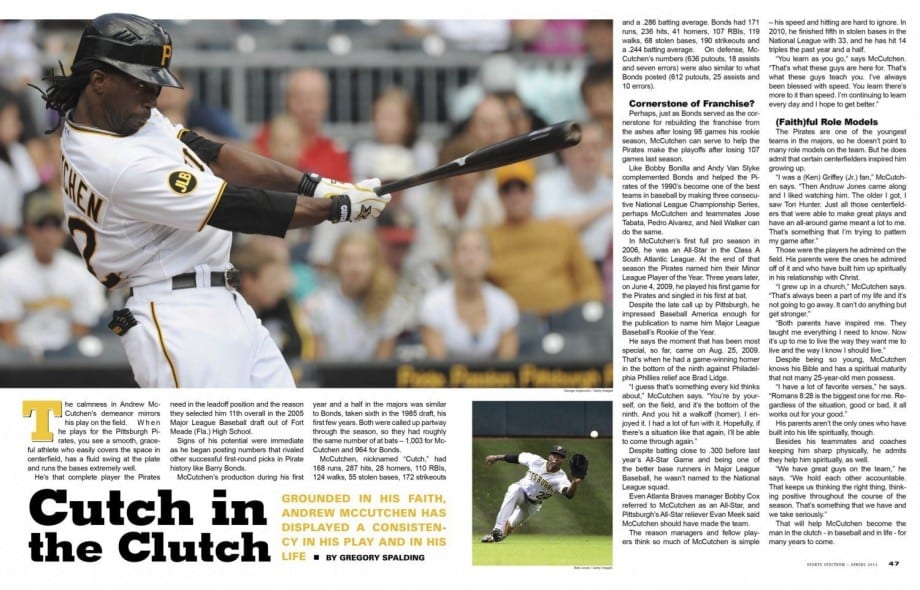 The calmness in Andrew McCutchen’s demeanor mirrors his play on the field. When he plays for the Pittsburgh Pirates, you see a smooth, graceful athlete who easily covers the space in centerfield, has a fluid swing at the plate and runs the bases extremely well. He’s that complete player the Pirates Need in the leadoff position and the reason they selected him 11th overall in the 2005 Major League Baseball draft out of Fort Meade (Fla.) High School.

Signs of his potential were immediate as he began posting numbers that rivaled other successful first-round picks in Pirate history like Barry Bonds. McCutchen’s production during his first Year and a half in the majors was similar to Bonds, taken sixth in the 1985 draft, his first few years. Both were called up partway through the season, so they had roughly the same number of at bats—1,003 for McCutchen and 964 for Bonds.

Perhaps, just as Bonds served as the cornerstone for rebuilding the franchise from the ashes after losing 98 games his rookie season, McCutchen can serve to help the Pirates make the playoffs after losing 107 games last season.

Like Bobby Bonilla and Andy Van Slyke complemented Bonds and helped the Pirates of the 1990’s become one of the best teams in baseball by making three consecutive National League Championship Series, perhaps McCutchen and teammates Jose Tabata, Pedro Alvarez and Neil Walker can do the same.

In McCutchen’s first full pro season in 2006, he was an All-Star in the Class A South Atlantic League. At the end of that season the Pirates named him their Minor League Player of the Year. Three years later, on June 4, 2009, he played his first game for the Pirates and singled in his first at bat.

Despite the late call up by Pittsburgh, he impressed Baseball America enough for the publication to name him Major League Baseball’s Rookie of the Year. He says the moment that has been most special, so far, came on Aug. 25, 2009.

That’s when he had a game-winning homer in the bottom of the ninth against Philadelphia Phillies relief ace Brad Lidge.

“I guess that’s something every kid thinks about,” McCutchen says. “You’re by yourself, on the field, and it’s the bottom of the ninth. And you hit a walkoff (homer). I enjoyed it. I had a lot of fun with it. Hopefully, if there’s a situation like that again, I’ll be able to come through again.”

Despite batting close to .300 before last year’s All-Star Game and being one of the better base runners in Major League Baseball, he wasn’t named to the National League squad.

Even Atlanta Braves manager Bobby Cox referred to McCutchen as an All-Star, and Pittsburgh’s All-Star reliever Evan Meek said McCutchen should have made the team.

The reason managers and fellow players think so much of McCutchen is simple—his speed and hitting are hard to ignore. In 2010, he finished fifth in stolen bases in the National League with 33, and he has hit 14 triples the past year and a half.

The Pirates are one of the youngest teams in the majors, so he doesn’t point to many role models on the team. But he does admit that certain centerfielders inspired him growing up.

“I was a (Ken) Griffey (Jr.) Fan,” McCutchen says. “Then Andruw Jones came along and I liked watching him. The older I got, I saw Tori Hunter. Just all those centerfielders that were able to make great plays and have an all-around game meant a lot to me. That’s something that I’m trying to pattern my game after.”

Those were the players he admired on the field. His parents were the ones he admired off of it and who have built him up spiritually in his relationship with Christ.

“I grew up in a church,” McCutchen says. “That’s always been a part of my life and it’s not going to go away. It can’t do anything but get stronger.”

Both parents have inspired me. They taught me everything I need to know. Now it’s up to me to live the way they want me to live and the way I know I should live.”

Despite being so young, McCutchen knows his Bible and has a spiritual maturity that not many 25-year-old men possess.

“I have a lot of favorite verses,” he says. “Romans 8:28 is the biggest one for me. Regardless of the situation, good or bad, it all works out for your good.”

His parents aren’t the only ones who have built into his life spiritually, though.

Besides his teammates and coaches keeping him sharp physically, he admits they help him spiritually, as well.

“We have great guys on the team,” he says. “We hold each other accountable. That keeps us thinking the right thing, thinking positive throughout the course of the season. That’s something that we have and we take seriously.”

That will help McCutchen become the man in the clutch—in baseball and in life—for many years to come.

This story was published in the Spring 2011 issue of Sports Spectrum magazine.