Another Angle -- Weekend in Virginia 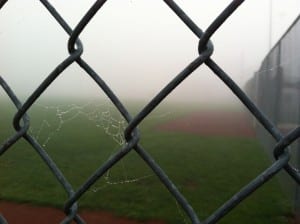 As I write this, I see the Blue Ridge Mountains surrounding the softball diamonds at the Botetourt Sports Complex in Roanoke, Va.

I come here every Labor Day weekend for the Interstate Church of God Softball Tournament. I don’t come to play softball. I come to write. I come to gather stories. I come to Roanoke to believe.

I look out at the mountains, and I’m reminded of the storm a year ago that fell over the Blue Ridge like an avalanche, how I stood in the rain for a bit, not wanting to move, soaked, watching the lightning, mesmerized as if it were a fireworks show. I look at them now, over at the spot where the storm conquered them a year before; now the sun is beaming over them, the sky so clear it’s boring.

I’m a different person this year, I say to myself, as I replay the last year in my mind, a year that can only be described as a storm, one of heartbreak and loss, rejection and emptiness, where two of my grandparents passed and my aunt took her own life.

But the mountains have not changed, I say again to myself, and neither has my God. A storm may blow in this afternoon, but the mountains will not change. They will still be there, their silhouettes stenciled into this open Virginia sky.

This annual weekend in Virginia, this tournament, has become a sort of pilgrimage for me, a hope that waters my belief and helps it grow.

The tournament has been around for more than 30 years, and for one weekend out of the year, this little mountainous town becomes the financial lifeline for a world 4,500 miles away in Paraguay.

A family in the States by the name of the Briscoes started the tournament to raise money for another family, the Kurrles, who are missionaries in Paraguay. Each year, 40-plus teams travel from the South and Midwest, as if it’s the March Madness of church softball. Twenty-eight thousand dollars was raised this year. Softball, in essence, is the lifeline to the mission. It’s the finest marriage between faith and sports I’ve seen.

And it’s the players and coaches who make the tournament particularly special. As I write this, they keep visiting me in the press box and sharing their stories with me. They are broken, beautiful stories, which we all have if we don’t mask them with our pride. Many of them have walked away from their alcoholism at this tournament…or admitted to their failing marriages…or rededicated their lives to Christ. Transparency and vulnerability flow from Roanoke because the spiritual atmosphere is centered on relationship and fellowship, not a worship band or celebrity pastor.

Sometimes I look out at the fields, and it’s as if I’m looking out at a gigantic banquet table, a feast overflowing with love and relationships, alcoholics and drug addicts, all the sinners washed in the blood, born again as saints. The stories bring the softball diamonds in Roanoke to life.

The stories help me believe.

The unchanging mountains help me believe.

Before I started writing all of this, about the mountains and all, there was an early-morning fog clouding every field, as if the fog were still in its slumber, deaf to its alarm. God is in the mountains, I thought to myself. But I no longer think He’s in the fog.

I looked out at the fog, and I realized it was this same veil of vapor that ripped Paraguayan missionary Norberto Kurrle’s heart out a year ago. One April morning in 2012, Norberto and his family were driving on a dark, lonely road in Paraguay, going in and out of a thick fog, when a truck emerged from the blanketing haze, a collision that triggered the loneliest hours of his life.

His wife, Julie, died on impact in the passenger’s seat. His only son, Timmy, I’m told, died in his arms. Norberto and his newly adopted daughter, Anahi, were the only ones who survived. For hours, not a single car drove by.

Not long ago, I may have found the fog beautiful, but now when I see fog, I think of Norberto and Anahi, and I have a deep, longing desire to hug Norberto, and just bury my nose in his neck, my tears drenching his skin, as if the one most affected by the tragedy is the only one who can possibly give me any sort of comfort.

Funny thing is, I’ve never met Norberto. And yet, I’m not sure if I’ve ever known of someone to have such a profound impact on my life who I have not even met, his words in one of his recent blog posts tattooed on the very fabric of my soul: “I am encouraged by all of the good memories I have of you,” Norberto writes of his wife, Julie. “They are a source of inspiration to believe in life and in the love of God.”

The love of God? I hear the Enemy in my ear, his question cocooned in fear and doubt seeded in hell to strangle my hope.

The love of God, I hear Norberto confirm.

And I believe again. I come to Roanoke to believe.

I think about the mountains and the fog, about all these people in Roanoke, the Briscoes in the States and the Kurrles in Paraguay, and I feel as if life may be a continual journey of believing more and more, of stenciling mountains in my mind, even in the crisis of a storm, of forever experiencing the love of God.

And I hear Norberto, somehow, affirm: The love of God.

This column appeared in the September 2013 DigiMag and Vol. 27, No. 4 print issue. Stephen Copeland is a staff writer and columnist at Sports Spectrum magazine. His column tackles sports and faith from another angle, whether it’s humorous, personal or controversial. Follow him on Twitter-@steve_copeland or email him at stephen.copeland@sportsspectrum.com.