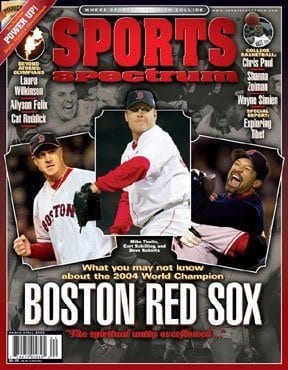 Schilling had just given up four hits over seven innings against the New York Yankees, helping the Red Sox win the game 4-2, forcing Game 7. With the victory, the Red Sox moved one victory away from the most shocking comeback in baseball history.

Schilling ignored the excruciating pain in his right ankle, pain that was caused by a dislocation of the tendons around the outside of his ankle and the stitches inserted to stabilize them. When Albert asked Schilling how he was able to persevere, the reporter was surprised with Schilling’s response…

Read the remainder of our story from our March/April 2005 issue here.