Basketball Featured From The Archives

From the Archives -- Starting Over 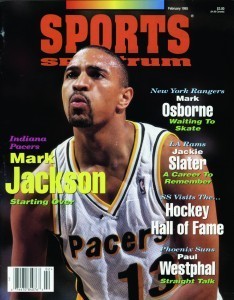 Below are segments of Sports Spectrum’s interview with Mark Jackson from our February 1995 issue.

SS: How have you changed since your college days at St. John’s? Has being an NBA star affected you?
Jackson: No, I think the things that have changed me are being married, having two children, and most important, becoming a Christian. That changed my life more than anything else. That changed my perspective, changed my attitude, changed my whole outlook, and that really was the greatest thing that happened to me.

SS: After a couple of seasons with the Clippers, you moved on again, this time to the Pacers. How do you keep any stability in your life with all these changes?
Jackson: I keeps stability in my life with God by trusting in Him, knowing that He’s not going to steer me wrong and that things are going to go great as long as I stand firm. Also, I have a wonderful wife an wonderful children. Those are the key things in life. It doesn’t make any difference where I play. Still, I must say that this is a great situation: great organization, great coach and twelve guys committed to winning, and I really welcomed this trade.

SS: What keeps you driving to succeed in the NBA?
Jackson: Perfection. Wanting to be the best. Wanting to continue to prove people wrong. And, most important, wanting to touch lives: Wanting people who sit in the stands or sit watching the TV to say, “There’s something special about that guy. Not his basketball ability, not that he can pass the ball and make people around him better, but there’s a special light shining on him.” And wanting to them to want the same thing and letting them know that the light is Jesus Christ.

SS: You mentioned giving your life to Christ. Was it in college?
Jackson: No, it actually happened in my third year as a pro, when I met my wife, Desiree. She told me about the experience of giving your life to Jesus Christ. Nobody had told me that up to that point. She told me about it on our first date, and I thought: “This lady is really special; she just saved my life!” So I accepted Christ as my Savior… 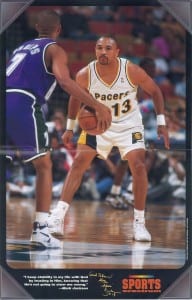 SS: How have you changed? You said that believing in Jesus made a big change in your life–how did it change you?
Jackson: Well, I was never a “bad guy,” but it’s changed me to the point where I try to witness and to minister to people so they don’t have to go 20-something years of their lives without knowing they could become a Christian, that they can give their life to the Lord, and the Lord is waiting. I try to–whether it means mentioning my faith in an interview–allow the Lord to use me as an ambassador, trying to touch someone, trying to bring a soul to Christ.

SS: What NBA story best typifies you and your character?
Jackson: Coming down on a fast break with another teammate alongside of me, when I could just go in and take the shot myself, giving him the ball. As simple as that sounds, that probably best typifies what I’m all about: Unselfish and doing things for others, and sitting back and thanking God for the opportunity.

SS: What’s God been doing in your life recently?
Jackson: Hey, He’s blessing me! He just blessed us with a beautiful baby girl! (Heavyn Nicole was born on December 12, 1994.) Being in the delivery room, watching the precious gift of life being given to my wife and me–you cannot imagine how special that is! And that’s what God continues to do for me.

SS: You’ve got a little boy and a daughter now. If you could pass one thing on to your kids, what would it be?
Jackson: The only thing I’d pass to them is Christ–saving their souls and telling them about Jesus Christ and the wonderful things He’s done and continues to do. I’ve done that with my son, and I’m going to continue to do it with my daughter. That’s the only thing I want to pass on to them. Basketball, and everything else, when it comes down to it, doesn’t make a difference.

This Q&A appeared in the February 1995 issue of Sports Spectrum.

Hubert Davis takes over as North Carolina basketball coach, aims to be ‘example of Christ’

Culture of ‘Jesus, Others, Yourself’ leads to Baylor winning 1st men’s national championship