From the Archives -- A Comeback in the Long Run 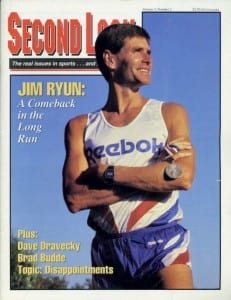 For even the world’s best athletes, the Olympics represent the chance of a lifetime. Years of sacrifice and training culminate in fleeting minutes, perhaps only seconds, of effort. And then…only one winner stands atop the award platform.

Going for the gold is one thing. Getting it is another. Just ask Jim Ryun.

Though not one, not two, but three Olympiads, he chased the gold. But every time he ran, its glitter remained just beyond his grasp.

Tokyo, 1964. A boy of 17, Jim had run competitively for the first time less than two years earlier. A cold hampers his efforts, and he fails to make the finals of the 1,500-meter race.

Mexico City, 1968. In spite of a series of minor injuries and even a bout with mononucleosis, Ryun is the favorite for the gold. He brings home the silver.

Munich, 1972. Again the favorite. In his first qualifying heat, Ryun tangles with another runner 500 meters from the finish. Tapes show clearly that he was bumped by the other runner. But his appeal is denied. To run and lose is tough…

Click here to read the remainder of Jim Ryun’s story in the Vol. 3, No. 2 (1989) issue of Sports Spectrum, which was then called Second Look.