Devotional of the Week -- Getting Up When You Fall 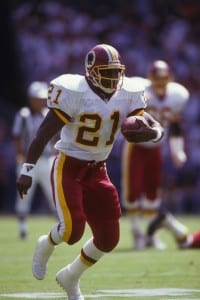 “Even if good people fall seven times, they will get back up. But when trouble strikes the wicked, that’s the end of them.” Proverbs 24:16

A year after John Elway drove the Denver Broncos to victory in the AFC Championship Game against the Cleveland Browns, the two teams met again to see who would go to the Super Bowl.

Late in the game, with a little more than 1 minute left, it appeared that Cleveland running back Earnest Byner would tie the game, but the ball was stripped from his hands at the 2-yard line, Denver recovered, and the Broncos held on for the victory in one of the greatest games in AFC/NFC Championship history.

Unfortunately, Browns fans remember Byner for what they called “The Fumble” instead of his solid years as a running back for Cleveland.

Byner, though, didn’t wallow in his misery. After being released by the Browns the following season, he spent five years with the Washington Redskins, won two Super Bowls and was named one of the franchise’s 70 Greatest Redskins. He played for the Browns again in 1994-95 and then, ironically, ended his career in 1996-97 for the Baltimore Ravens (the team that was moved from Cleveland by owner Art Modell in 1996).

Byner didn’t let failure keep him down. His career is a great reminder of that, and that when we fall, we should get back up.