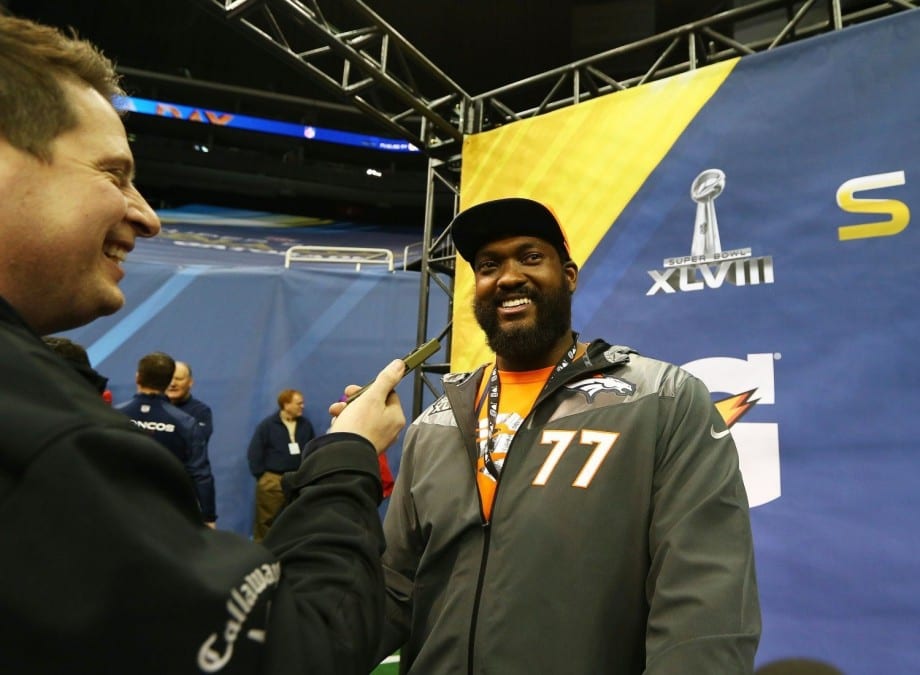 Protecting Peyton Manning, one of the greatest NFL quarterbacks in history, doesn’t come without bumps in the road.

For Winston Justice, those bumps have been numerous.

His storybook ascension started in high school, when Winston Justice started making his own decisions.

Raised a Jehovah’s Witness, Justice defied his denomination’s edict to avoid organized athletics because it would expose children to “unwholesome associations” and started playing football when he was 16. Once he realized his potential, Justice recognized his means to an end: an athletic scholarship would allow him to get an education his family otherwise couldn’t afford and raise his profile among peers.

He starred at Long Beach Poly High, a perennial national powerhouse, and Justice earned a scholarship to the University of Southern Cal, where he started on a national championship team and blocked for three Heisman Trophy winners (quarterbacks Carson Palmer and Matt Leinart and running back Reggie Bush). Selected in the second round of the 2006 NFL Draft, Justice started every game for the Philadelphia Eagles at right tackle for several seasons for the Eagles.

An ultimate winner by the world’s standards.

So why did he feel like such a loser?

“You have an all-star football player and everything seemed good,” Justice says of his collegiate career. “But I was really depressed.”

Justice didn’t know why, and he desperately searched for his identity, yet only in what he described as “the wrong things.”

“In women,” Justice says. “In football. In trying to be cool. In drinking.

“It was like drinking water that didn’t quench my thirst,” he says, noting he would visit with counselors.

But through the grace of God, and the love of a Christian woman, Justice has committed himself to Christ, and he’s now leading others to the light.

“Teammates who knew him in college, they say, ‘Man, what are you doing?’” says Theodore Winsley, a pastor at Living Faith Christian Center in Pennsauken, N.J. who mentors Justice. “One of the greatest witnessing tools is to win, not just in the game, but in life.” 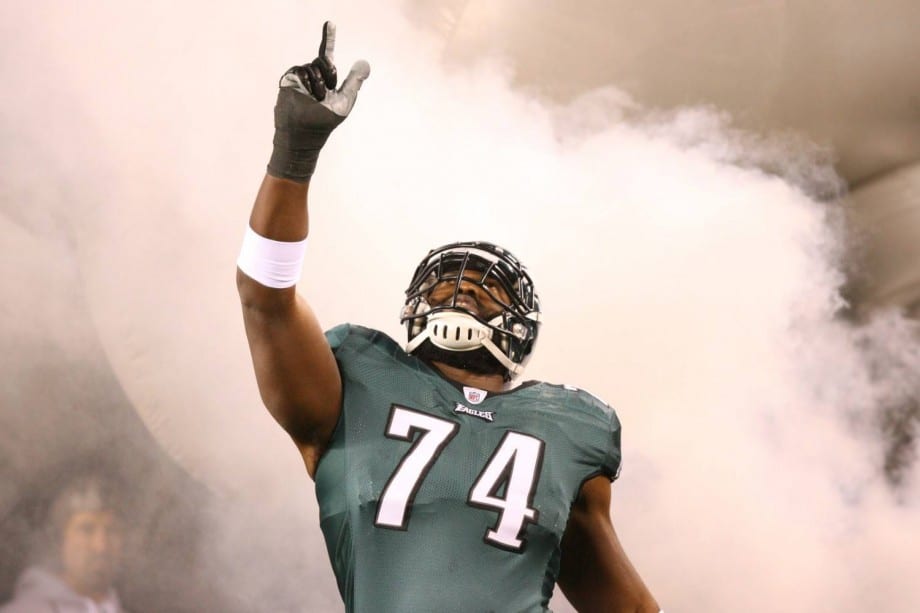 Justice’s parents and grandparents were active Jehovah’s Witnesses, so he regularly attended church.

“I always went there because of them, not because my heart was into it,” he says. “I was never baptized as a Jehovah’s Witness.”

But Justice’s parents didn’t strongly resist when he decided to play basketball and football at 16.

Inside, though, he was conflicted and confused about his faith.

“I was young and frustrated,” he says, “and I didn’t believe in anything.”

At Southern Cal, Justice often found himself not wanting to get out of bed. Counselors provided him anti-depression meds, which didn’t seem to help.

To this day, Justice wonders how much better he could have been if he were more focused and committed.

“I’d drink, and party the whole night, then go into the 6 a.m. workouts really drunk,” Justice recalls. “So how effective can you really be?”

Remarkably, though, Justice was talented enough to start as a true freshman and throughout his college career for the Trojans.

He coasted even into his rookie season, during which he met a special young woman. After dating for a while, though, she left him.

“I was young and selfish,” he says. “I was very into myself, just like a lot of football players are.”

Justice tried to move on, yet he was still pained by her departure. Attempts to not think about her were fruitless.

He pursued her to her hometown in Florida, but she’d changed: she found the Lord.

“She was very serious about it,” Justice recalls. “I was like, ‘Only way I can get her back is to try this Christian thing.’

And I tried it, and Jesus took a hold of my life.”

He’s mature enough now to admit that he tried to be deceptive.

“I figured I would fake it to get her back,” he says. “But my plan didn’t work.”

He started to attend Summit Church in Naples, Fla., where he was profoundly impacted by Christian men. He returned to Philadelphia and connected with Winsley, who has been a chaplain with the Eagles for more than a decade and leads a Bible study for players.

During Justice’s rookie season, he declined invitations from his roommate – receiver Jason Avant – to attend the Bible study. But Justice accepted during his second season.

“When I met him, he was clearly lost,” Winsley says, “but he was very open, and he wanted the truth.”

Winsley, who left a national sales management position at a fashion company to become a pastor, noted the unique challenge of professional athletes.

“Money gives you the opportunity to express yourself,” he says. “So some (athletes) crash and burn quickly. When I met him, he had failed, and he knew he failed, and he just wanted the truth, so he was a sponge.”

Winsley provided Justice with a book on world religions, including the beliefs of Jehovah’s Witnesses.

“He was in a cult,” Winsley says. “Then I showed him the difference between Christianity and Jesus Christ. He walked himself out, by just wanting what was truth.”

Justice says none of this happened overnight.

“It was gradual,” he says. “You hear about one day it all changes.

“But each year, I grow closer to Christ.”

Still, Justice says temptation is always right around the corner. He married that young woman, whose name is Dania, and they have a son (Selah) and a daughter (Calais).

“Some people say it should be easy, but it’s a constant battle,” he says. “I think the enemy is always out to get you. I always try to keep myself in the Word, to keep it fresh in my mind.”

He talks to children as much as possible about setting goals and valuing teamwork.

During the offseason, he also helped rebuild an orphanage through the Mission of Hope in Haiti.

“I’ve been to third world countries before,” Justice says. “But, this one had a disaster. In Uganda, they don’t know how poor they are. It’s just their reality. In Haiti, they know they’re poor.”

One year, Justice raised money to build homes in Haiti.

Winsley is proud of Justice. The Broncos’ 29-year-old offensive tackle who was signed in September after playing with Philadelphia (2006-2011) and Indianapolis (2012), committed himself to Christ during a Bible study session, and he’s hungry to learn more and more. After each meeting, Justice and Winsley would meet privately for at least another 20 minutes, with the player asking the pastor specific questions about the lesson and life.

“He brought a couple of players to the Bible study, because of his witness,” says Winsley of Justice.

Winsley added that Justice understands something that many other athletes do not.

“If (players) don’t prepare for it, they think their life is going to end. That’s why it’s important these young men are grounded by a relationship with God.”

“I work to glorify God,” Justice says. “I really felt that God put that in my heart. I think my goal is to be a great offensive tackle. But, my major goal is to glorify God. I want people to see Christ in me, when I play. Not being fearful, to giving his all on every play.”

Sean Jensen has been a beat writer and columnist who covered the Chicago Bears and Minnesota Vikings for the Chicago Sun-Times and the St. Paul Pioneer Press. He is currently the editor of Thrive Sports.

Top QB prospect Cade Klubnik picks Clemson, thanks parents for helping him be ‘man of Christ’