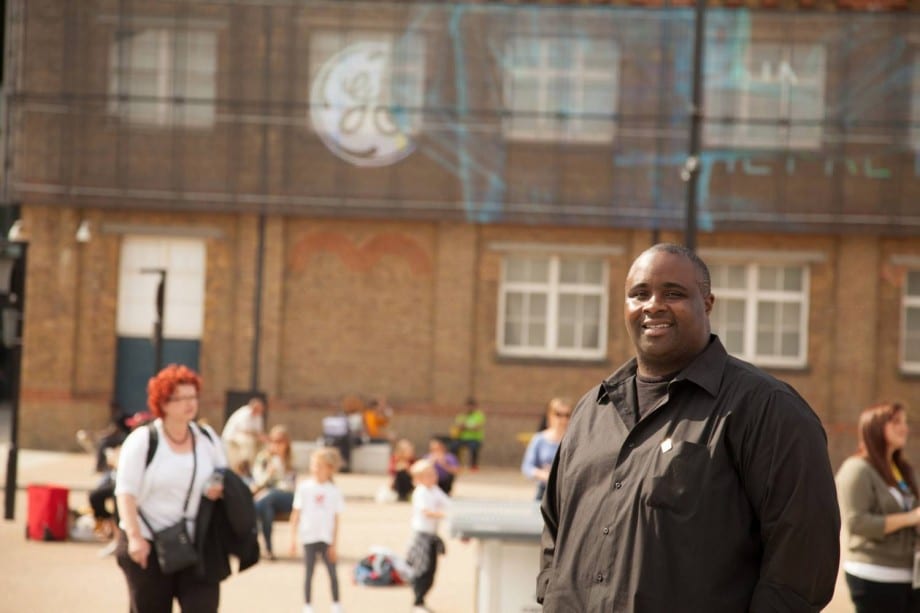 EDITOR’S NOTE: Baptist Press will publish features about Christian athletes in the Olympics, recap results of their competition and cover Baptist initiatives to share the Gospel during the Summer Games and among Londoners’ rich cultural milieu.

LONDON (BP) — Bernard McGraw paused when he saw the man at the pump stacking pennies on the hood of his car.

McGraw had one. He tucked it in the man’s hand, along with a business card for his Creole restaurant. “If you’re hungry, please come, and I’ll feed you because of the love Jesus has for me and for you.'”

“I told him I’ve been where he is — I’m still stacking pennies on my car sometimes,” McGraw said. “But now I have a relationship with Christ that gets me through the hard times.”

It’s a relationship that kept McGraw from committing suicide in the darkest hours of Hurricane Katrina. It’s one that guided him to open a restaurant in San Antonio, and one that’s now brought him to London as a street pastor for the Summer Olympics.

“At the end of the day, I want to reach that one person who can’t go anymore. Because I was there,” he said.

McGraw, his wife Charlene and six sons lived in New Orleans until Hurricane Katrina hit in 2005. Four days after the storm hit, the family waited on the corner of St. Charles and Napoleon avenues for a bus to evacuate them.

“When the bus came, they said, ‘Women and children first.’ I never thought I’d hear anything like that in my life. I let my wife and kids go,” he said.

Their bus headed for the Superdome. The next bus, which McGraw got on, headed to the airport instead.

And McGraw said he was headed for a meeting with the Lord.

“There was no way for me to communicate with my family. I had no idea where they were or what was going to happen, and I began to hear nightmare stories of what was happening in the Superdome. There was no law and order, and people were being raped,” McGraw said. “I had never contemplated suicide before, but I did then. I had no hope, no light and no help. I said, ‘Lord, if you are who you say you are, I’m not worthy, but I need you.'”

And God showed up, he said.

“I was filled with the Holy Spirit. My whole attitude changed,” McGraw said.

A few days later, after a flight to Houston and what he said was a God-ordained phone call, McGraw found his family.

They were in Houston, too.

“They never got to the Superdome. God protected them, and they spent the night in an alleyway and ended up getting picked up by a bus headed to Houston,” McGraw said. “I went down to the Astrodome and started looking for them.”

He found them, and they began to make a new life in Texas. And he found a new life with Christ, he said.

“God laid it on my heart to start a Creole restaurant on the south side of town,” McGraw said. “I’d never cooked like that before. I mean, I cooked, but so did everyone in New Orleans. I didn’t cook any better than my neighbor.”

But God made the way clear, he said, and a providential string of events and people kept Bernard’s Creole Kitchen open for business, he said. Monday paid for Tuesday, Tuesday paid for Wednesday and so on.

God paid the bills, he said. For four and a half years, McGraw fried fish and fed San Antonio’s crack heads, heroin addicts and the hungry.

“They would come to the side door, and I’d say, ‘I’ll feed you, but you have to come in and sit at the table,'” he said. “It was important that they be fed but also that they see and know love.”

McGraw saw the same look — physical and spiritual hunger — in the eyes of a man he met in a fast food restaurant in London this week.

“He asked me for money, and I offered to buy him a meal. He took me up on it and said he would eat with us if we would have him. He’s homeless, and his wife left him,” said McGraw, who is serving as a street pastor in London this week with a team from Baptist University of the Americas in San Antonio.

McGraw asked the man how he was with Jesus.

McGraw said he thought the man would leave after he ate, but he stayed.

“It was like God told me, ‘This is the one you came to help — the one you’ve been praying for,'” he said.

So McGraw told him as much.

“This is your moment — God has carved this out for you,” he said to the man. McGraw and the team helped him find a place to sleep and got him connected with More Than Gold, the ministry umbrella for evangelical Christians during the Olympics.

“We planted seeds, and we have to pray and trust that God is taking the seeds we’re planting and will use them for His glory,” McGraw said.

He’s seen it happen before.

He was doing it himself at his restaurant. He told his pastor at True Vine Baptist Church that he felt God calling him to ministry work.

Then McGraw got an invitation to reopen his restaurant at Baptist University of the Americas in 2010 and run their food program, and suddenly people were asking him about doing global missions, too.

“I thought I’d never go anywhere globally, and if I did, it would be on vacation to Jamaica,” he said with a laugh.

It wasn’t long after that he found himself in Haiti, and then in London. In addition to spending his evenings serving as a street pastor at Kings Cross Station in London, he’s spending his mornings playing with children in a predominantly Muslim community.

The children are waiting for his team when the doors open in the mornings at Bow Baptist Church near Olympic Park.

“It’s my prayer that they will remember us,” McGraw said. “But not just that — I hope that they will wonder, ‘Who were those people? Why did they come here to love us?'”

He prays God will make the seeds take root in years to come. That’s actually his prayer for everyone he meets in London.

U.S. soccer star Julie Ertz perseveres in faith as she leads others to Christ