In the News: Tim Tebow 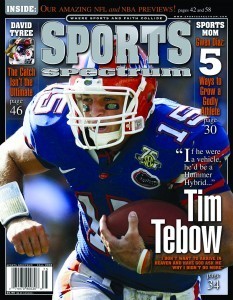 The Broncos are 8-5, on a six-game winning streak and 7-1 since Time Tebow was named the starter. All he does is win.

This post includes Tebow’s testimony that was featured in Sports Spectrum’s Fall 2008 issue, “The 25-Year Anniversary Book” and The Core Media Group’s new book “Wisdom & Sports” along with a number of other links (positive and negative) regarding Tebow and his faith.

Bob Costas dissertation on Tim Tebow – how to explain the unexplainable?, NBC Sports

Run by Tebow, Broncos get harder to explain, Yahoo Sports

In the beginning was God. He created man. He knew every person He would create in advance, knitting each together in the womb (Psalm 139:13). After He created Tim Tebow, there was an effort made to stop him from being born. Whether it was a Satanic attack or just the world system at work, we don’t know, but forces were at work that would have prevented Tim from growing into a powerful agent for Jesus Christ and sharing His saving grace with countless people.

The Tebows were living in the Philippines. The powers of darkness took their best, albeit lame, shot. Complications arose in the pregnancy. Some among the medical staff mentioned abortion. The idea didn’t get past the frontal lobe of Pam or Bob Tebow.

“I think every life is special and significant to God,” Pam said, “so just because he won the Heisman Trophy and has a high platform doesn’t make his life any more valuable.”

There was no lack of intentionality in the Tebows’ parenting. From homeschooling, to choosing Tim’s coaches by moving to the district where they wanted him to play, to pointing him to Danny Wuerffel as a role model, they crafted a champion. Some might call them control freaks. Most would just call them good parents, parents with a plan, parents unwilling to let their children be shaped more by the culture (even the church) than by them.

“My parents have taught me everything,” Tim said frankly. “I’ve learned about being a person of character from them. Without them I would not be who I am. I come from a big family and am the last of five children. I love spending time with them. I can really just be myself and have a great time. They help keep me grounded.”

It was apparent early in his life that this grounded athlete would fly. Tim’s Jacksonville Nease High School coach, Craig Howard, had no trouble spotting the special traits of Tim as an athlete and person. He agrees the family shaped him.

“Great Christian ethics were instilled,” said Howard, who has moved on to Columbia High School in Lake City. “Being the youngest had a great influence on him because he learned from his brothers and sisters. He was recognized and awarded many honors but always gave praise to God and thanked others rather than focusing on himself.

“He is a true servant leader because of his relationship with his Lord and Savior Jesus Christ. He is very grounded in godly principles. A lot of others get big-headed and conceited, but not Tim.”

It doesn’t always work out this way when a parent does the right things. But when it does, it is a beautiful sight, a work of the only one who can make a real difference: God. When Tim Tebow meets Jesus, he will lay down many crowns at His feet, and the Heisman Trophy won’t count. It, or they, will just be tools in the world to advance a greater purpose. “He has the right stuff,” Danny said with a shrug in his voice. “What you see is what you get. It’s pretty simple. It’s beautiful.”

Tim Tebow’s story was published in the Fall 2008 issue of Sports Spectrum. It will also be featured in The Core Media Group’s new book, “Wisdom and Sports” in conjunction with Sports Spectrum. To order the book, click here.