From the Archives: Meb Keflezighi 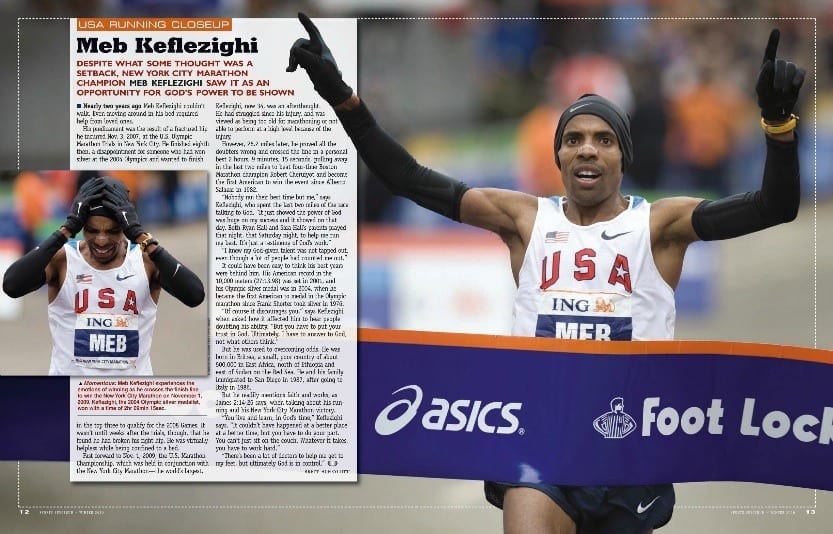 At 36-years-old, Meb Keflezighi won the Olympic marathon trials in Houston last weekend, becoming the oldest man to win the trials. Keflezighi’s story below was featured in the Winter 2010 issue of Sports Spectrum.

Nearly two years ago Meb Keflezighi couldn’t walk. Even moving around in his bed required help from loved ones.

His predicament was the result of a fractured hip he incurred Nov. 3, 2007, at the U.S. Olympic Marathon Trials in New York City. He finished eighth then, a disappointment for someone who had won silver at the 2004 Olympics and wanted to finish in the top three to qualify for the 2008 Games. It wasn’t until weeks after the trials, though, that he found he had broken his right hip. He was virtually helpless while being confined to a bed.

Fast forward to Nov. 1, 2009, the U.S. Marathon Championship, which was held in conjunction with the New York City Marathon – the world’s largest. Keflezighi, now 34, was an afterthought. He had struggled since his injury, and was viewed as being too old for marathoning or not able to perform at a high level because of the injury.

However, 26.2 miles later, he proved all the doubters wrong and crossed the line in a personal best 2 hours, 9 minutes, 15 seconds, pulling away in the last two miles to beat four-time Boston Marathon champion Robert Cheruiyot and become the first American to win the event since Alberto Salazar in 1982.

“Nobody ran their best time but me,” says Keflezighi, who spent the last two miles of the race talking to God. “It just showed the power of God was huge on my success and it showed on that day. Both Ryan Hall and Sara Hall’s parents prayed that night, that Saturday night, to help me run my best. It’s just a testimony of God’s work.”

“I knew my God-given talent was not tapped out, even though a lot of people had counted me out.”

It could have been easy to think his best years were behind him. His American record in the 10,000 meters (27:13.98) was set in 2001, and his Olympic silver medal was in 2004, when he became the first American to medal in the Olympic marathon since Frank Shorter took silver in 1976.

“Of course it discourages you,” says Keflezighi when asked how it affected him to hear people doubting his ability. “But you have to put your trust in God. Ultimately, I have to answer to God, not what others think.”

But he was used to overcoming odds. He was born in Eritrea, a small, poor country of about 500,000 in East Africa, north of Ethiopia and east of Sudan on the Red Sea. He and his family immigrated to San Diego in 1987, after going to Italy in 1986.

But he readily mentions faith and works, as James 2:14-26 says, when talking about his running and his New York City Marathon victory.

“You live and learn, in God’s time,” Keflezighi says. “It couldn’t have happened at a better place at a better time, but you have to do your part. You can’t just sit on the couch. Whatever it takes, you have to work hard.”

“There’s been a lot of doctor’s to help me get to my feet, but ultimately God is in control.”