SS at the Super Bowl: Blog Entry No. 1 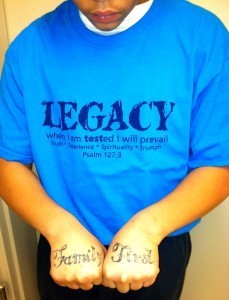 I was sitting at the Marion County Juvenile Detention Center listening to NFL alum Freddie Scott speak in Indianapolis, Ind., when I noticed one of the kids to the left of me. There were 100 kids and 35 parents gathered in the Detention Center’s gymnasium that day, but this kid in particular caught my eye.

I found the whole situation both symbolic and moving. I didn’t know this kid’s story. Not sure why he had the tattoos. We talked to him afterwards and he shyly said, “Because I love my mom.” But that’s all we got.

Ninety-two percent of the kids that walk through the revolving door of the Marion County Juvenile Detention Center don’t have fathers, according to the founder of High Impact Ministries Ken Turner.

Ken said that he regularly walks into the 16-person units at the Detention Center, and asks out of curiosity, “How many of you grew up without a father figure in your home?” Usually 13 or 14 raise their hands. Last time, all 16 raised their hands.

But perhaps that’s where coaches, mentors, and volunteers enter the arena. According to Ken, when volunteer coordinator Tonya Hill first started her job in 2006, all she had were 40 volunteers. In 2008, when Ken started volunteering, they had 100. Now they have 700 regular volunteers, most of which are Christians.

When I heard that stat, I couldn’t help but think to myself, “This is what the church is supposed to be like.” 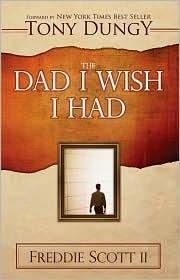 The problems are still there, no doubt. That’s why Freddie Scott wrote a book called “The Dad I Wish I Had” which he talks about in a video (that will be posted tonight or tomorrow). That’s why Ken, Freddie, former Tennessee Volunteers star Inky Johnson, and All Pro Dad’s Darrin Gray regularly show up to speak and minister to the kids. And that’s why Tonya will keep building her volunteer core, which has increased…ummmm…let me do some math here…1,650 percent in a six-year span.

The experience reminded me of James 1:27: “Religion that God our Father accepts as pure and faultless is this: to look after orphans and widows in their distress and to keep oneself from being polluted by the world.”

True faith is speaking up for those who can’t speak for themselves—to care for the least of these.