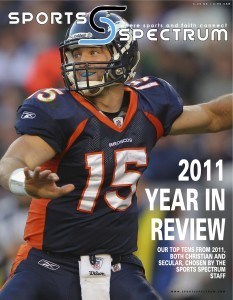 Former Colts QB Peyton Manning has decided to sign with the Denver Broncos, picking the other horse-related nickname in the NFL, but while everyone should be talking about Manning, they are talking about Tim Tebow.

On Twitter, ESPN First Take personality, Skip Bayless, has started the #FreeTebow hashtag, and everyone is wondering where Tim Tebow will wind up. The Broncos reportedly intend on trading him.

Steve Silva from Boston.com writes about Tebow’s potential with the Patriots, which would reunite him with the coach that drafted him, Josh McDaniels, now the offensive coordinator with New England.

Les Carpenter from Yahoo Sports writes that while Tebow may be gone from Denver, he’s a much more polished quarterback since his rookie season, and “he’ll be heard from again.”

Tom Crean has the Hoosiers back in the Sweet Sixteen

Indiana beat VCU Saturday to advance to the Sweet 16, where they will face Kentucky. This will be a rematch of a December matchup, where Indiana beat Kentucky with a buzzer-beater three from Christian Watford.

When asked about the significance of getting IU back to the Sweet 16 after many years of struggling, head coach Tom Crean had this to say:

“Oh, absolutely. There’s no question about it. And as I said to them, again, you know, the way God has brought us all together and touched everybody’s life, everybody is better for what they’ve had to deal with. The seniors… To have them have this happen for them because of the way they’ve earned it, the way they’ve continued to get better. And I know coaches can it can sound really corny when you talk about believing in one another, but I sit and look at these guys, and I’m looking across at them in that huddle and it’s a great feeling. It’s hard to describe… Did we have days where we wondered if we would get to this point? I would look back at this and say that there were a lot of disappointments, but nobody in our program that’s with us to this point ever got discouraged… All college basketball teams work really hard, but these guys have had to come from a long way, a long way, and I’m proud of them.” (iuhoosiers.com)

Browns need to say no to Tim Tebow (ESPN)