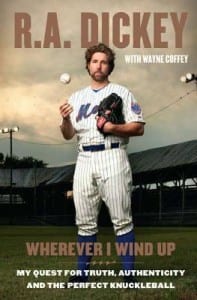 New York Mets knuckleballer R.A. Dickey has released his memoir called, “Wherever I Wind Up: My Quest for Truth, Authenticity and the Perfect Knuckleball.” The book is a very open and honest look at Dickey’s life as he tells about his struggles growing up in a broken home, sexual abuse, adultery, and even suicide.

“I have spent so much of my life running and hiding, and I wasn’t going to continue doing that in the book,” Dickey told the New York Daily News. “What would be the point in doing that — perpetuating untruth? It was important to me to tell the truth, to be completely authentic. Sharing the pain I went through is part of the healing for me, a catharsis in many ways.” (New York Daily News)

Dickey is a strong Christian and much of the book is about God’s grace and touch in his life. He hopes the book will be thought of as a story of redemption.

Dickey, featured in the Spring 2011 issue of Sports Spectrum, had this to say then, “…God’s really grown me up in a lot of ways. He’s really impressed a lot of time and energy in helping me to feel loved and worthy and that’s been a big difference maker for me…”

Look for a full review of his book coming soon to our next digital issue of Sports Spectrum in mid May.

Jeremy Lin out for regular season

New York Knicks point guard and Sports Spectrum spring cover boy, Jeremy Lin, will miss the rest of the regular season. Lin will have surgery on his torn left meniscus, and the Knicks hope to have him back by the playoffs.

“I can’t really do much. I can’t really cut or jump, so it’s pretty clear I won’t be able to help the team unless I get this fixed right now,” Lin told reporters. (Wall Street Journal)

PGA golfer Bubba Watson and his wife Angie have adopted a 1-month old baby boy. The couple tweeted a picture of their new family member, Caleb.

Watson will make an appearance on Faherty tonight on the Golf channel to talk about his adoption.

Bubba, the subject of Steve Copeland’s “Another Angle” column titled “Joy Like Bubba,” talked about how Christians should be more fun:

“I didn’t grow up in church,” Watson told me. “I didn’t know much about it. All I knew was that Christians were boring and not fun…. Now, knowing the little that I do know, that’s nothing what the Bible says. God wants you to have fun.”