From the Archives - Carson Palmer 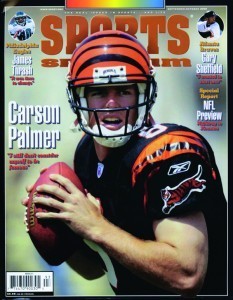 Although Carson Palmer, first-round pick of the Cincinnati Bengals, is aware of how sports success breeds headlines, the idea of “fame” is a bit foreign to him.

“I still don’t consider myself to be famous,” he says. “You’ve just gotta be yourself. I may be better than some guy at throwing a football, but he may be better at figuring out a lawsuit or doing taxes.”

Nevertheless, the stats and awards the 6′ 5″ 230-pound signal-caller has accumulated make a great case for his fame. The fifth player in USC history to win the Heisman Trophy, Palmer rewrote the Trojans’ record books. He set numerous career marks at USC, including most total offense yards (11,799, also a Pac-10 record).

Although Palmer has not always enjoyed “fame,” he has enjoyed a relationship with Christ since he was a kid. “I’ve been a Christian as long as I can remember. I’ve always been in church with my family through high school and college.”

Carson Palmer seems to understand the daily challenges and responsibilities that come with carrying the name of Christ in such a high-profile profession. Although he cannot predict what those challenges might be, he has an assurance that God has a master plan for his life.