Stephanie Brown Trafton: 'God has been preparing me for this' 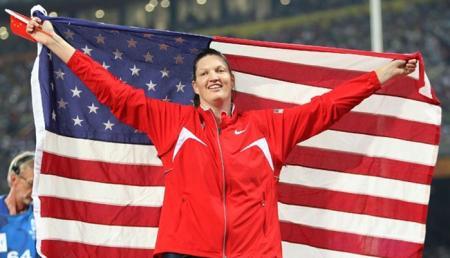 For Stephanie Brown Trafton, a year made a world of difference; not only in the discus ring, but in her personal faith, as well.

The track and field standout who had never won a U.S. track and field title or even an NCAA championship while at Cal Poly, won the discus at the 2008 Olympics. She followed that with three U.S. titles (2009, 2011, 2012) and an American record this year in the event.

The 2008 Olympic gold was the first time in 76 years (since 1932 when Lillian Copeland won) that an American woman won the event at the Olympics.

From there, it was as if a new world opened to Brown-Trafton, who is participating in her third Olympics and hails from the small community of Galt, Calif. (population 24,081) where she was given the keys to the city after winning the gold in 2008.

She ended 2008 ranked No. 1 in the world, with a personal best throw of 217-feet, 1 inch. She also became the first female in a throwing event to be awarded the Jesse Owens Female Athlete of the Year, the highest honor given by USA Track and Field.

In 2009, she kept rolling by winning her first U.S. title in the discus on June 25. And once again she had the best throw in the world (217-2) by throwing another personal best.

“I know that God has been preparing me for this for a long time,” says Brown-Trafton, who was a six-time All-American in college. “I have always been a very down-to-earth person, and with a gold medal people somehow expect me to be a larger-than-life kind of person. Trying to balance public attention and family/church life has been my biggest challenge yet, but I believe God is leading me in this direction and I know He has given me the tools to succeed in this new territory.”

Although the success has helped her grow spiritually, it has also caused her to realize how much she needs to depend on God.

“I have had to really lean on God more than ever for strength and peace in the last year,” says Brown-Trafton, who is 32, married and works in the information technology services industry when she’s not practicing or competing.

“If I try to be a control freak and take on all of life’s struggles by myself, I will quickly be reminded that God led me to this place and has promised me that He will be with me in all of my hard times. I sometimes say, ‘I can do this without you,’ but I know from life experience that as soon as I take my eyes off Him, I start to sink. With God I can walk on water, but in my own power I sink like a rock.”

Her continued growth in Christ has been helped by encouragement from others, which in turn has helped give her a noticeable enthusiasm for delving into God’s Word.

“I have been encouraged by my church, family, and community,” she says. “In addition, every time I read the Bible in my devotions I am encouraged because there is something that is relevant in my life. If you pick up the Bible and read but don’t find anything relevant, it might mean that life is getting stagnant. God works through us when we are out in the world interacting with people. The Bible is made up of stories about God and people taking action. It’s really exciting to find that, even though the Bible is thousands of years old, it was written for the people of today and tomorrow, too!”