Devotion of the Week - "Chuckstrong"

There is one story and one team that I have enjoyed following this year that emphasized the motto of always having hope: Chuck Pagano and the Indianapolis Colts. 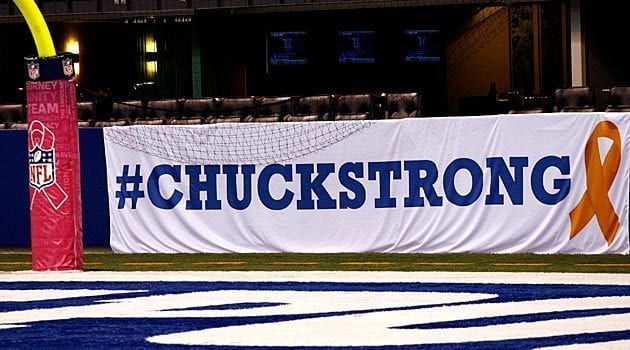 After winning just two games in 2011, firing their coach and losing their franchise quarterback Peyton Manning, the Colts were a team with little expectations for 2012. There was a rookie signal caller in Andrew Luck and a new first-year head coach in Chuck Pagano. And quickly into the season came sad news. On October 1st, Pagano was diagnosed with leukemia and would not be able to continue coaching due to cancer treatment. This story would not only touch the entire Colts organization and the city of Indianapolis, but the entire football community as well.

All around Indianapolis, you saw the phrase “Chuckstrong” on t-shirts, bracelets, billboards, etc. Many Colts players (and even cheerleaders) shaved their heads to support the head coach. The team became motivated and inspired on the field, as his fight took place off the field. And as the team kept winning, hope grew stronger. Hope for their coach, and hope in winning and making the playoffs.

Pagano persevered and beat cancer, returning to coach the team on Christmas Eve as the Colts beat their division rival, Houston, 28-16, finishing the year 11-5 and securing a playoff spot. When I watched the celebration the team had in the locker room that day, it brought me great joy as a NFL fan and as a Christian seeing what hope can do to a group of individuals when the odds are stacked up against them.

But while this Colts team had a great season and has a bright future on paper with all the young talent, there is no certainty that they will get back to this same spot next year.And that is the difference between a worldly hope and a Biblical hope. With a Biblical hope comes absolute certainty!

The hope that we are talking about involves the hope of redemption. The hope that through the death and resurrection of Jesus, we all can be with Him in paradise if we confess that Jesus is LORD!

Paul talks about this kind of hope and absolute certainty in his epistle to the Romans when he talks about his present sufferings as a prisoner in Rome. But, the letter also talks about a hope Paul has that will bring him future glory!

For in this hope we were saved. But hope that is seen is no hope at all. Who hopes for what they already have?  But if we hope for what we do not yet have, we wait for it patiently.

In the same way, the Spirit helps us in our weakness. We do not know what we ought to pray for, but the Spirit himself intercedes for us through wordless groans. And he who searches our hearts knows the mind of the Spirit, because the Spirit intercedes for God’s people in accordance with the will of God. (Romans 8:24-27)

In these verses, Paul talks about the hope that is God liberating us from sin and the Law while bringing us to freedom and getting to see the full Glory of God in Heaven one day. That is a hope that when we profess with our heart and mind that Jesus is the only way to get to Heaven will be absolutely certain!

Today, I exhort you, in times of trouble to look on The Hope and pray! In times of trouble, we have the Holy Spirit always with us to intercede when we don’t have the words to say something. It is tough for us sometimes to ask for help, but God will bring us that help if we ask for it, if it is according to His will! In weakness, go to the Lord with the confidence that He can renew our strength and the certainty that hope in Him brings salvation to all who believe!