From the Archives -- John Wooden, his legacy, and his top five "Woodenisms" 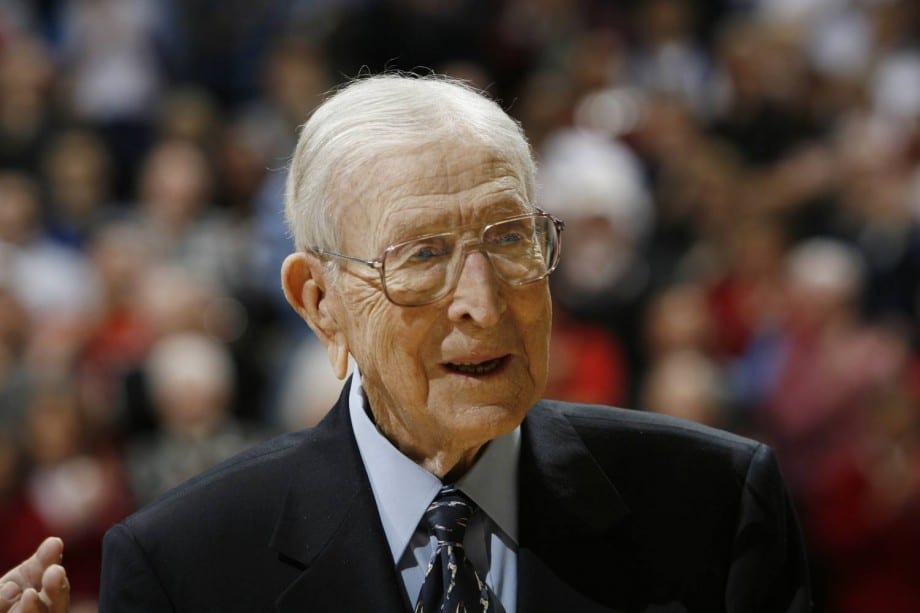 John Wooden is, without question, the most successful, most respected, most everything collegiate basketball coach in the universe.

The “Wizard of Westwood” ruled the college hoops world from the early 1960s to the mid 1970s – winning the NCAA championship 10 times in 12 years. During that stretch he was named Coach of the Year by UPI six times, and in 29 years (all but two at UCLA) he compiled a record of 664-162 for a staggering .804 winning percentage. 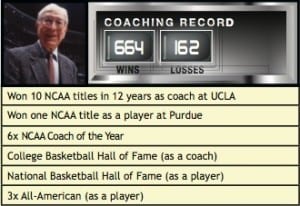 He also had four 30-0 seasons, and, at one point, UCLA won 88 consecutive games, a record that still stands.

But most probably didn’t know he was just as good of a player. At Purdue, he earned All-American three times, was named college player of the year in 1932 when he led Purdue to the national championship.

He is also the only person to be inducted into the Basketball Hall of Fame as a player and a coach.

Wooden was the best on the hardwood, but to really understand his Hoosier heart (born in Martinsville, Indiana, in 1910) and his yardstick for success, you must look at the Wooden Award – given annually to the most outstanding college basketball player who has a minimum grade point average of 2.0.

It’s the only award that stresses the old GPA. Wooden, a former high school English teacher who wrote his Masters thesis on poetry, feels success means giving it all in the classroom and on the court.

“I coined my own definition of success, which you can read (in his book They Call Me Coach) that goes, ‘Peace of mind, which can be attained only through self-satisfaction, knowing you made the effort to be the best of which you’re capable,” he said.

Wooden’s coaching philosophy did not focus on winning – the very thing that marked UCLA as the best college team for two decades. His emphasis? Character.

He strived to build character into his players – the stuff that would make them disciplined, humble, and consistent – whether they won or lost the basketball game.

One of his most cherished moments as a coach was the academic success and character of his players.

“I’m most proud of the fact that practically every player I had, at UCLA and Indiana State, graduated and has done reasonably well,” Wooden said. “I think 30 ore more of my lettermen became attorneys. There are several doctors and dentists and ministers and teachers.” 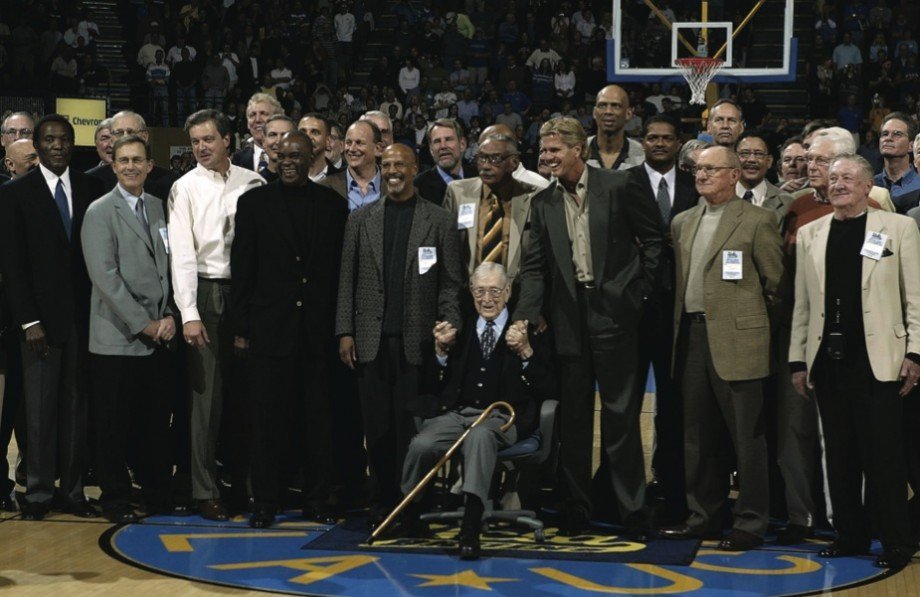 Wooden felt most proud of the character of his players.

“Some things I remember very well – certain things that players have done,” he said. “Like the time a reporter asked one of my players (I happened to be standing nearby), ‘What about your racial problems on the team?’ This player just stood up and said, ‘You don’t know our coach, do you? He doesn’t see race. All he sees is what he works for, people and ballplayers, and how they fit in. That’s all he sees.’ He then turned and walked away from the fellow. That gave me a special bit of pleasure.”

Through much of his life, the man many called “Coach” had a wonderful assistant, wife, and partner by the name of Nell. She died March 21, 1985, but lived on in Wooden’s heart, and her influence was evidenced by his faith.

Wooden came to know Jesus Christ as his “Master Coach” and Savior through the testimony of Nell. He accepted Christ at first, he feels, more because of Nell’s convictions than his own desire to know God personally.

“I would say it was several years after I accepted Christ formally that I really took (my salvation) to heart,” he said. “It was a gradual process. There wasn’t any lightning bolt or quick revelation.”

His love and admiration for Nell was most evident late his in life by his dedication to remember her. After her passing, he visited her grave then wrote a love letter on the 21st of each month and placed it on the pillow she used while they were married.

His faith, which grew and was strengthened by his daily Bible reading, helped him through his grieving and also helped him remain steady until his passing.

So it’s not surprising that he wanted to be remembered for his faith and not the success he had in basketball.

In a book that Wooden wrote in 2003, They Call Me Coach, he said, “I have always tried to make it clear that basketball is not the ultimate. It is of small importance in comparison to the total life we live. There is only one kind of life that truly wins, and that is the one that places faith in the hands of the Savior.”

In all, he wrote or co-authored eight books, including the John R. Wooden Course Coaching Guide which included the famous “Pyramid of Success” that took him 14 years to develop and which he finished in 1948.

The Pyramid included 25 behaviors he saw as necessary to achieve success. 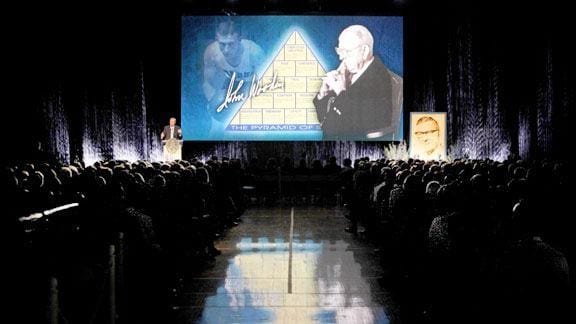 Wooden was also known for the Seven-Point Creed, although he didn’t write it. His father, Joshua, gave it to him in grammar school.

The seven points were: Be true to yourself; Make each day your masterpiece; Help others; Drink deeply from good books, especially the Bible; Make friendship a fine art; Build a shelter against a rainy day; Pray for guidance and give thanks for your blessings every day.

But he wasn’t just a writer, he was a gifted speaker, as well.

He was still in demand as a speaker late in his life, taking 18 engagements each year. But his two real interests were his family (children James and Nancy, their spouses, his grandchildren and great grandchildren) and his writing.

Is he the poet laureate of the coaching community?

You be the judge. Here’s a sampling of his gift:

The years have left their imprint on my hands and on my face;

Erect no longer is my walk, and slower is my pace.

But there is no fear within my heart, because I’m growing old;

I only wish I had more time to better serve my Lord.

They call him Coach, but he’s so much more than that. He’s a person who gave his best for God. What could be better?

By Tom Felton and Brett Honeycutt

This story comes from the pages of Sports Spectrum’s Silver Anniversary Edition.

No coach has had as much tournament success as the late John Wooden, who won 10 national championships in a 12-year span, including seven in a row as the head coach of UCLA. Wooden was also known for his resilient faith and inspirational messages to his players. Below are five inspirational “Woodenisms” regarding faith and a Christ-centered life.

1) “I always tried to make clear that basketball is not the ultimate. It is of small importance in comparison to the total life we live. There is only one kind of life that truly wins, and that is the one that places faith in the hands of the Savior. Until that is done, we are on an aimless course that runs in circles and goes nowhere.”

2) “There are many things that are essential to arriving at true peace of mind, and one of the most important is faith, which cannot be acquired without prayer.”

4) “It is most difficult, in my mind, to separate any success, whether it be in your profession, your family, or as in my case, in basketball, from religion.”

5) “If I were ever persecuted for my religion, I truly hope there would be enough evidence to convict me.”