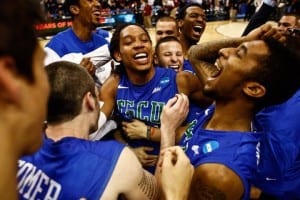 The NCAA Tournament is one of my favorite events in sports. The reason for that is that college basketball always seems to exemplify the cliché that anything can happen. This year, that cliché has stuck throughout the entire season with top-five teams losing left and right. The field was as wide open as ever, and March Madness has definitely lived up to its namesake, especially in one section of the United States.

The state of Florida has three teams currently in the Sweet Sixteen. Two of the teams were seen as pre-tournament favorites to go far in the University of Florida and the University of Miami. However, one team has come out of nowhere out of the Atlantic Sun conference to entertain basketball fans all across the country: Florida Gulf Coast

Florida Gulf Coast went into Philadelphia last week as unknowns  to most of the college basketball world. After their second-round win over Georgetown out of the Big East and third-round win over San Diego State, the Eagles of FGCU have arisen as celebrities due to their high flying dunks and great personalities. Their leader is shooting guard Sherwood Brown, and point guard Brett Comer has a knack for making great passes to set up the dunk show. “Dunk City” will be in Arlington, Texas, this weekend for the South Regional semifinals as they take on Florida in the final game Friday night.

In the Bible, we always find instances where the hero is not exactly the most handsome or most popular figure. Take a look at the root of how one of the greatest kings of Israel became King. David was the youngest of his brothers and was out tending the sheep for his father Jesse. In the book of 1 Samuel, we see the struggles of Saul, the first king of Israel, who continues to do things his way and not God’s way.

In 1 Samuel 16, God tells the prophet Samuel to go to the house of Jesse and anoint the person that He indicates will be the next king. Samuel goes to the house and brings Jesse’s sons to the sacrifice to find the next king (1 Samuel 16:5). He meets the older son, Eliab, who Samuel thinks will surely be the new king because he is the oldest and most handsome. But, God has other ideas.

Jesse presented Samuel with all his sons, but forgot about David, who was out tending his sheep. God chose the one who was tending the sheep to be the next king. In the next chapter, we see David pull off the ultimate cinderella story by defeating the overall No. 1 seed of the Philistines, Goliath, with stones and a slingshot.

Today, I exhort you to always have hope that you can do the impossible when God is with you. David believed that the Lord was with him even though he was not the greatest warrior in the eyes of his people or his foe. Whenever I think of hope, I think of what the prophet Isaiah tells us:

“But they who wait for the Lord shall renew their strength; they shall mount up with wings like eagles; they shall run and not be weary; they shall walk and not faint.” (Isaiah 40:31)

David was seen as the No. 16 seed of his brothers, but God knew, based on his heart, that he would be the new king of Israel. He knew God had a purpose for him and would protect him even when going up against the biggest foe. David put trust in something bigger than himself in order to get the victory for the Lord.