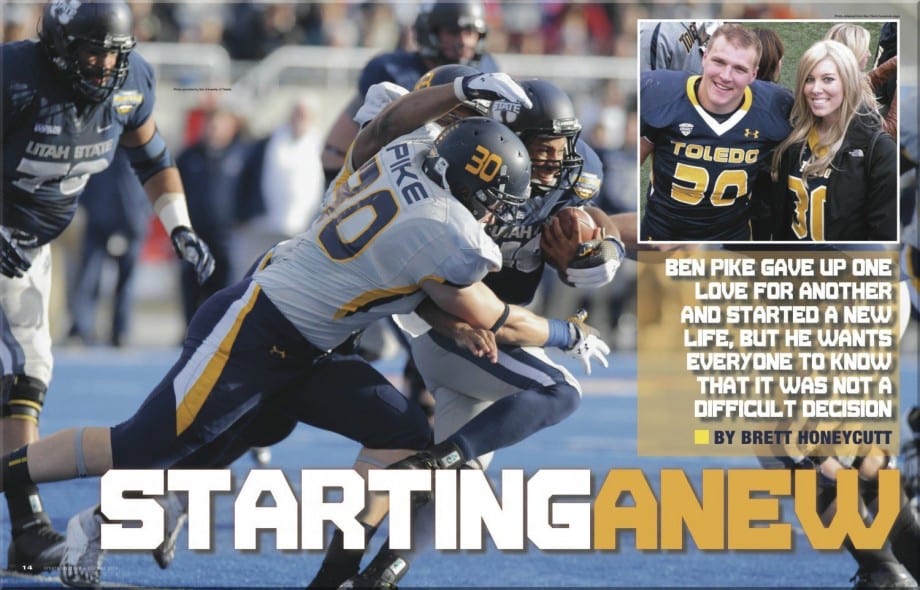 He also won’t be running onto the field at the Glass Bowl, the Rockets’ home turf, on Sept. 14 when Toledo plays its first home game this season against Eastern Washington.

Instead, his surroundings will be a little different and more than eight hours away.

Pike traded in his senior year at Toledo, where he would have been fending off offensive lineman to chase down quarterbacks or plunging through the line to stop running backs, for teaching and coaching teenagers at Fort Zumwalt West High in O’Fallon, Mo., about 45 minutes outside of St. Louis.

But there’s more to the story than someone giving up college football to start their career.

Pike’s motivation to forgo his senior season was borne out of a love, not to help himself but to help someone else.

Ben Pike met Ashlee Barrett at an Athletes in Action Bible study on Toledo’s campus. Pike was a freshman and Barrett was a junior who had transferred from the University of Evansville, along with her coach, to play basketball.

Pike pursued and Barrett, Pike admits, was a little reluctant. A freshman pursuing a junior? That was the holdup, but only for a little while.

“When we started being around each other and hanging out, it was an instant connection. It was pretty special,” Pike tells Sports Spectrum. “I always tell people, first time I saw her, the first thing I noticed was her outward beauty; she was tall, 5-foot 11, long, blonde hair, big, blue eyes. But as I got to know her more personally, I got to see what a great person she was. She was kind to others, which was amazing to me.”

But five months after their engagement, in April of 2012, Pike received a phone call that his fiancée had to be hospitalized.

“I got the first flight out of the Detroit airport,” Pike says. “You walk into this room and you see the person you love hooked up to a ventilator…it’s very, very heartbreaking…What had happened, she had become septic, so the infection had spread through her blood stream. The doctors weren’t sure she would make it through the night.”

Barrett, who had been teaching after her graduation, made it through the night, and Pike thought he and his fiancée would be going home soon. Then her parents and a doctor walked into the room.

“That’s when we could tell something was wrong and that’s when we got the news that she had leukemia,” Pike says. “When we heard that, it was very, very emotional. A lot of tears were going and a lot of people were not sure what was going on because it’s kind of hard to believe.”

“In the midst of all that’s going on, I was standing by her side, and she took my hand and looked me in the eye and said, ‘I’m so glad it’s me and not you.’ For her to just say that when she’s going through the worst thing that’s ever happened to her just kind of speaks to what kind of person she is in her substance and her kindness for other people. It was just truly remarkable to me.”

Admittedly, Pike struggled with reconciling his faith with what his then fiancée was going through in the hospital.

“For me, initially, I was mad. I was,” Pike says. “I didn’t understand why it was happening. I didn’t think she deserved it. I couldn’t see how it could come to this. But I think that was a very natural response to have. As I got time to step back from the situation and look, I started to realize…I talked with God and prayed and had many conversations about this…He was able to give me a peace that it was okay; that in the end, it was all going to work out. I may not understand why, but I’m not supposed to understand why right now. But we just know and we trust in God that at the end of the day, that something amazing is going to happen, the glory is going to go to Him.”

Prayer, treatments, and loving support from Pike and seemingly everyone helped during Barrett’s ordeal with leukemia.

Nine months passed, including Pike playing his junior season at Toledo as he helped the Rockets to a 9-4 season, including an eight-game win streak and a bowl bid to the Famous Idaho Potato Bowl against Utah State on Dec. 15. Toledo lost, but it was the first time the program had back-to-back nine-win seasons since 2004 and 2005.

Because of everything that had happened, Pike had begun discussing with his coaches, at some point during the season, about the possibility of not coming back his senior year so that he could be with Ashlee.

“I told him there’s a good possibility that I won’t be coming back for my senior year,” Pike recalls, telling head coach Matt Campbell. “He said, ‘Ben, that’s fine. We’ll treat you like a senior this year. You can do all the things the seniors get to do…At the end of the season, if that’s still what you want to do, that’s great, you go ahead and do that. If you want to come back, you can come back.’”

His coaches understood what was important and things seemed to be going well for everyone. 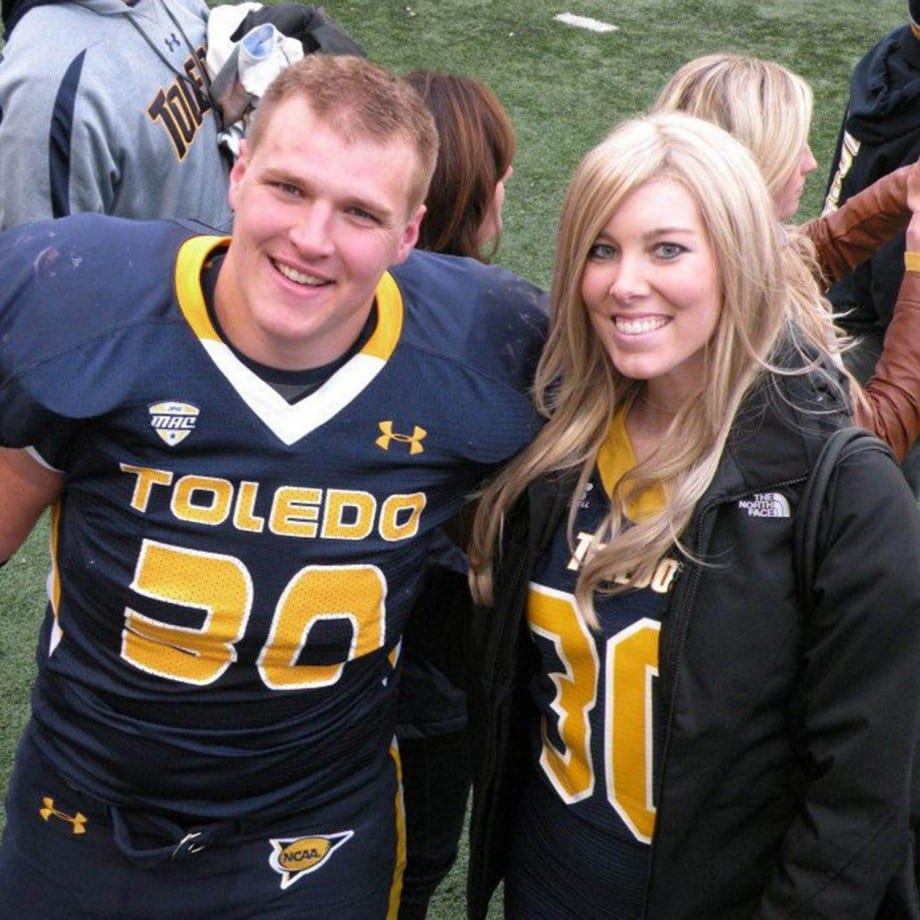 In late January, Pike was greeted with a visit from his parents.

“It was a Friday night. I had called and texted (Ashlee) that night and she hadn’t responded,” Pike recalls. “So I kind of knew something wasn’t quite right, but didn’t know what…My parents came to tell me and I knew something wasn’t quite right…They came to tell me Ashlee’s cancer had come back. Again, that moment, I wasn’t quite sure why it was happening, because I thought we were out of the woods and that we were moving on to bigger and brighter things.”

This time, though, it was different. There was a resiliency and a toughness in his mind and heart that had been cultivated from the first experience.

“We both were going to hunker down and do it again. At the end of the day, we know that God is in control,” Pike says. “This second time around is where we’ve really seen some good things, how it affected other people and what’s come from it…We know that through all bad things, that if we trust God, He’s going to work it for His glory and His good…When times are hard, and you think you can’t go on, He’s given us the strength to get through another day.

“She’s an inspiration to me…her positive attitude is remarkable to me.” 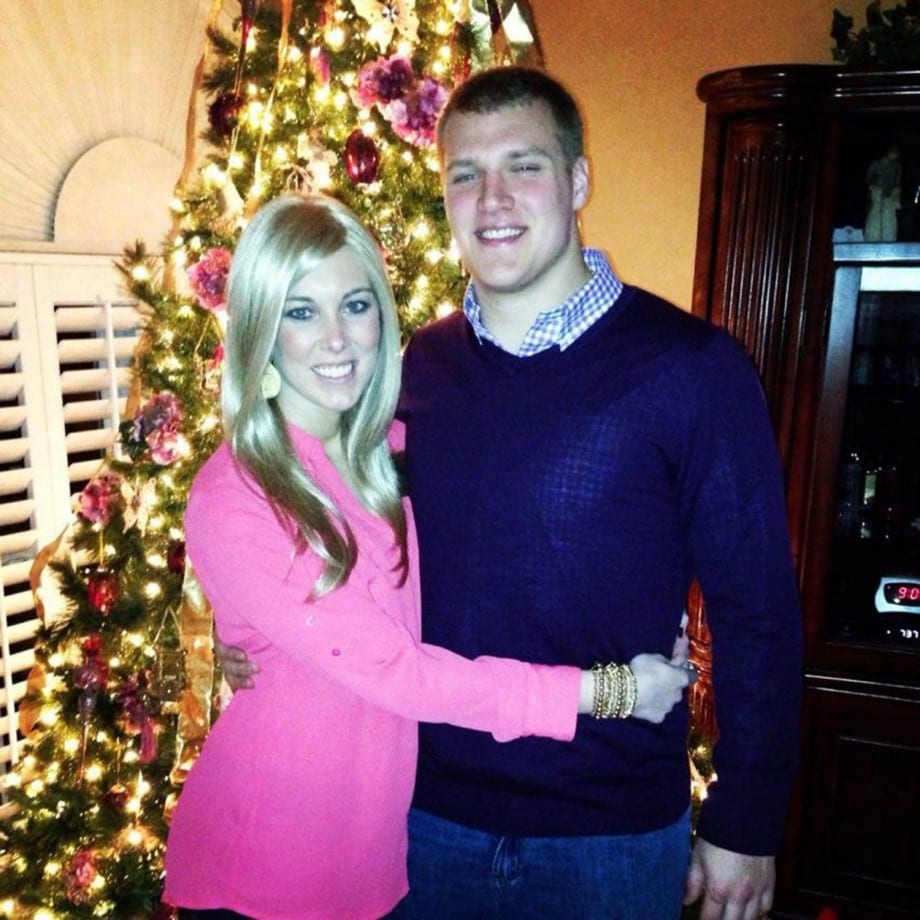 That was enough to compel Pike to give up football. So, in February he did just that. He knew he wanted to be with Ashlee, the person he wanted to marry, and he knew she needed him.

Pike doesn’t want to be admired because of his decision, though. All of the admiration, he said, belongs to Ashlee. Giving up football to help her fight cancer was an easy decision.

“A lot of people are saying how that I’m doing something admirable or sacrificing something, and I just don’t see it that way,” Pike says. “I see it as I’m gaining the love of my life and I get to spend every day with her. At the end of the day, it was an easy decision because I need to be here for her. I need to be here to make sure she gets through this and I can support her and be with her every day to love and support her. At the end of the day, it wasn’t a hard decision at all. I’m not the one who needs to be admired or looked up to, she needs to be the one who’s looked up to and admired for how she’s…fighting day in and day out.” 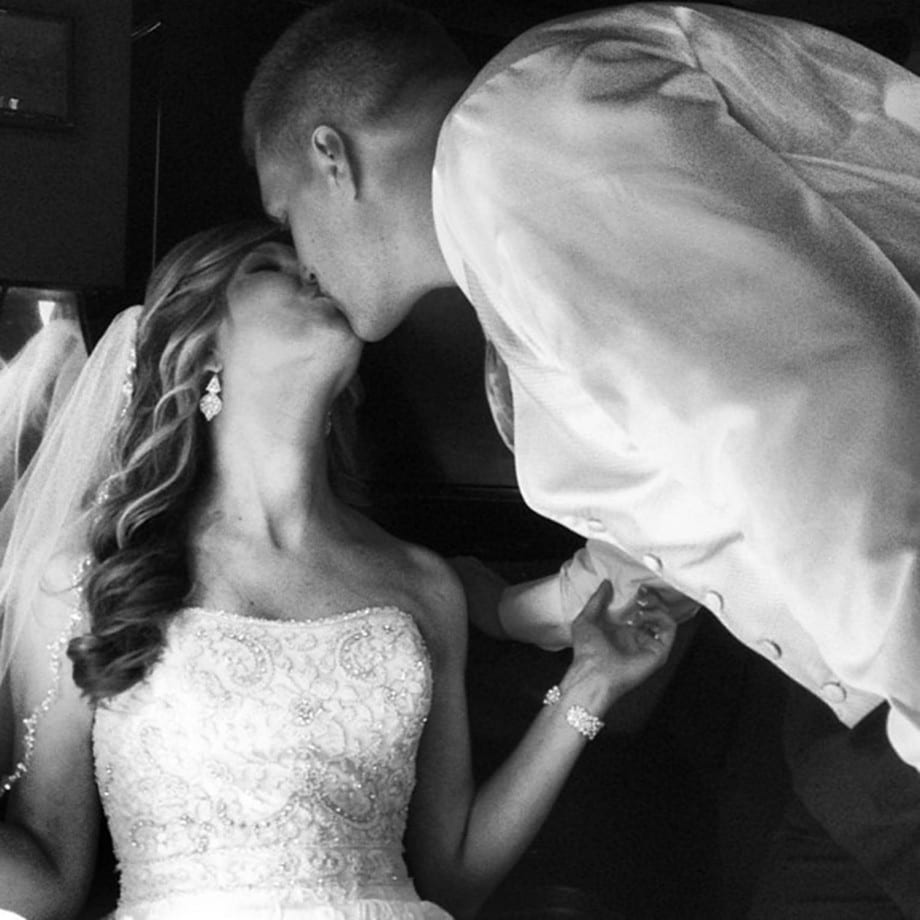 They were married this summer, on June 15. There was no receiving line because of the fear of germs from hugs and handshakes. Their honeymoon will be at a later date, too, so that Ashlee can remain close to her doctors, who are still monitoring everything.

His coaches and teammates, who had supported him emotionally and given him rides to and from the airport while he flew back and forth from Toledo to St. Charles, Mo., before finally moving to be closer to Ashlee, were supporting him once again.

Even more important is that their life with each other began with a faith journey, which both committed to before Ashlee found out she had cancer.

They both had committed to follow Christ, but Ashlee wanted to get things straight with her baptism.

“When we first met, we would talk about faith a lot,” Ben Pike says. “She was born and raised Catholic, and I was born and raised Baptist. We began to go to churches together and started to kind of explore that route. She found a church that she really liked, First Baptist Church Harvester in St. Charles, which is where she lives. That weekend before she found out she had cancer, she made the decision to be baptized.”

The pastor of the church has been someone the couple has leaned on for guidance.

“Bob Engle has been a huge, huge support for her and us,” Ben Pike says. “He has just been there for us. So, we’ve had support from every direction.”

“Even though cancer will be a part of our daily lives for a few more years,” Pike told the Cleveland Plain Dealer before his wedding. “We’re both very excited to be able to close that chapter on our lives and start a new chapter.”

Brett Honeycutt is the managing editor of Sport Spectrum magazine. This story was published in the August 2013 Sports Spectrum DigiMag. Print and digital subscribers, log in here to view. Not a subscriber to Sports Spectrum? Subscribe here.