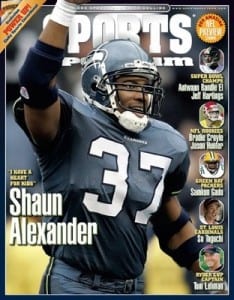 Because of who he is—the NFL’s MVP and single-season record holder for touchdowns—wide-eyed kids excitedly surround him as he arrives, anxious to peer into their hero’s face.

And because of who he once was—a kid, a hero worshiper like the ones that encircle him—Shaun Alexander appreciates the power of the moment. He signs autographs, slaps high fives, and poses for cellphone photos, smiling for each click. He doesn’t deny a request.

Alexander, the Seattle Seahawks’ running back with the knack for scoring touchdowns, is touring the old YMCA in his hometown of Florence, Kentucky, the building he bought last year for $1.8 million. The building he now owns is the same center he and his brother couldn’t play basketball in as kids because they didn’t have enough money.

“I have a heart for kids,” Alexander explains when asked about why he bought the building. “It’s a place where kids can come and have fun and a place to help them stay out of trouble…”

Read the remainder of Shaun Alexander’s story from our September/October 2006 issue here.