Life In The Fast Lane 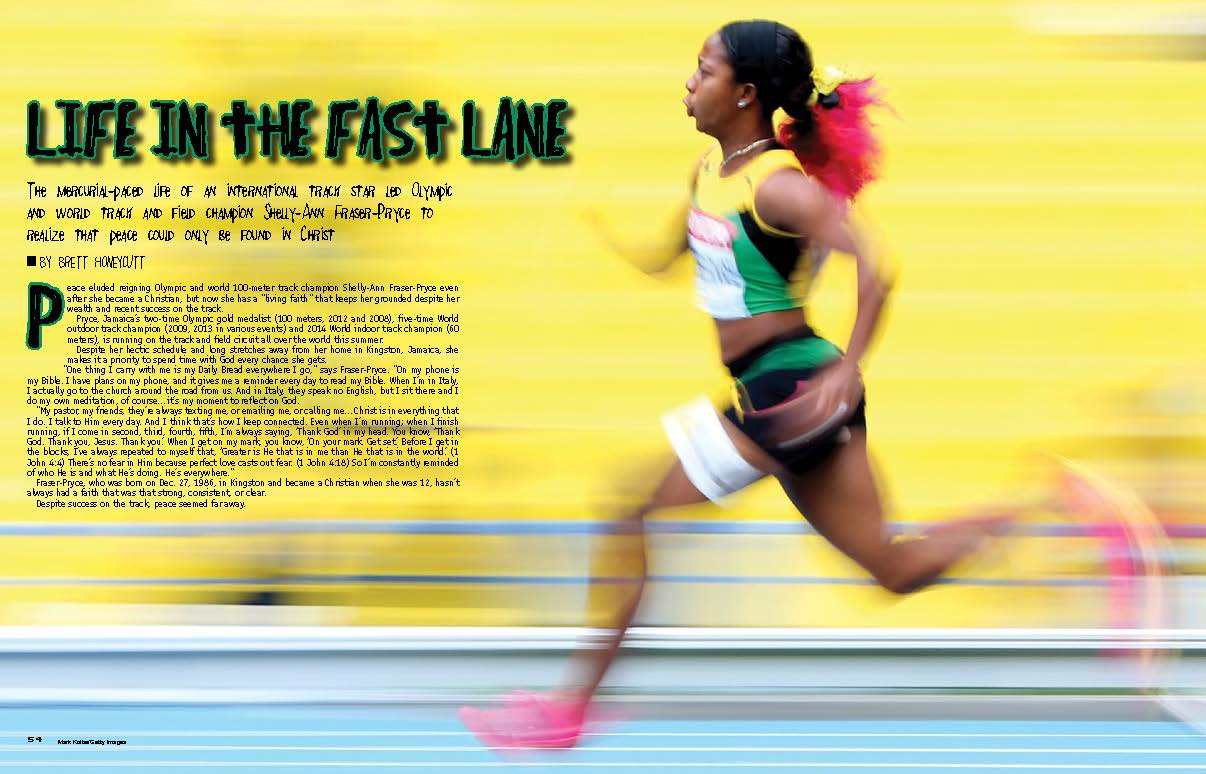 Peace eluded reigning Olympic and world 100-meter track champion even after she became a Christian, but now she has a “living faith” that keeps her grounded despite her wealth and recent success
on the track.

Despite her hectic schedule and long stretches away from her home in Kingston, Jamaica, she makes it a priority to spend time with God every chance she gets. “One thing I carry with me is my Daily Bread everywhere I go,” says Fraser-Pryce. “On my phone is my Bible. I have plans on my phone, and it gives me a reminder every day to read my Bible. When I’m in Italy, I actually go to the church around the road from us. And in Italy, they speak no English, but I sit there and I do my own meditation, of course…it’s my moment to reflect on God.

“My pastor, my friends, they’re always texting me, or emailing me, or calling me…Christ is in everything that I do. I talk to Him every day. And I think that’s how I keep connected. Even when I’m running; when I finish running, if I come in second, third, fourth, fifth, I’m always saying, ‘Thank God’ in my head. You know, ‘Thank God. Thank you, Jesus. Thank you.’ When I get on my mark, you know, ‘On your mark. Get set.’ Before I get in the blocks, I’ve always repeated to myself that, ‘Greater is He that is in me than He that is in the world.’ (1 John 4:4) There’s no fear in Him because perfect love casts out fear. (1 John 4:18) So I’m constantly reminded of who He is and what He’s doing. He’s everywhere.”

Fraser-Pryce, who was born on Dec. 27, 1986, in Kingston and became a Christian when she was 12, hasn’t always had a faith that was that strong, consistent, or clear. Despite success on the track, peace seemed far away. 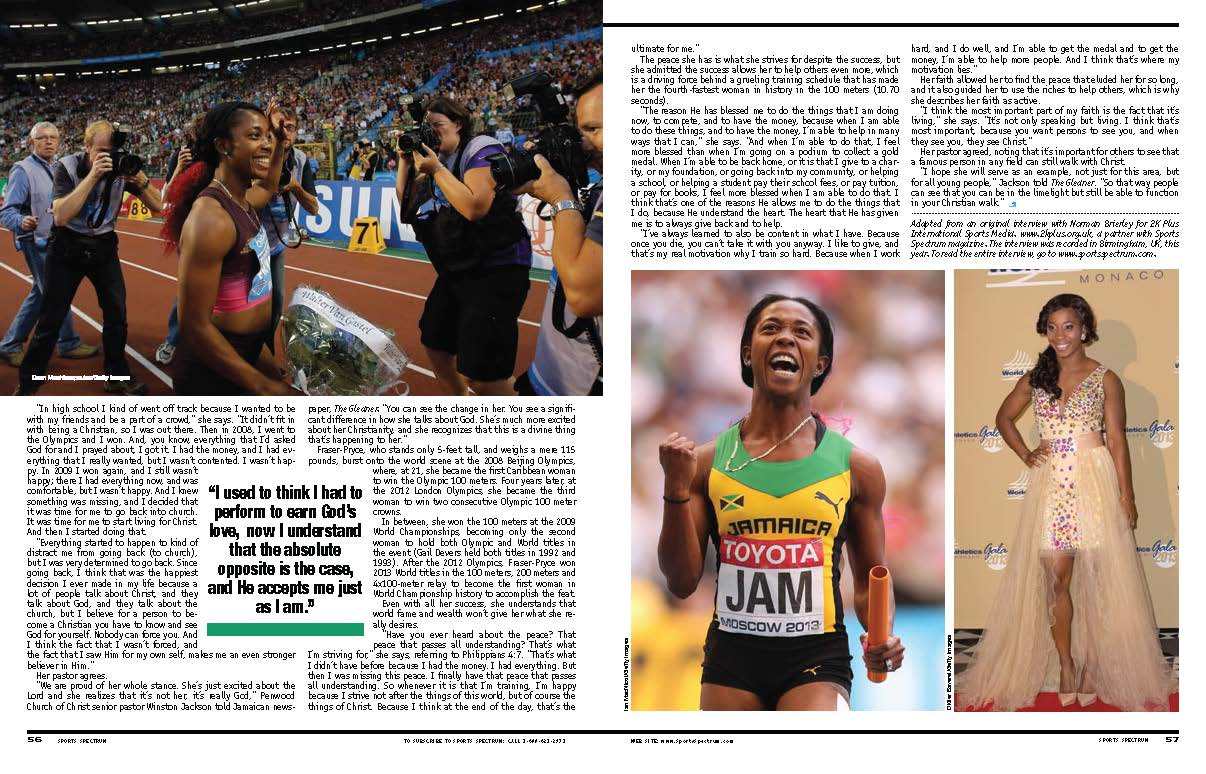 “In high school I kind of went off track because I wanted to be with my friends and be a part of a crowd,” she says. “It didn’t fit in with being a Christian, so I was out there. Then in 2008, I went to the Olympics and I won. And, you know, everything that I’d asked God for and I prayed about, I got it. I had the money, and I had everything that I really wanted, but I wasn’t contented. I wasn’t happy. In 2009 I won again, and I still wasn’t happy; there I had everything now, and was comfortable, but I wasn’t happy. And I knew something was missing, and I decided that it was time for me to go back into church. It was time for me to start living for Christ. And then I started doing that.

“Everything started to happen to kind of distract me from going back (to church), but I was very determined to go back. Since going back, I think that was the happiest decision I ever made in my life because a lot of people talk about Christ, and they talk about God, and they talk about the church, but I believe for a person to become a Christian you have to know and see God for yourself. Nobody can force you. And I think the fact that I wasn’t forced, and the fact that I saw Him for my own self, makes me an even stronger believer in Him.”

“We are proud of her whole stance. She’s just excited about the Lord and she realizes that it’s not her, it’s really God,” Penwood Church of Christ senior pastor Winston Jackson told Jamaican newspaper, The Gleaner. “You can see the change in her. You see a significant difference in how she talks about God. She’s much more excited about her Christianity, and she recognizes that this is a divine thing that’s happening to her.”

In between, she won the 100 meters at the 2009 World Championships, becoming only the second woman to hold both Olympic and World titles in the event (Gail Devers held both titles in 1992 and 1993). After the 2012 Olympics, Fraser-Pryce won 2013 World titles in the 100 meters, 200 meters and 4×100-meter relay to become the first woman in World Championship history to accomplish the feat.

Even with all her success, she understands that world fame and wealth won’t give her what she really desires.

“Have you ever heard about the peace? That peace that passes all understanding? That’s what I’m striving for,” she says, referring to Philippians 4:7. “That’s what I didn’t have before because I had the money. I had everything. But then I was missing this peace. I finally have that peace that passes all understanding. So whenever it is that I’m training, I’m happy because I strive not after the things of this world, but of course the things of Christ. Because I think at the end of the day, that’s the ultimate for me.”

The peace she has is what she strives for despite the success, but she admitted the success allows her to help others even more, which is a driving force behind a grueling training schedule that has made her the fourth-fastest woman in history in the 100 meters (10.70 seconds).

“The reason He has blessed me to do the things that I am doing now, to compete, and to have the money, because when I am able to do these things, and to have the money, I’m able to help in many
ways that I can,” she says. “And when I’m able to do that, I feel more blessed than when I’m going on a podium to collect a gold medal. When I’m able to be back home, or it is that I give to a charity, or my foundation, or going back into my community, or helping a school, or helping a student pay their school fees, or pay tuition, or pay for books, I feel more blessed when I am able to do that. I think that’s one of the reasons He allows me to do the things that I do, because He understand the heart. The heart that He has given me is to always give back and to help.

“I’ve always learned to also be content in what I have. Because once you die, you can’t take it with you anyway. I like to give, and that’s my real motivation why I train so hard. Because when I work hard, and I do well, and I’m able to get the medal and to get the money, I’m able to help more people. And I think that’s where my motivation lies.”

Her faith allowed her to find the peace that eluded her for so long, and it also guided her to use the riches to help others, which is why she describes her faith as active.

“I think the most important part of my faith is the fact that it’s living,” she says. “It’s not only speaking but living. I think that’s most important, because you want persons to see you, and when they see you, they see Christ.”

Her pastor agreed, noting that it’s important for others to see that a famous person in any field can still walk with Christ.

“I hope she will serve as an example, not just for this area, but for all young people,” Jackson told The Gleaner. “So that way people can see that you can be in the limelight but still be able to function in your Christian walk.”

Adapted from an original interview with Norman Brierley for 2K Plus
International Sports Media. www.2kplus.org.uk, a partner with Sports
Spectrum magazine.