When Willie Taggart took over the head football job for the Oregon Ducks, he knew he had to change the culture.

But, in order to improve a team coming off a disappointing 4-8 record, Taggart focused on developing the team’s chemistry off the field.

The student-athletes told their new head coach that they would go days without seeing each other during the offseason because they didn’t hang our together.

So Taggart, overflowing with energy and positivity, went to work and added team dinners three nights a week at the team’s facility, had the coaches families come in on Thursday’s, and institutes mandatory breakfast checks in the dining hall.

The team-building events continued with a senior retreat, video game tournaments, movie night, and a day at the pool.

But, what may have helped gel the team faster was splitting the team into nine groups during fall camp, to talk about lives away from football.

“You learn so much about an individual and what makes them tick,” Taggart said to ESPN. “… Guys, they learn more about each other and they start to have a little more compassion for each other.” 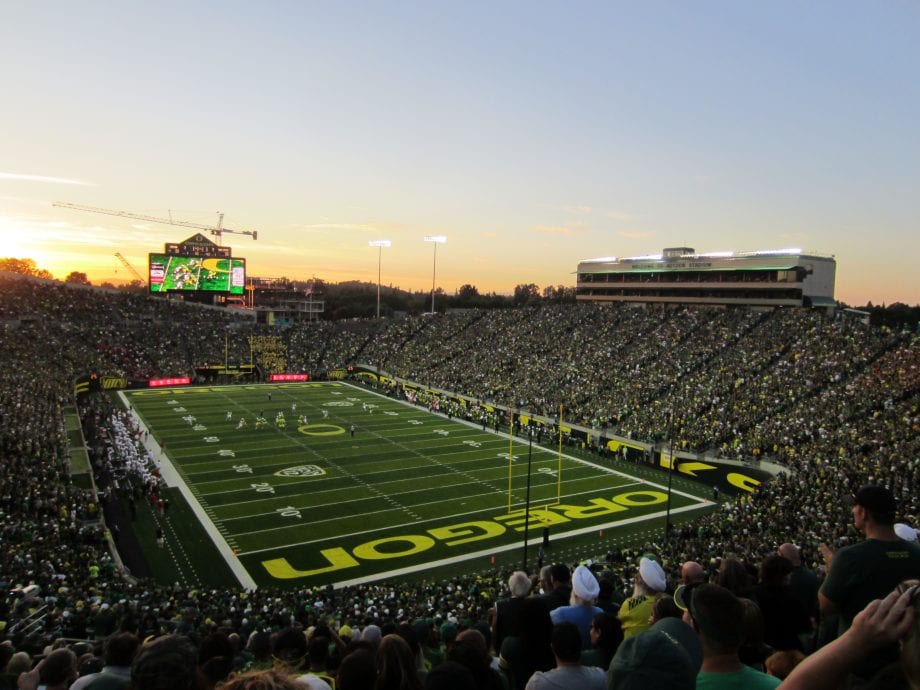 Autzen Stadium in Eugene, Ore. By Another Believer (Own work) [CC BY-SA 3.0 (http://creativecommons.org/licenses/by-sa/3.0)], via Wikimedia Commons

Sophomore linebacker Troy Dye has noticed the changes around the facility as well and it’s shown in the locker room and on the field.

“It definitely is night and day,” Dye said to ESPN. “You can ask anybody on the team and people actually enjoy coming to the building now. People enjoy being here and are happy and grateful.

The good vibes surrounding the program almost changed as quickly as the Ducks uniform combinations. During offseason conditioning drills, three players were hospitalized after going through a series of basic military type training, according to The Oregonain.

But, the team pressed on and have impressed on the field after it’s first two games by outscoring their opponents 119-56, including a 42-35 home victory over Nebraska.

“I’m so proud of this football team and how the guys are working together and playing for one another,” Taggart said to ESPN. “That’s what we see more than anything — you see a group of young men having fun and playing for each other — and when you get that, the winning comes easy.”

The Oregon Ducks will put its perfect record on the line on the road against the Wyoming Cowboys on Saturday at 5 p.m. MST.

As a coach, what has been the most successful team-building activities you have put together for your players? Let us know at our One Coach Facebook page.