On the PGA Tour, a player’s caddy is there to help, guide, encourage and lead him in the proper direction.

For two-time Masters winner Bubba Watson, that’s exactly what his caddy, Ted Scott, has done through multiple tournament wins and millions of dollars of prize money collected.
But more important than riches won or titles earned is the spiritual mentorship and help Scott continues to provide Watson in their long-term and sometimes publicly stormy relationship.

“I just feel like iron sharpens iron and if God changes me for the better as much He changes Bubba, then that would be awesome,” says Scott, 41, a native of Lafayette, Louisiana, who has worked with Watson since 2006.

“Bubba has such a heart for the Lord, he has really matured so much,” he adds.
Both Watson and Scott agree that part of the reason they work together is their shared Christian faith, which also includes Bubba’s wife, Angie, a former WNBA star, and his trainer, Andrew Fischer.

Watson has often spoken about what Scott has meant to his life and career, both on and off the course.

“Ted has been a big part of my success. I appreciate the effect he has had in my golf and my life,” Watson said in a pre-tournament interview at The Memorial Tournament in 2013.
But that hasn’t prevented some much viewed and discussed televised blowups with Watson curtly calling out Scott. 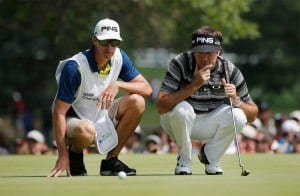 “People think Bubba is so mean and terrible to me,” Scott says. “Bubba is just a very emotional person. He is really happy 99% of the time, he is sad ½ percent of the time and angry ½ percent.”

But early in their career working together, those percentages were reversed, and it led Scott to consider one of the biggest rarities on the PGA Tour, firing his own player.

“My wife Melanie is a great counselor to me and there is a verse in the Bible that says if you have a problem with your brother go to him and let him know that,” Scott says.

“Bubba was never the same person on and off the course, and he was never very happy.”
When Scott told his wife what he was planning to do, he also let her know the realities of a caddy player relationship.

“I may not have a job when this is over,” he told Melanie.

Early in the 2010 season, before they had ever won a PGA Tour event, Scott met with Watson and delivered the hard truth.

“If you’re going to continue to act like this,” the caddy recalled, “I just can’t work for you. As much as I love you, and I think you’re a great player, it’s not in the cards to do this. When he said I was right, I said, ‘I am, really?’

“Bubba handled it very well. I totally expected him to say, ‘You’re fired.’”

Watson, who was baptized with his wife in 2004 in what he calls the start of his spiritual journey, talked to his wife and trainer about what Scott said and agreed to try and change.

The fact of being able to tell a hard truth to a fellow Christian is one of the hallmarks of a mature believer, agreed PGA Tour golfer Aaron Baddeley, who shares Watson’s Christian agent and is another strong believer.

“Teddy has been great for Bubba,” Baddeley says. “He has mentored him as a friend and been a big part of Bubba’s (spiritual) growth. Teddy has been able to speak truth into Bubba’s life.”

“The really good caddies say things you don’t want to hear. I think Teddy has helped him a lot. He listened to Teddy and knew how much he liked Bubba.” 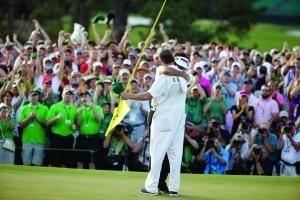 Another Christian caddy on the PGA Tour, Michael Greller, who works with current Masters champion Jordan Spieth, says faith-filled caddies focus on their on-course job, but also on their main spiritual priorities.

“I write Joshua 1:9 (“Have I not commanded you? Be strong and courageous. Do not be afraid; do not be discouraged, for the LORD your God will be with you wherever you go.”) on the yardage book I get every week. It teaches me to be calm and patient and wait on God,” Greller says of his pre-tournament preparations with the world’s No. 1 ranked golfer.

“I know that whatever happens out here is not going to change my reliance on God or my faith in Jesus.”

Scott says he was able to speak truth into Watson’s life because the same thing happened to him as a mini-tour player in 1999 while playing in Louisiana.

One of his financial backers in his own quest to play the PGA Tour was his current brother-in-law, Brian Miller, who spent time with Scott, daily talking about God and what it meant in his life. When he got engaged to Miller’s sister, Melanie, in 2002, they began to go to church together and he accepted Christ into his life as his personal savior.

By then he had left behind the dream of playing golf for a living and began working as a caddy, ultimately serving with Paul Azinger from 2003-2006.

“When Paul let me go in 2006, some of my friends were really freaked out and worried about what I was going to do for a living,” Scott says.

“I relied on Philippians 4:18 and Romans 8:28 and knew God would provide for me. I believe the Bible does what it says it’s going to do. Two years later, when one of my friends lost his job out here on the Tour, I was able to use those same verses for him and see him accept Christ into his life.”

Scott’s connection with Watson came through in another form of weekly encouragement, the PGA Tour Bible study that Scott and Watson had attended. 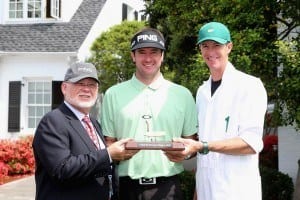 Christian PGA Tour golfer Ben Crane first connected Scott with Watson through the Bible study and then they began working together at the start of the ’06 season, where Watson won more than a $1 million dollars in his first full year on the PGA Tour. They’ve been together ever since.

“In my own personal experience, we all say or do stupid things in our life, and I don’t want a TV camera following me around all the time like it does Bubba,” Scott says.

“He is a professional athlete, and when he starts complaining about this or that, I just say, ‘This is what you signed up for when you were a rookie. You wanted to play for millions of dollars in front of millions of people.’”

While not taking any credit for himself, Scott says he has seen a huge difference in Watson’s maturity on and off the course since his second Masters win (over Spieth in 2014).

“It’s a huge adjustment for most players when they win their first major championship, especially the Masters,” Scott says. “He’s absolutely handled it better the second time than the first because he knows all eyes are on him. He was much more prepared the second time.”

Scott says he and Watson, along with their wives and others, rely on prayer and reading the Bible along with the weekly Tour Bible study when they are on the road.

“We have a lot of down time here on the road, and I have two kids ages 4-8 who I miss when I’m traveling,” Scott says. “Bubba rents a lot of houses and we tend to stay there or I’ll stay with other families I know or have met through the years. The miracle of Skype and FaceTime allows me to connect as well.”

Greller is newly married and without kids, but he says he still needs the fellowship of believers on the PGA Tour.

“I’ve been going to the Tour Bible study, and it’s been a real encouragement to me,” Greller says. “I had the chapel pastor call me this week just to pray for me on some things. That’s great fellowship.”

As for Scott’s future with Watson, caddies have no long-term contract and earn a percentage of what their player makes in prize money, getting 5 percent for making a cut, 7 percent for a top-10 finish and 10 percent for a victory, along with a small monthly salary.

“I would stay with Bubba for a long time if he wants us to,” Scott says. “He is very loyal to his friends, and I hope he will have me as his caddy. We are very close friends, spiritual friends, and the fact we work together is a bonus.”

It’s a bonus which has paid off on the course, and most importantly, in each man’s life.