Wells Thompson - So Much Bigger Than Soccer 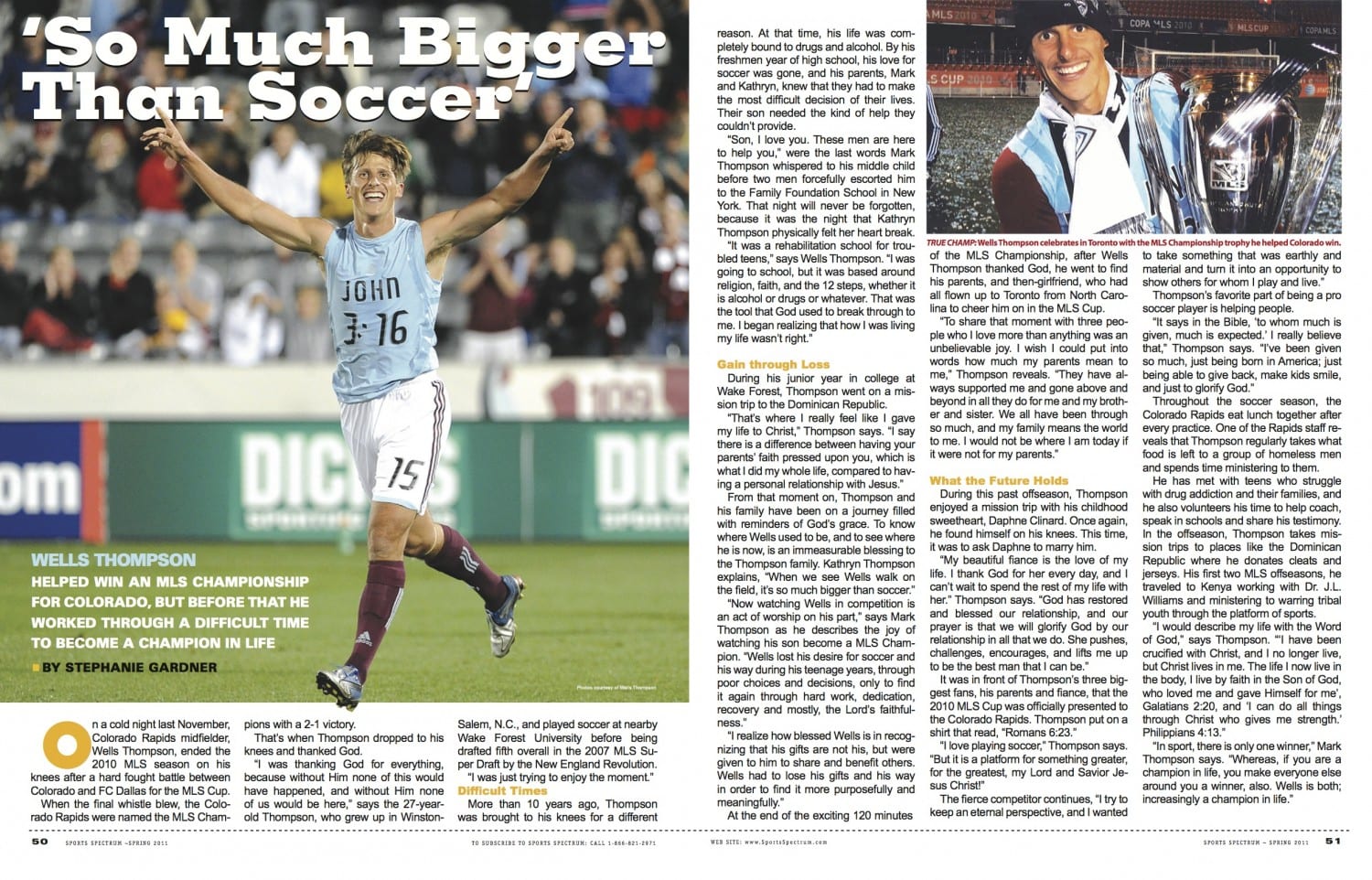 Wells Thompson helped win an MLS championship for Colorado, but before that he worked through a difficult time to become a champion in life.

On a cold night last November, Colorado Rapids midfielder, Wells Thompson, ended the 2010 MLS season on his knees after a hard fought battle between Colorado and FC Dallas for the MLS Cup.

When the final whistle blew, the Colorado Rapids were named the MLS Champions with a 2-1 victory.

That’s when Thompson dropped to his knees and thanked God.

“I was thanking God for everything, because without Him none of this would have happened, and without Him none of us would be here,” says the 27-year-old Thompson, who grew up in Winston-Salem, N.C., and played college soccer at nearby Wake Forest University before being drafted fifth overall in the 2007 MLS Super Draft by the New England Revolution.

“I was just trying to enjoy the moment.”

More than 10 years ago, Thompson was brought to his knees for a different reason. At that time, his life was completely bound to drugs and alcohol. By his freshmen year of high school, his love for soccer was gone, and his parents, Mark and Kathryn, knew that they had to make the most difficult decision of their lives. Their son needed the kind of help they couldn’t provide.

“Son, I love you. These men are here to help you,” were the last words Mark Thompson whispered to his middle child before two men forcefully escorted him to the Family Foundation School in New York. That night will never be forgotten, because it was the night that Kathryn Thompson physically felt her heart break.

“It was a rehabilitation school for troubled teens. I was going to school, but it was based around religion, faith, and the 12 steps, whether it is alcohol or drugs or whatever,” Wells Thompson describes. “That was the tool that God used to break through to me. I began realizing that how I was living my life wasn’t right.”

During his junior year in college at Wake Forest, Thompson went on a mission trip to the Dominican Republic.

“That’s where I really feel like I gave my life to Christ,” Thompson says. “I say there is a difference between having your parents’ faith pressed upon you, which is what I did my whole life, compared to having a personal relationship with Jesus.”

From that moment on, Thompson and his family have been on a journey filled with reminders of God’s grace. To know where Wells used to be, and to see where he is now, is an immeasurable blessing to the Thompson family. Kathryn Thompson explains, “When we see Wells walk on the field, it’s so much bigger than soccer.”

“Now watching Wells in competition is an act of worship on his part,” says Mark Thompson as he describes the joy of watching his son become a MLS Champion. “Wells lost his desire for soccer and his way during his teenage years, through poor choices and decisions, only to find it again through hard work, dedication, recovery and mostly, the Lord’s faithfulness.”

“I realize how blessed Wells is in recognizing that his gifts are not his, but were given to him to share and benefit others. Wells had to lose his gifts and his way in order to find it more purposefully and meaningfully.”

At the end of the exciting 120 minutes of the MLS Championship, after Wells Thompson thanked God, he went to find his parents, and then-girlfriend, who had all flown up to Toronto from North Carolina to cheer him on in the MLS Cup.

“To share that moment with three people who I love more than anything was an unbelievable joy. I wish I could put into words how much my parents mean to me,” Thompson reveals. “They have always supported me and gone above and beyond in all they do for me and my brother and sister. We all have been through so much, and my family means the world to me. I would not be where I am today if it were not for my parents.”

What the Future Holds

During this past off-season, Thompson enjoyed a mission trip with his childhood sweetheart, Daphne Clinard. Once again, he found himself on his knees. This time, it was to ask Daphne to marry him.

“My beautiful fiance is the love of my life. I thank God for her every day, and I can’t wait to spend the rest of my life with her.” Thompson says. “God has restored and blessed our relationship, and our prayer is that we will glorify God by our relationship in all that we do. She pushes, challenges, encourages, and lifts me up to be the best man that I can be.”

It was in front of Thompson’s three biggest fans, his parents and fiance, that the 2010 MLS Cup was officially presented to the Colorado Rapids. Thompson put on a shirt that read, “Romans 6:23.”

“I love playing soccer,” Thompson says. “But it is a platform for something greater, for the greatest, my Lord and Savior Jesus Christ!”

The fierce competitor continues, “I try to keep an eternal perspective, and I wanted to take something that was earthly and material and turn it into an opportunity to show others for whom I play and live.”

Thompson’s favorite part of being a professional soccer player is helping people. “It says in the Bible, ‘to whom much is given, much is expected.’ I really believe that,” Thompson says. “I’ve been given so much, just being born in America; just being able to give back, make kids smile, and just to glorify God.”

Throughout the soccer season, the Colorado Rapids eat lunch together after every practice. One of the Rapids staff reveals that Thompson regularly takes what food is left to a group of homeless men and spends time ministering to them.

He has met with teens who struggle with drug addiction and their families, and he also volunteers his time to help coach, speak in schools and share his testimony. In the offseason, Thompson takes mission trips to places like the Dominican Republic where he donates cleats and jerseys. His first two MLS offseasons, he traveled to Kenya working with Dr. J.L. Williams and ministering to warring tribal youth through the platform of sports.

“I would describe my life with the Word of God,” says Thompson. “‘I have been crucified with Christ, and I no longer live, but Christ lives in me. The life I now live in the body, I live by faith in the Son of God, who loved me and gave Himself for me’, Galatians 2:20, and ‘I can do all things through Christ who gives me strength.’ Philippians 4:13.”

THE INCREASE: For Such A Time As This - Aubree Munro