The Scapegoat: Dealing with Blame and Defeat

But that’s life. We’re human. And we mess up. How do you react when you’re the one to blame for defeat? How do you respond to God when you lose? Former Indianapolis Colts and Washington Redskins punter Hunter Smith, who is featured on this year’s Power To Win DVD, dropped the snap on a game-tying extra point, which ended up being the last play of his otherwise successful career. But as a Christian, he used the moment of blame, shame and defeat to lead people to the Cross. 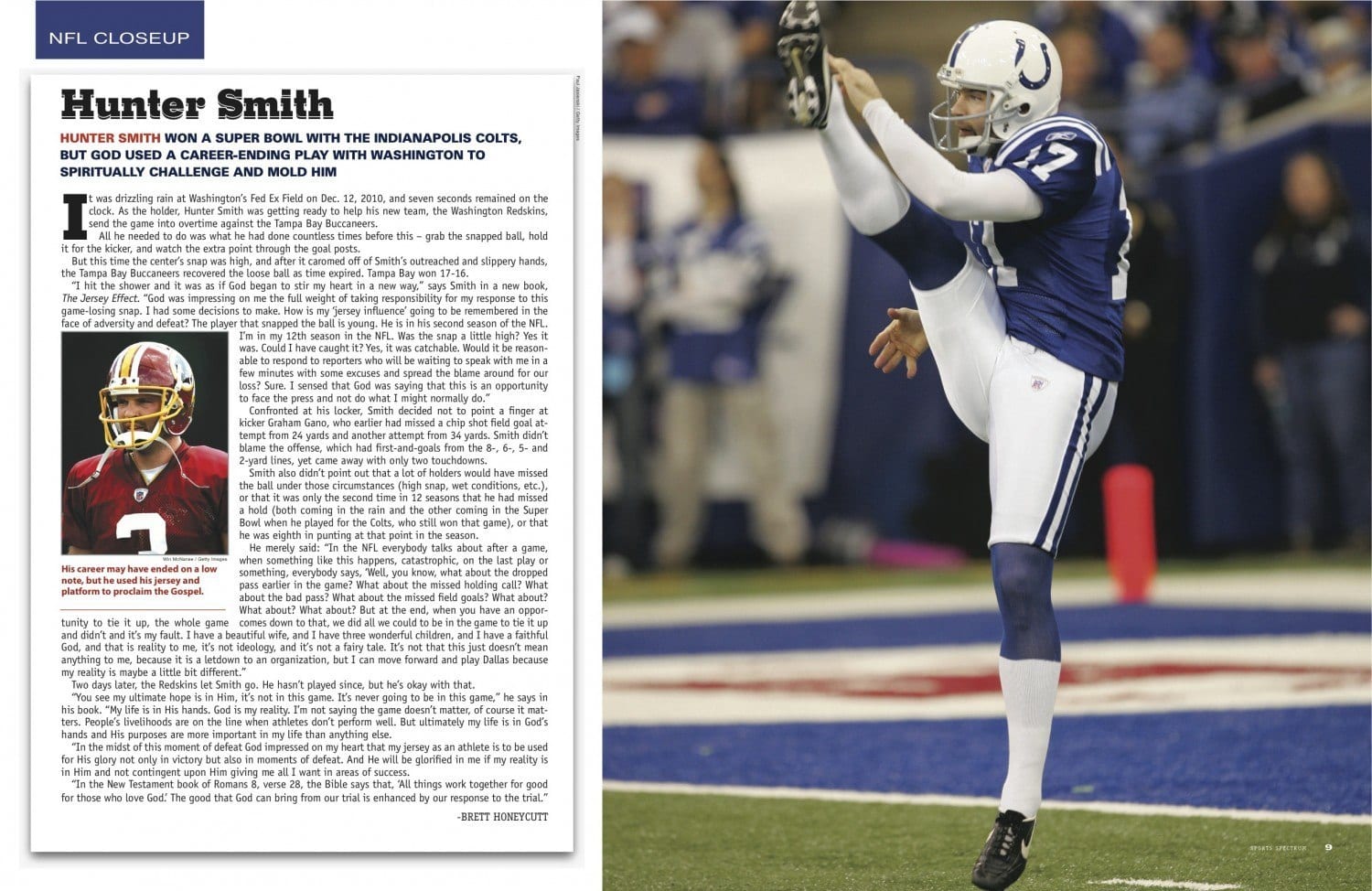 It was drizzling rain at Washington’s Fed Ex Field on Dec. 12, 2010, and seven seconds remained on the clock. As the holder, Hunter Smith was getting ready to help his new team, the Washington Redskins, send the game into overtime against the Tampa Bay Buccaneers.

All he needed to do was what he had done countless times before this – grab the snapped ball, hold it for the kicker, and watch the extra point through the goal posts.

But this time the center’s snap was high, and after it caromed off of Smith’s outreached and slippery hands, the Tampa Bay Buccaneers recovered the loose ball as time expired. Tampa Bay won 17-16.

“I hit the shower and it was as if God began to stir my heart in a new way,” says Smith in a new book, The Jersey Effect. “God was impressing on me the full weight of taking responsibility for my response to this game-losing snap. I had some decisions to make. How is my ‘jersey influence’ going to be remembered in the face of adversity and defeat?

The player that snapped the ball is young. He is in his second season of the NFL. I’m in my 12th season in the NFL. Was the snap a little high? Yes it was. Could I have caught it? Yes, it was catchable. Would it be reasonable to respond to reporters who will be waiting to speak with me in a few minutes with some excuses and spread the blame around for our loss? Sure. I sensed that God was saying that this is an opportunity to face the press and not do what I might normally do.” 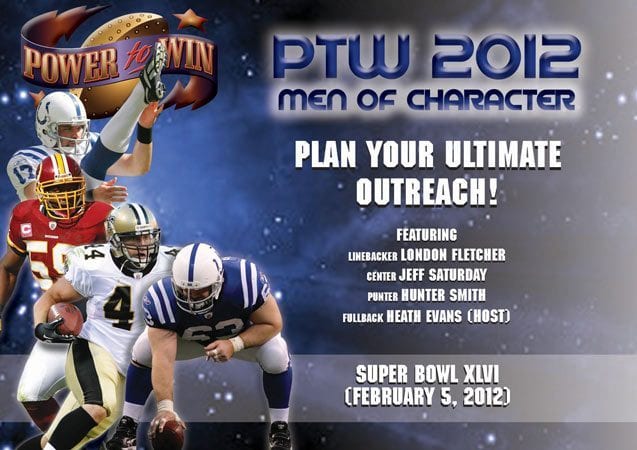 Confronted at his locker, Smith decided not to point a finger at kicker Graham Gano, who earlier had missed a chip shot field goal attempt from 24 yards and another attempt from 34 yards. Smith didn’t blame the offense, which had first-and-goals from the 8-, 6-, 5- and 2-yard lines, yet came away with only two touchdowns.

Smith also didn’t point out that a lot of holders would have missed the ball under those circumstances (high snap, wet conditions, etc.), or that it was only the second time in 12 seasons that he had missed a hold (both coming in the rain and the other coming in the Super Bowl when he played for the Colts, who still won that game), or that he was eighth in punting at that point in the season.

He merely said: “In the NFL everybody talks about after a game, when something like this happens, catastrophic, on the last play or something, everybody says, ‘Well, you know, what about the dropped pass earlier in the game? What about the missed holding call? What about the bad pass? What about the missed field goals? What about? What about? What about? But at the end, when you have an opportunity to tie it up, the whole game comes down to that, we did all we could to be in the game to tie it up and didn’t and it’s my fault. I have a beautiful wife, and I have three wonderful children, and I have a faithful God, and that is reality to me, it’s not ideology, and it’s not a fairy tale. It’s not that this just doesn’t mean anything to me, because it is a letdown to an organization, but I can move forward and play Dallas because my reality is maybe a little bit different.”

Two days later, the Redskins let Smith go. He hasn’t played since, but he’s okay with that.

“You see my ultimate hope is in Him, it’s not in this game. It’s never going to be in this game,” he says in his book. “My life is in His hands. God is my reality. I’m not saying the game doesn’t matter, of course it matters. People’s livelihoods are on the line when athletes don’t perform well. But ultimately my life is in God’s hands and His purposes are more important in my life than anything else.

“In the midst of this moment of defeat God impressed on my heart that my jersey as an athlete is to be used for His glory not only in victory but also in moments of defeat. And He will be glorified in me if my reality is in Him and not contingent upon Him giving me all I want in areas of success.

“In the New Testament book of Romans 8, verse 28, the Bible says that, ‘All things work together for good for those who love God.’ The good that God can bring from our trial is enhanced by our response to the trial.”

This story was published in the Winter 2012 issue of Sports Spectrum. Hunter Smith is featured in this year’s Power To Win video and is about to release his new book, “The Jersey Effect”.