From the Archives - Kevin Durant 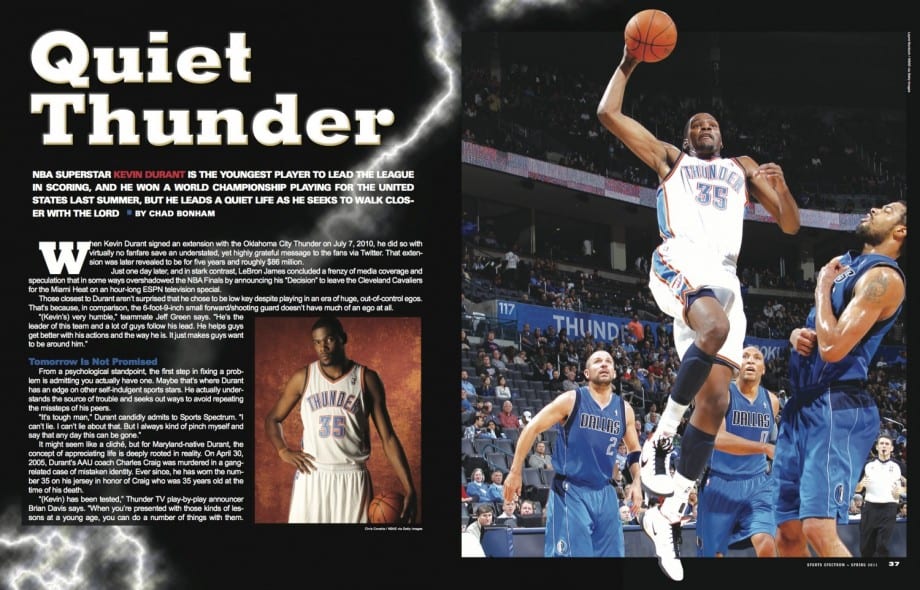 NBA superstar Kevin Durant and the Thunder came up short in the NBA Finals last year, but he has a promising future and leads a quiet life as he seeks to walk closer with the Lord.

When Kevin Durant signed an extension with the Oklahoma City Thunder on July 7, 2010, he did so with virtually no fanfare save an understated, yet highly grateful message to the fans via Twitter. That extension was later revealed to be for five years and roughly $86 million.

Just one day later, and in stark contrast, LeBron James concluded a frenzy of media coverage and speculation that in some ways overshadowed the NBA Finals by announcing his “Decision” to leave the Cleveland Cavaliers for the Miami Heat on an hour-long ESPN television special.

Those closest to Durant aren’t surprised that he chose to be low key despite playing in an era of huge, out-of-control egos. That’s because, in comparison, the 6-foot-9-inch small forward/shooting guard doesn’t have much of an ego at all.

“(Kevin’s) very humble,” former teammate Jeff Green says (Now with the Boston Celtics). “He’s the leader of this team and a lot of guys follow his lead. He helps guys get better with his actions and the way he is. It just makes guys want to be around him.”

Tomorrow Is Not Promised

From a psychological standpoint, the first step in fixing a problem is admitting you actually have one. Maybe that’s where Durant has an edge on other self-indulgent sports stars. He actually understands the source of trouble and seeks out ways to avoid repeating the missteps of his peers.

“It’s tough man,” Durant candidly admits to Sports Spectrum. “I can’t lie. I can’t lie about that. But I always kind of pinch myself and say that any day this can be gone.”

It might seem like a cliché, but for Maryland-native Durant, the concept of appreciating life is deeply rooted in reality. On April 30, 2005, Durant’s AAU coach Charles Craig was murdered in a gang-related case of mistaken identity. Ever since, he has worn the number 35 on his jersey in honor of Craig who was 35 years old at the time of his death.

“(Kevin) has been tested,” Thunder TV play-by-play announcer Brian Davis says. “When you’re presented with those kinds of lessons at a young age, you can do a number of things with them. Kevin has chosen to take those bad moments and turn them into positives. He’s grasped the concept that tomorrow is not promised so he’s going to be as good as he can today and if he’s given tomorrow, he’ll be better tomorrow.”

Durant’s uncanny ability to remain grounded and levelheaded can also be traced back to his family and a solid understanding of his Christian faith that was cultivated while attending a private school.

“I was always intrigued simply about how we got here,” he says. “Why do we do the things we do? Who made us like this? My mom always sat me down and talked to me and I have spiritual teachers that help me out.”

These days, he relies on regular chapel attendance during the season, a spiritual coach and his teammates as a means to a stronger “walk with the Lord.”

“In the Bible, the Lord exalts humility and that’s one thing I try to be all the time,” Durant says. “I’ve just got to be thankful to the Lord for the gifts He’s given me. My gift back to Him is to always be humble and to always try to work as hard as I can. I’ve got to continue to be that way.”

And if any of those things fail, Durant knows he can always count on his family to get the job done. His mother, Wanda Pratt, was a post office security officer and his father, Wayne Pratt, worked for the Library of Congress. Durant’s grandmother, Barbara Davis, also played a key role in his spiritual and emotional growth.

“I know that if I try to get a big head, my mom is going to do a great job of bringing me back down to size,” Durant says with a smile. “I have the best of both worlds with the coaches we have here and my parents and my family doing it back at home. I’m in pretty good hands.”

Shining on the World Stage

To describe Durant’s rise to NBA greatness as meteoric might be an understatement. After an All-American freshman year at Texas that also resulted in multiple national player of the year awards, he made the seemingly easy decision to forego his remaining three years and enter the 2007 NBA Draft. Although picked second by the Seattle Sonics behind Portland Trailblazers center Greg Oden, Durant was named NBA Rookie of the Year after breaking a 40-year rookie record by averaging 20.3 points per game.

Not much changed when the Sonics moved to Oklahoma City. As a member of the newly christened Thunder, Durant continued his climb toward NBA stardom. By the 2009-10 season, he was playing in his first All-Star Game and leading Oklahoma City to a memorable second round in the playoffs where the Thunder lost a tough six-game series against the eventual champion Los Angeles Lakers.

He ended the season by leading the NBA in scoring (30.1 points per game), and becoming the league’s youngest scoring champ at 21 years of age.

But it was the following summer where Durant’s stock truly began to rise. At the 2010 FIBA World Championship in Turkey, he was clearly the star of a team devoid of Team USA’s principal players such as Kobe Bryant, Dwyane Wade, Chris Bosh and LeBron James. Durant, who scored a U.S. World Championship record 38 points in the semifinals against Lithuania, averaged 22.8 points per game en route to the gold medal and was named tournament MVP after leading the U.S. to its first FIBA World Championship since 1994.

“It was an unbelievable feeling,” Durant says. “Words can’t explain how excited I was when the gold medal game was over and we’d won. It felt like we’d won the NBA championship. It was a great feeling to represent everyone back here in the USA and to come together with that group of guys and do something that nobody thought we could do with the team we had.”

According to Brian Davis and others within the Thunder organization, the experience has improved Durant’s confidence and given him a greater impetus as Oklahoma City’s de facto leader. It’s a role Durant has been preparing for from day one.

“(General Manager) Sam Presti and (head coach) Scott Brooks both say all the time, to anybody who will listen, what a great thing it is for the team and for the organization that their best player is also their hardest worker,” Davis says. “Back during Kevin’s rookie season, we were on the road in Minnesota. The hotel in Minneapolis had an athletic club on its third floor. It was late and the club was about to close so some of the coaches ran down there to get in a quick workout. There was hardly anybody in there. All of the sudden they heard a ball bouncing. There was a basketball court around the corner. They went over there to see who was bouncing the ball and it was Kevin in there by himself getting some shots up. That’s just what he does.” 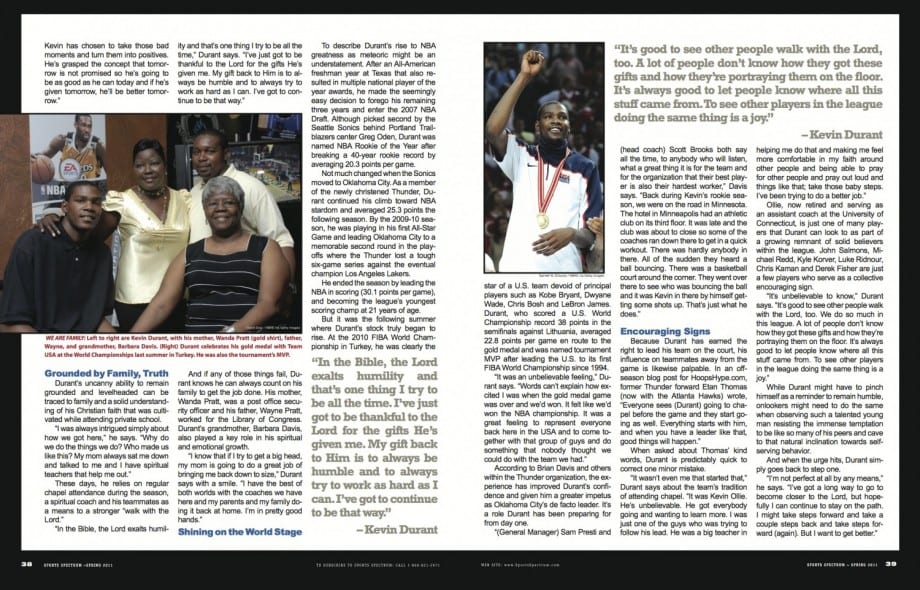 Because Durant has earned the right to lead his team on the court, his influence on teammates away from the game is likewise palpable. In an offseason blog post for HoopsHype.com, former Thunder forward Etan Thomas (now with the Atlanta Hawks) wrote, “Everyone sees (Durant) going to chapel before the game and they start going as well. Everything starts with him, and when you have a leader like that, good things will happen.”

When asked about Thomas’ kind words, Durant is predictably quick to correct one minor mistake.

“It wasn’t even me that started that,” Durant says about the team’s tradition of attending chapel. “It was Kevin Ollie. He’s unbelievable. He got everybody going and wanting to learn more. I was just one of the guys who was trying to follow his lead. He was a big teacher in helping me do that and making me feel more comfortable in my faith around other people and being able to pray for other people and pray out loud and things like that; take those baby steps. I’ve been trying to do a better job.”

Ollie, now retired and serving as an assistant coach at the University of Connecticut, is just one of many players that Durant can look to as part of a growing remnant of solid believers within the league. John Salmons, Michael Redd, Kyle Korver, Luke Ridnour, Chris Kaman and Derek Fisher are just a few players who serve as a collective encouraging sign.

“It’s unbelievable to know,” Durant says. “It’s good to see other people walk with the Lord, too. We do so much in this league. A lot of people don’t know how they got these gifts and how they’re portraying them on the floor. It’s always good to let people know where all this stuff came from. To see other players in the league doing the same thing is a joy.”

While Durant might have to pinch himself as a reminder to remain humble, onlookers might need to do the same when observing such a talented young man resisting the immense temptation to be like so many of his peers and cave to that natural inclination towards self-serving behavior.

And when the urge hits, Durant simply goes back to step one.

“I’m not perfect at all by any means,” he says. “I’ve got a long way to go to become closer to the Lord, but hopefully I can continue to stay on the path. I might take steps forward and take a couple steps back and take steps forward (again). But I want to get better.”

Kevin Durant was featured in the Spring 2011 issue of Sports Spectrum.