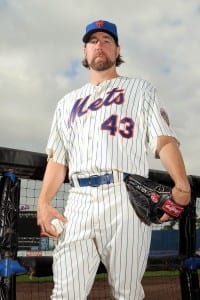 R.A. Dickey’s career has taken more dips and dives than a knuckleball, which is exactly what has stabilized his stay with the New York Mets at age 37

It’s so tough to tame that there is just one active major league knuckleballer: R.A. Dickey.

“I had to unlearn things that I had learned in my previous 20 years of throwing a baseball,” Dickey tells Sports Spectrum. “I had to unlearn in an effort to relearn the proper mechanics of throwing a knuckleball. That was a really trying time; God was helping me to endure and persevere. I had a lot of self-doubt. I made a lot of bad decisions as far as what I put my time into.”

But in 2010, after being called up from AAA Buffalo in May, Dickey got an opportunity with the New York Mets, and this time pitched at career-high levels; going 11-9 with a 2.84 ERA (seventh in the National League).

And in 2011, he spent his first full season without a trip to the minors, posting a staff-best 3.28 ERA and logging a team-high 208.2 innings for the Mets.

This season, he’s off to a 5-1 start. It’s possible the All-Star game could be on his horizon. Not too bad for a journeyman knuckleballer.

“It’s been a real journey for me and it’s coincided with my journey as a knuckleballer starting in 2005,” he says. “…as an adult, from ages 32-36, I feel like I’ve really matured. God’s really grown me up in a lot of ways. He’s really impressed a lot of time and energy in helping me to feel loved and worthy and that’s been a big difference maker for me as far as my professional career has gone.”

Knuckleballers have been known for pitching well into their 40s; Hall of Famer Hoyt Wilhelm retired five days from his 50th birthday! Which begs the question, how long will he continue playing?

“I feel like my body will be able to endure into my 40s, however, this game has demanded a lot of me and my family,” Dickey says. “If God calls me away from baseball tomorrow, I would gladly walk away knowing that He has given me an incredible story to tell and an incredible journey where He has taught me so many different things. But He still continues to make me hungry to compete and make me passionate to pursue a craft that’s very hard. It’s a very specialized thing and He’s given me a passion to try to cultivate that craft.”

By Aaron May
This story was published in the Sports Spectrum Summer 2012 DigiMag.